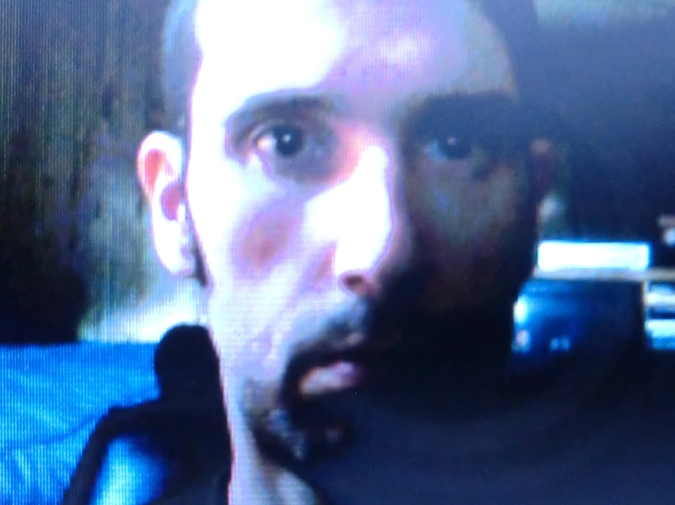 I meet with Kilpatrick at Taco Bell. The neighborhood is a former Detroit ghetto spruced up without the supple aid of gentrification. Though we are to embark on a dialogue as free from subtly as Kilpatrick’s recent novella Sucker June, he seems scantily conscious enough to note how the community that refused to foster him through his childhood residence here (and why should it, he agrees) has restored itself in an effort beyond the casual greed of better living, despite racist confusions Kilpatrick may list, or whichever backward accusations of “whitewashing” he means to revenge upon his own kind, because certainly he wields no preference toward any conceit endearing humanity, foremost his own, and the lack thereof, as he’ll forever be underlining (he’s not too ready to call himself white, but who should be). Before the recorder settles, what perverse motivation will his nihilism extract about the newly cheerful surroundings he brags having had suffered through as an excuse to pump further vitriol into the atmosphere? Kilpatrick would concur, at least, perhaps with less fuss than others, presuppositions borne of such paper doll luxuries as this (he does afford his mirror) are the whitest thing about him, although he lays claim, like many whites, to the backend miscasting of his bloodline somewhere native (in part because of the rapes that spurred us, especially his type, present, etc.). Meanwhile, my appetite, skirmishing for the synthetic gruel in front of us, is, like Kilpatrick himself, sufficiently audible.

Kilpatrick on the etymology of his dickheadedness: In the early 2000s, you could instant message your hate sans consequence, a rite of puberty against those who would deprive, a Ferris wheel of jocular slurring without deeper racist undertones of smug, implied superiority, or that too, according to the asshole, but this wayward stupidity felt like progress somehow. Superiority can rear itself, regardless, which was never my goal. The goal was to cause the most damage. Existence was not always enough to make one’s oppression airborne. So what if people got hurt by clever use of language? What’s your blood expose? There was little explication beneath the sound. The insult standing on its head had only your absence to blame. Kids my age did our tadpole cybering, we invented the type job, or screamed our suicides together and the irony wasn’t about anyone’s fucking long or short term damage. It was just assault for assault sake. We were facetiously mean and the freelance wildness of it was a healthy confrontation between the overall purposelessness of trying to connect anyway. What these birth pangs of the internet led to was the blazon over-proclamation of adulthood people suffer in their twenties, once whichever workplace adjusts their minds (into economies such as marriage), so now any victim is in charge, under the handheld guidance of our blankly enforced utopia. And good for victims. Some are in on the joke. That everyone’s so willing to press charges is a business decision, less big brother, more the police as choice marketing. You really know pain, you know there’s an unending laughter to it. I blame myself for being too old to see how the pious pose works in or out of bed. No matter, my body’s crapping out. It’s okay. There is a much greater evil to be achieved in focusing your speech by the unit. Let this be a niche, at least. Let me publish five more years, a lot to ask, but I’m wrapping up. I practice evil at the keyboard and let me tell you, it is barely a niche anymore, and you won’t be hired or saluted at the salon. Good. Because wherever a few of us are even tiny together the art still wanes. I’m happy as an artist to continue being mister persona non grata of the teen-headed flipped up collar in every field, but if I keep staying so broke I might have shoot someone. And that’s okay too. It’s all always only another tradition. My generation was born on top of Columbine. Too between to be counted and I’m naïve to hope we disappear with a small amount of graffiti on our state-sponsored gravesite lockers.

Kilpatrick on the artist’s political responsibilities (these are apparently multiple): Hate has more borders than I can muster into the capability of a vision. That’s why I scream in short bursts. Why I soil my blindfold. Hide with me inside the sand castle of a striped creed, away from anyone who detests decoration. And this country brutally aligns them. I got such Victorian insides I’m like the third on every name. How many juniors have duck-walked into art? Are we writing to gain office? A career move? Yes, the franchises are spread (such good citizens in these programs), and they told me, forthright, who I am earns me no place, though I hold the necessary degrees to flag my abounding coffin. Just because jail is the proper response for some doesn’t mean a stern talking to ever helps. A stern talking to brings so much 911 into it. But we’re a country of amateur lecturers. We can’t even buy a metaphor without cliché. I’m attacked by drawing breath. Oh, I vomited in this Taco Bell when I was seven. A woman rounded her work station and told me I was choking, that I should vomit, and I did. I was always choking a little, but I don’t believe the food had entered my mouth. She resembled Maria Falconetti. Everyone I like does. I continued dining out cheap until a needle grew right through my groin and I no longer required to feel my padding. You grow up around here, sometimes fast food becomes the viable treat you never stop rewarding yourself with. A need for sedatives is the only human unifier. They catch you fat or thin.

Kilpatrick on his latest deed: I’m the fuck poodle born in most people’s way, yipping through my lactose, tit on empty, no diff, clutch the bottle just as sensual, right? In the nineties, there used to be a channel on TV where they showed a telephone hotline and you dialed in a code for the music video you wanted to see. My entire body of writing can be retrieved from this queue. You watched programming you couldn’t afford. Forget the list of objects blindly obtained, try to consider the happenstance braved into being by the experiences you are both subjected to and subject yourself to, beyond just art. Not all artists are dependent on art. Some bring the world their tit. Nothing's more offensive to an inadequate lover than the masturbation invalidating them. That's why that term's always thrown at poetry. People don’t procreate to weigh their ideologies. There is some justice to it. (Here he laughs.) Some allow the events in their lives to supervene without subverting them with too much overt brooding and can produce great work beside that. Personally, again, I am stuffed with hate. I’m pregnant with my own chipped teeth. The market has gluttonies which exclude me and I am grateful. We’re all in the market’s paw. No populace will change it. What’s a better word than hate? What bigger rage than words? I regret fighting off my crib. Some kill their crib with ease. Mine got alimentary. Not every suicide occurs as fast as I’m trying. Which prosperity is this? Options in life? What fucking life? I’ll tell you about options the second I’m introduced to one aside from the main lie money tells: that I can create my own. See how this so-called lettuce sticks to the window? I press down and the glass fractures.

Kilpatrick on and on: It’s a country far too proud about what you represent yourself with. I permit myself no exception. You’ll see I mean real damage to my person. The only autopsy I hijack is mine, motherfucker. I ever get read, it’s curtains for the world. Sucks how we don’t end soon. The reward ain’t in sight. I can’t calm down because blinking is a fact. I took all my beatings from gangs before high school. So the bullying there was pleasant. It was a small Catholic affair. The Christians drained certain portions of the working class bound to the city of a monthly fee, if you wanted your white boy kicked around forty percent less. It was a small place and I had already retired to watch films all day. I spoke little and looked up less. Then the media event of Columbine imbued a miraculous alleviation for my kind and the potential for inherent violence was publically honored. A time of great Zen happiness resulted. Your jock had a much more friendly antagonism for you, a respect, as they would call it. They were right to wear those kid gloves around us. It wasn’t about hypersensitivity yet. It was about advancing our wherewithal to inflict a new and better damage, based not on old issues of race or class or general differences, but aesthetic influence, or so they said. There is that whatsoever with inherent restrictions and there is art. This brief bliss was ended for me with the introduction of the monogamous relationship. I stumbled on my youth to implant the timeless cliché of that particular violence in my chemicals. You want to care for someone free from what society has done to the idea and you suffer twice. And I had no problem going directly satanic as a response to this being the reality I incurred. So the resulting calamity is available now in prose shape and the tally has been a predominant ought. When I say thanks, I mean it.

I snap the device shut to excise any onslaught of solipsism for those who require warnings. The man is not well and intends to publish more proof of it. What little dignity remains for the self-instituted ending of a person this forced into his unnecessary pose? He’s a giver of obscure blankets, an example of how whites spread smallpox through the need to identify with anyone other until their livelihood strangles you. They’ll narc a path right alongside the jail cell they put you in, often without meaning to, maintaining a full serious protest of the status quo to which they heedlessly belong. Whether their own kind has really rejected them or not does not exonerate them from the damage they think they are still capable of accomplishing. They frame everyone, starting inwardly. Likewise, Kilpatrick exemplifies misogyny in the bogus extreme of intending its exposure. Is appointing the living exposure of his breed’s mistake an excuse to employ the carnage he enjoys? Or is he propagating a detrimental mindset for the gender that bravely opposes him? Either way, please take the patience to accompany me in the sociological exploration of those misfit imposters who till their own plantations in the name of such selfish public harms masquerading under the masquerade of art. I have never claimed to be anything but a journalist in the public service. This interview has been edited for content and the police have been notified of any threats to which the author alluded.

Alfred Wichly is the editor of the forthcoming Mother Tongue of the Foreign Born: A Neutered Anthology.