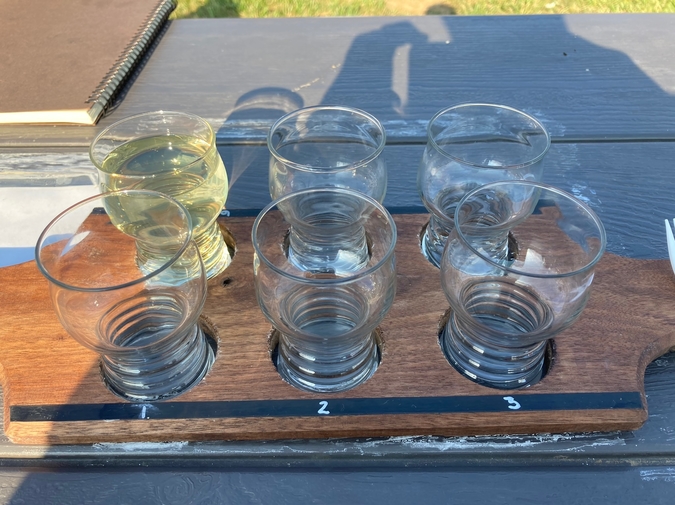 I’m staring holes into the platter of toothpicked pineapple chunks to avoid names and faces and the lurid aquamarine-schemed slideshow of available Gulf Coast and Yucatán Peninsula properties, conjuring foggy narratives of which nearby communities the poloshirted man and woman might come from, if families await them after their shifts, if they have cats, do they rent or own, do they fuck around on their partners, do they fuck around with each other, do they fuck around with God, do they drive to work or take public transit, do they go for the chicken or fish, are they twice or thrice daily shitters, but mostly I’m wondering how and why did they land performative jobs like these because this level of persistence and salesmanship and tolerating hecklers and stonefacing American tourists like Gene should demand a drama degree, which, cool, great, Gene just now claimed to actually have “under [his] belt” as part of his shtick rebutting the poloed pair’s commissioned advances over the last two hours of relentless pitching while he lounges between me and Mom, his beshorted white legs and flip-flopped feet on the chair in front of him in our overlarge, overcold conference room encasing just the five of us, old Gene the prankster, ha ha, Gene the jokey jokemeister pitching right back at our timeshare sales duo a fat yarn about being an out-of-work actor (mechanical engineer) just married to my mom so he can’t afford even their lowest tier of offerings what with the wedding costs (they’re not married) and my tuition payments (I graduated nine years ago, student debt paid off last January) and Mom paying rent (Mom is retired, living off Gene’s salary) while Gene looks for paid stage gigs (for ten years they’ve held season tickets to our theater’s spring program), but Gene, as Head of Household, was required to list an occupation on the Royal Mexico Resorts Welcome Event sign-in sheet to secure our free post-presentation buffet, the buffet for which I’ve lost appetite, so I’m now constructing a mental pool for how long these two can keep up the corporate veneer before they go insane or at least pop Gene in the teeth or at least say Okay you’re done no more pineapple and then whisk away the tray of pineapple Mom and I have not stopped noshing and ogling and noshing since Gene laid down his gauntlet of actordom fifteen minutes ago despite his gainful employment (in spite of, I will learn later, an actual degree in drama, so), so now I’m terrified me and Mom won’t have an inanimate thing to center us anymore, that we’ll have to acknowledge Gene or look at each other or the slideshow or oh God I’ll have to look these resort employees in the face, which I’m not prepared to do, not as long as they’re actual people, people doing their jobs people with families people with names on birth certificates and not just stamped on shirt-pinned tags, so for now they are robots just robots whose brass name tags are really on/off buttons, who do not have families who do not eat who do not shit who will never understand conceptually the divine, until I catch unnervingly Gene saying my name as part of a big culminating fib about my grad party, how he blew as much cash on renting out the neighborhood Mexican restaurant (Gene bought a sheet cake and grilled Costco steaks rare in the backyard) as he did on his wedding because, he says, I deserved it, because he loves me like his own son, because he believes, I’m hearing for the first time, believes I’m destined for great things, and by reflex I look up from the pineapple, but then I regret it profoundly, instantly, wishing to a God I don’t know or a Satan I do or Whoever might be watching that I could take it back, bury my head again without notice, because now I see finally the woman—Lina, says her name tag—I see the rigid tremor in Lina’s knuckles, the smile which remains on the teeth but less so the eyes, and I see finally her counterpart, the nice-smelling tall guy whose name tag I can’t bring myself to read but who Gene keeps calling Rico, his chin slumping below a polo collar worn and curling at the tips (Gene buys collar stays) and my only desire now is to make it outside just get to the other side out from this strangled conference room out from the air conditioning back into humid Yucatán air away from the pineapple now gathering flies far away from the flakes of white nail polish piling in a tiny mound beneath Lina’s twitching fingers.

Danny Lang-Perez is a fiction writer from up and down the West Coast. This is his first publication. He is an Assistant Editor at Nashville Review and lives in Nashville, TN where he is an MFA candidate in Fiction at Vanderbilt University. Twitter: @dannylangperez