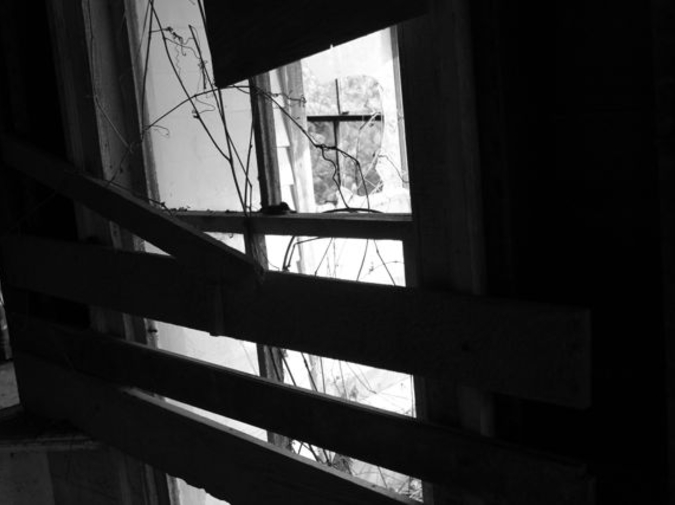 My girlfriend moved out. She gave me back the lease the next day. “I’m not sorry,” she said, but she agreed to stay for afternoon coffee. We sat by the window. The coffeepot gurgled.

“I want a French press,” she said.

“I’ll buy you a French press if you stay,” I said.

“Good one,” she said. A huge white smile. Her dry, tan cheeks. That face, so small and bright like a cat.

“Is this a towel?” she said, touching my new kitchen curtain, which was a towel.

“My sewing machine’s still in my truck,” she said. “If you can help me unpack it I’ll sew you a curtain.”

She’d taken most of the dishes. I poured gin into the rest of the Sprite and popped enough popcorn to fill the ice bucket. The sewing machine hummed and she hummed almost in harmony. The towel came down and in its place went a clean sheet with crisp hems. A white so white it was almost blue.

She kept yawning. “Moving wore me out,” she said. She asked if she could sleep in my bed.

“I sleep better in a strange bed,” she said, pushing a knee against me.

She had to borrow my toothbrush. While she was in the bathroom I stubbed my toe making our bed so she could get in it.

Where do you live? I asked without saying it. She climbed on top of me and I put my hands where she liked them. Do you live alone?

That smile again, sleepy and blue-white as the curtain drifting in the window.

I set out bagels and cereal and a pitcher of milk. There were no more actual clean dishes so she filled a little dipping bowl with Frosted Flakes and ate with her knees pulled up to her chest. We listened to the dogs barking next door.

She woke up her phone and looked at the time. “I have to leave,” she said.

“That’s too bad.” I watched the curtain drift.


The front door opened and shut and the apartment heaved like a giant lung. I posted a Craiglist roommate wanted ad and wrote SERIOUS INQUIRIES ONLY. I made myself a very tiny bowl of Frosted Flakes. I ate the bowl and refilled it, then I ate that bowl, then I refilled and ate the bowl until I was out of milk, and kept going until I was out of Frosted Flakes. Someone knocked.

There was a man standing there, very tall, about my age. He asked if he could come in.

“Is this a serious inquiry?” I asked.

“Not sure yet,” he said. He moved from room to room. “Are these bills?” he asked at my desk. “You should open them.”

He pointed to the dishes in the sink and pinched his nose with her other hand.

“You don’t have any real dishes,” he said.

I told him about my girlfriend with the blue-white smile who sewed curtains. Who ate the tiniest bowl of Frosted Flakes. I used my hands to show him how tiny.

“Oookay,” he said, making the word very long. Then he left.


The world past the curtain was dark. I didn’t sleep well.


The Craigslist post was still up. I answered the door to a woman who had short blonde hair and wore high-top sneakers.

She was peering into the sink. “Hmm,” she said.

“I have some food,” I said, opening the fridge. “Oh, but I ate all the cereal. Do you want a bagel?” I told her about the woman and the tiny bowl because I couldn’t help it. She was wandering around the apartment and I followed her, talking. “Look,” I said when showing her the size of the bowl.

She liked the apartment. I liked her hair. I offered her some orange juice. We drank orange juice together at the kitchen table, listening to the dogs. When the bottle was half-full she pulled out airplane bottles of vodka from her purse and we added them to our glasses.

Sometime in the very early morning I heaved myself to my bed from the couch, scraping my wrist on the warm open zipper of her jeans.


I woke up at noon. I went to the couch and poked her shoulder until she rolled over to face me.

She squinted at her phone. “What’s the wi-fi password here?”
I told her the wrong password on purpose.

“I need food,” she said and stretched like a cat. “Where can we get food?”

I told her again that I had food.

“Nah. I need something more than a teeny little bowl—“ she imitated the bowl with her hands and smiled at me. She had pillow marks on one cheek. “C’mon,” she said, moving toward the door. “There are better breakfasts out there. We need something substantial.”

“You have pillow marks on your face,” I said.


She went to brunch, I guess. The dogs barked. I could hear her barking back. I locked the door, then opened the window and listened to the loud sound of her going. I washed all the not-dishes in the sink until the drainer was stacked full and my hands hurt from the hot water. I pressed the warm, clean tiny bowl against my cheek. I slid it toward my mouth and kissed it and kissed it until it went cold.

Lindsey Gates-Markel (lindseygatesmarkel.com) is a lifelong ham born and raised in the Midwest. Her work has recently appeared in Sundog Lit, Smokelong Quarterly, and Whiskeypaper.