A Man Got Shot in Ohio 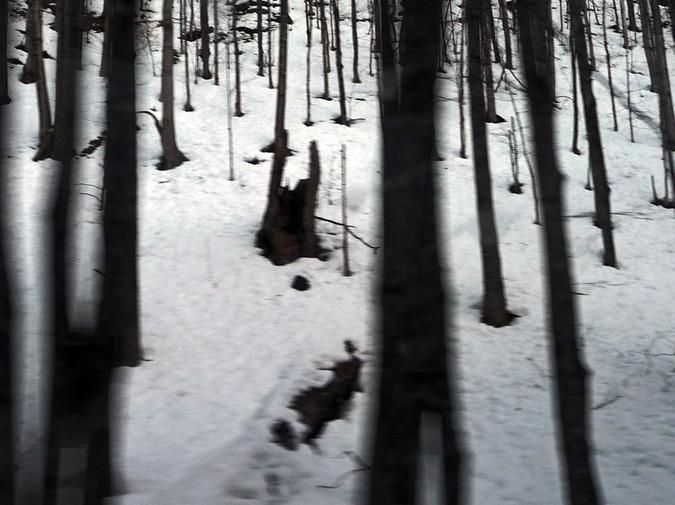 Ohio lay between them, Ohio parted them apart. As he had gone his way, the streets of Ohio had been afire, and you could, as they say, fry an egg in that heat, in that atmosphere. They had tried to live  together in Ohio, in a place in between their own small towns, but now it was impossible, this dream, because he had been drafted into the army to fight in a faraway place. Some tatters of her letters made it through to him over there where the war was, delivered by poor homeless messengers who desperately cold in those wartime nights tore pieces of that letter for their fire. In those letters she said she still remembered him, and she promised she wanted to meet him again, for that scene of him leaving on that straight-line highway through Ohio was still on her mind...His bus she saw for so many miles as it left, until she shouted out his name when the bus was about to turn around a bend, and of course the bus went along anyway, and an overwhelming pride at his bravery in going to war swelled within her, all of a sudden, when he was out of sight...this experience struck her, she said, and she continued to say: “When off in the distance was a sun burning the sky and the tarmac as it set, then I broke from the tarmac a small hot piece of tarmac-rock whereupon the tires of the bus you were on had tread, and I placed it inside my cherished locket, even though I knew one day Father would find it.”

These were heated times to live in. Oil was drying up and militant men were in-charge of OPEC and other oil-cartels now. Nuclear arsenals were expanding even as leaders promised decline in numbers. Whales were dying and it took too long a time for anyone bar some to care. They said colored folks were so passionately “organized” that if you tossed a quarter into any dark alley at night, you would hear a deep-voiced “thanks” from a colored person singing with guitar softly and angrily a revolutionary song. Universities were empty, factories were empty, streets were full of agitating people, and one or two angry individuals were seen digging at the ancient war-trenches, ready to start another Great War. And then one morning: “Haven't you heard,” the papers had said, “a man got shot in Ohio.” It was that shooting, everybody knew, that lit Ohio afire. War came upon them, and when that dead man from Ohio had barely been buried, many more men had already died in the war his death had supposedly caused.

Father had taken to drinking heavily, sick of the times and mad at them all. “So easy,” he used to say drunk on whiskey which he called “fuel for his inner fire,” “that if a man's dead the war-mongers put him as the cause of war, just because a dead man cannot read the papers and judge, just because for a dead man's body lying beneath the ground the war is not a burden, but then you have those damn land mines that are nowadays strewn across our graveyards, so even dead men aren't allowed to rest in peace no more...” But as his drinking got worse and the more “writerly” his thoughts became, the more peculiar his habits: he began to suspect that his daughter had been trying to get closer to the soldier she loved, so one drunken night he lit a candle on the dining room table and forced his daughter's hand to hover over the candle's flame, very, very close to it. He asked her about the boy, not rushing with his questions and silences even as she was burning the palm of her hand. He found her cherished locket with the small tarmac-rock, “ol' tarmac” as she had named it, and asked her what it meant, this “ol' tarmac,” and how it was that still Ohio's fires heated it so. She refused to answer his questions, and the candle eventually went out, throwing the two of them apart in a darkness where the distance between them seemed great. Later at night she looked by the fires of Ohio at the burn on her palm Father had caused: it was a burn round, black, and moist from the sweat and blood, and it looked like a drop of oil, glistening in the fires. As she looked at it some more, it reminded her of her soldier's face, which too must have been sweating and bleeding in the moil of war, poor soul. She thought that her soldier must have become from that round-faced boy now a long-faced man, and although that burned-in childhood face of his became her companion that soothed her to sleep with memories of yesterday, in the mornings she asked when she would get to see his face as it was now.

And then one day an army entered her small town on a bus. At the head of the army was her soldier, her man. People began to fear that this was an invasion of their small town, but the army told them that they had come not to invade, but as part of a celebratory procession to declare that the war was over and victory was theirs. The tarmac beneath her feet was not as hot as before, Ohio, although ruined behind its “victory face,” was no longer afire, and there seemed to be a feeling of silence within one when looking at Ohio from here, for now a silent fire lit Ohio within its childrens' bedside-lamps and its parks' streetlamps, the skies over it were quiet, its waters undisturbed by far off ships, for the first time in a long time Ohio was this way, and here, on her very street by Ohio, was dance and parade and barbeque and kisses for all. She too wanted to kiss her man, and so she cried aloud his name many times so that he could hear her, but her voice was too soft and he did not hear her in the noise. He too was searching the crowd for her, but he could not find her in there. She decided to catch him as he was boarding his bus to go back to his town, but she couldn't traverse the celebratory crowd even there, and the bus left, while she ran after the bus until she was breathless. She could see the bus again in that straight-line Ohio highway, and she shouted his name, again and again, and waved her hand with that burn so that if he happened to turn around he would at least see that burn-mark of his face on her palm, the burn-mark itself a remaining product of war, in its own way, suggesting that not everything that had been wounded and broken had indeed been fixed, that there remained the enormous task now to heal from the war the burns that refused to be patched up. After all, these were heated times to live in...The flames had been doused, but the stacks were still smoking, and new tarmac was being laid, but ol' tarmac was still breaking...She hoped that he would see the burn-mark on her palm and turn around to come back and heal it. She hoped he would understand that she herself could not heal that mark as long as it resembled his childhood face. But did he see her? Would he turn around for her, after that great war of departures that he had fought, or would he let departures be...? She had no way of knowing if indeed he did turn around to look out the bus window, and of course he did not hear her as the bus rounded a bend out of sight, and so she tearfully kept waving her hand at him, goodbye, goodbye, even after the bus had disappeared around the bend and she waved at that empty and ruined Ohio landscape and at that empty straight-line Ohio highway, as if now waving at the world, goodbye, goodbye...

Saugat Bhattarai lives in Kathmandu, Nepal. In 2008, he had gone to the United States for a four-year education. He is an aspiring writer writing a short story collection.