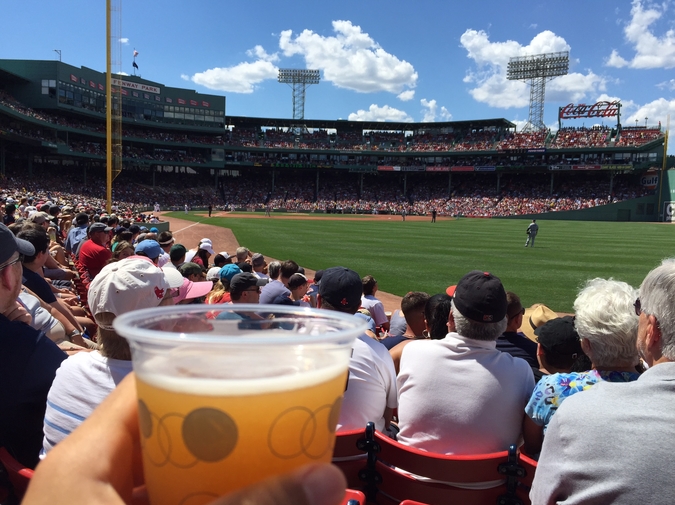 Begin with Angels in the Outfield, a mid-nineties movie remake in which a young Joseph Gordon-Levitt prays that his local baseball team, the California Angels, will win the pennant, and literal angels descend from the heavens to make it so. Cultivate an adoration for this campy Christian film that scored 33% on Rotten Tomatoes. Pop that tape into the VCR every chance you get. Linger on the scene where the benevolent winged beings, invisible to all but Gordon-Levitt, gently heft a struggling outfielder toward a plummeting pop-fly, the ball sinking into his glove like a dove into its nest. Linger on the endearing faith of Gordon-Levitt’s adorable sidekick J.P (Milton Davis, Jr.), who when confronted by the cynicism of adults only smiles mischievously and utters his iconic tagline: “Hey, it could happen!”

Learn the lingo from your mother. ERA’s and RBI’s. Ground rule double. In-field fly. Walk. Strike. Passed ball. Wild pitch. Spend what seems like an entire summer tossing a squishy toy baseball back and forth in the family room as Mom quizzes you on the names of the thirty MLB teams. Get the California teams confused over and over.

Discover that a favorite baseball team is not chosen as much as bestowed. Yours will be the Cardinals, courtesy of your mother, who was born and raised in St. Louis. Your rival teams are the Cincinnati Reds and the Chicago Cubs. You will also dislike the Yankees, because of how they dominate the airwaves in your native New York State.

The Cardinals are a good team to have bestowed upon you. They are an old team, with an extensive fan base. They have won eleven World Series, second only to the Yankees. Perhaps most crucially to you as a child, the cardinal has the sweetest song of all the birds in your mother’s backyard: long, liquid notes that carry beautifully through the stillness of a summer afternoon.

In 2015, upon moving to Indiana—which has been making headlines for the homophobic Religious Freedom Restoration Act recently signed into law by Governor Mike Pence—take absurd comfort in the fact that its state bird is the cardinal. Like this is your lucky omen. A bulwark against any bad things to come.

Consider the math: a 40-man roster per 30 teams equals 1,200 MLB contracted players. A 2018 Gallup report found that an estimated 3.9% of American men self-identify as gay, bisexual, or transgender.[1] In the words of economics professor Justin Wolfers, writing for the New York Times in 2015, “the odds that none of these [players] are gay is one in two sextillion. A sextillion comes after a trillion, quadrillion and quintillion; it is a thousand billion billion.”

Yet there has never, in the 150 years since its founding, been an openly gay, active player in the Major Leagues. We’ve been in the vicinity with Billy Bean, who came out four years after retiring, and with Rookie David Denson, who made history in 2015 by being the first openly gay Minor Leaguer.[2]

The closest we’ve come is Glenn Burke, an outfielder for the L.A Dodgers and the Oakland A’s in the 70’s. Burke stopped short of publicly confirming his sexuality, but his teammates knew him for who he was. General Manager Al Companis even offered to pay him $75,000 to quash the rumors by getting married, to which Burke replied, “I guess you mean to a woman?”[3]

Ask your mother to nominate a player who she thinks is “The Cardinal Gay.” After some consideration, she names the strapping young outfielder who was once photographed boarding the airplane in a velvet suit. You will pick, arbitrarily, the player with the biggest butt.

Wish that a Major Leaguer would come out of the closet, but don’t be surprised when he doesn’t. Haven’t you shrouded your girlfriend in careful platonic euphemisms in uncertain company? Haven’t you avoided holding hands on certain streets?

And that’s without facing the particularly virulent stigma against gay people in professional sport. According to Out on the Fields—a survey of almost 10,000 people hailed as “the first international study on homophobia in sport”—only 1% of participants considered LGB people to be “completely accepted” in sporting culture. More than half of participants believed homophobia to be more common in team sporting environments than in general society.[4]

Feel guilty, from time-to-time. Like you’re shirking your lesbian duties by favoring this masculine spectacle over women’s soccer or softball. You would like to like softball, but you’ve never been able to tolerate the implied insult of a baseball-for-girls, with its smaller field, underhand pitch, and absurd cantaloupe of a ball.

In fact women have been involved in professional baseball since its inception, resisting sexist taboo and the persistent lack of infrastructural support to play the sport that they love. In 1931, seventeen-year-old Jackie Mitchell took the mound against the New York Yankees, striking out superstars Babe Ruth and Lou Gehrig. The passion with which certain historians have claimed that the strikeouts were an orchestrated publicity stunt only underscores the ongoing reluctance to accept that women possess the physical ability to compete at the most elite levels of the sport.[5] Today, the USA Women’s National Team continues to fight for public recognition, despite snagging gold in the Women’s Baseball World Cup in ’04 and ’06.[6]

It is telling that the most well-known representation of women in baseball comes not from ESPN but from Hollywood: Penny Marshall’s 1992 film A League of Their Own, starring Geena Davis and Tom Hanks, tells a fictionalized account of the All-American Girls Professional Baseball League that ran from 1943 – 1954.

In your high school yearbook, where parents are given the opportunity to submit cheesy inspirational quotes, your mother’s selection will stand out amid the many iterations of “We love you!” and “Reach for the stars!” She has chosen to channel Tom Hanks’ now-famous line from A League of Their Own: “Always remember, Tess: There’s no crying in baseball.”

Your friends laugh and puzzle over the oddity of this phrase, with its tone of near admonishment, but you’ll recognize the blend of humor, toughness, and affection that has always grounded the relationship with your mom.

To have an openly gay player of any gender in the MLB would be unprecedented, but the unprecedented feels more and more possible these days. As you finish this essay, COVID-19 has ground the 2020 baseball season to a halt. Four weeks in to their negotiation, owners have yet to reach an agreement with the players’ union over when games will resume, and how. Imagine the new world that awaits us: The crack of a bat blasting through an empty stadium. Baseballs dunked in disinfectant. Managers wearing masks. No more spitting sunflower seeds. No more common water containers. No more bat boys or bat girls. No more fist-bumps or high-fives.

There is no easy way to extricate oneself from the quagmire of loving-that-which-seeks-to-render-you-invisible, but in sentimental moments, you will catch yourself daydreaming of a different kind of future for Major League Baseball, one that has nothing to do with masks or social distancing. In this utopic fantasy, it’s October, your favorite month, the New York air tinged with a perfect hint of autumnal frost. A television screen beams game seven of the World Series into the comfort of your living room. Even your sports-scorning wife has joined you to catch the final innings: the game is that close, that good.

When the batter steps up the plate—a shortstop, let’s say, with a face so young and shining it makes you feel decrepit—your wife says, “Is he one of the gay ones?” And your honest answer will have to be that you don’t know, you can’t remember, because in this fantasy, there are so many gay players that we forget about them: queer camouflage has transformed from a covert act of self-preservation to a natural consequence of our shifting norms. One came out, and then another, and another, and soon we lost count. With whom the young shortstop shares his bed between games is the last thing on your mind as the pitcher comes set, steps, and throws, and you join the millions of Americans leaning forward in their seats, hushed into thrilled reverence, waiting for what comes next.

We could get there. It could happen.

[1] People consistently overestimate the size of the gay population. A 2019 Gallup report found U.S adults believed nearly one in four Americans was lesbian or gay.

[2] Bean was hired as MLB’s first ever “Ambassador for Inclusion” in 2014 and presently serves as the Vice President of Social Responsibility and Inclusion.

[4] Of the six countries surveyed, the U.S. consistently showed the worst homophobia and LGB discrimination in sporting culture.

[6] They’ve since struggled to overcome Japan, which has won gold six consecutive times. Unlike the Americans, the Japanese enjoy the advantage of a consistent and formalized pathway from youth baseball to the Japanese Women’s Baseball League (JWBL), the world’s only active organization for professional women’s baseball.

Tessa Yang’s fiction has appeared in The Cincinnati Review, Foglifter, Cream City Review, Joyland, and elsewhere. She lives in upstate New York where she is an assistant professor of English at Hartwick College. She is currently at work on a novel. Find more of her work online at www.tessayang.com, or follow her on Twitter: @ThePtessadactyl.