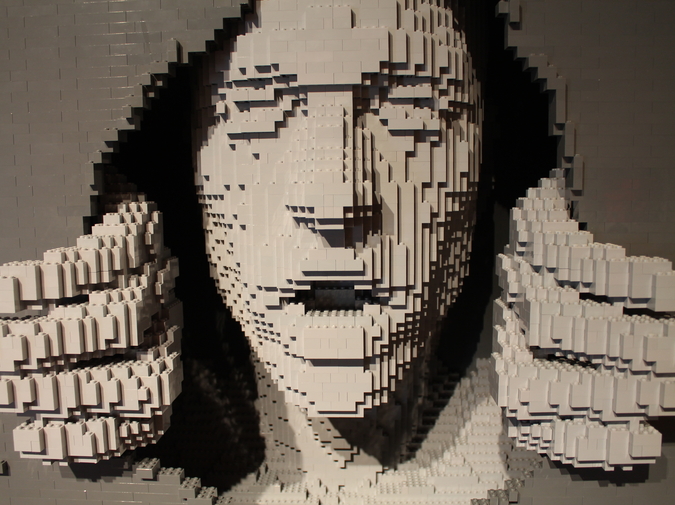 I fell in love with a woman who had a face like she meditated. She didn’t meditate--I knew she didn’t meditate and when I asked her if anyone had ever told her that she looked like she meditated she shook her head.  She had deep-set eyes and an absence of wrinkles aside from the crow’s feet that were visible when she laughed, the way one’s face comes to look after all of that conscious relaxing. At a party when she told a stranger, “I’m forty,” they said, “You look like you’re ten.” We all laughed because it was true. She tells me she is an eight year old kid on the inside. She is a wise eight year old, with gray hairs you can only see if she lets you close enough.

“I can’t meditate,” she told me in the dank sports bar over nachos she ordered that I was I too nervous to touch. She picked at them. “No one can meditate,” I said,  “It’s a practice.”

“I’m like Jennifer Westfeldt in the movie Kissing Jessica Stein,” she said. “If I can hear my heartbeat, it’s over.”

Before I told her all this--that I was in love with her and that she looked like she meditated, she’d bought me a tequila shot. It was a little past noon. She ordered her coffee black. I loved the look on her face when she refused cream to her coffee. She squinted her eyes, gave a half-smile and a shake of her head. When I enjoy watching people do the mundane - sip their water or shut a door - that’s when I know I love them.

I’ve always been profoundly intimate with my girl friends. The first girl I loved deeply lived up the street from me in upstate New York. Sara was my first everything, my first human experience. We went to preschool (“pee-school,” we called it) together. We carpooled to school together through ninth grade, until her parents sent her to a private school (out of state or on the other side of town?). In the beginning, you’re friends with someone because they live up the street from you. This is why life gets so complicated later, when you have the freedom to actually fall in love with anyone--regardless of how close their street is to yours. We played “house” in a super sexy way. We’d shut the door to her bedroom or mine and straddle and hump each other. We knew what we were doing was only for closed doors, because once in my room, when my father opened the door without knocking, we jumped off of each other and yelled, “WE’RE TAKING A NAP!”  Sara and I loved the radio: especially Lou Bega and Michelle Branch. At her new school in Massachusetts, Sara met a girl named Lily, also blonde with the same birthday as me, and they became best friends. I was brokenhearted. Sara attempted to make me love Lily too, but best friends rarely come in threes and eventually we both let go. I still get tense when I see photos of them together on Facebook. Sara is the one person (aside from my parents) who has wished me a happy birthday every single year.

My second best friend was Julie. We met in the 4th grade. She is best remembered for the time she jerked off her dog Marlo in front of everyone with a plastic baggie over her hand. Later she denied denied denied. Julie and I bonded by being cruel. We wrote notes to each other saying things like: Sabrina’s shirt is really ugly...let’s tell her it’s a really nice shirt and that she should wear it all the time. Julie lived in a trailer (a detail I found glamorous) and I slept there on both Friday and Saturday nights.  I went to church with her family on Sundays, which I loved, since my family didn’t go to church. We ate cheese puffs and watched I Love Lucy at night, which I loved, since my family didn't buy cheese balls or have cable.  Julie and I thought pot was just mixed herbs, so we rolled joints with oregano and smoked them, thinking we were getting high.

We were all dressing the same at thirteen. Individuality was way too terrifying. We wanted to look like tomboys. We wore baggy Billabong jeans, navy blue polo shirts from The Gap or Abercrombie, hemp necklaces from Pacific Sunwear, and our hair in buns. Sneakers: Vans, Airwalks, Skechers. We loved having dramatic conflicts and crying and bringing one another to the guidance counselor’s office.

At fourteen, we were obsessed with the movie Gia, which starred Angelina Jolie. We liked her mouth, her tits, and especially her skin. At sleepovers we’d cut out photos of Angelina and make collages.  My friend Kelly and I had fair complexions and sensitive skin and the others were Jewish with luminous olive skin. “Why do Jewish girls get to look so pretty in the morning?” we would wonder out loud. Kelly and I hated our skin. Too white. There’s a photograph of Kelly and I curled up together in bed, and I’m sporting a black eye. A boy had thrown a snowball at me and hit me in the face.

Kelly and I had a precarious relationship. We were like the girls in that British movie with Michelle Williams, Me Without You.  “Chloe’s deep smart and I’m street smart! We make the perfect couple,” Kelly would say.  Our last names had the same first three letters, so we physically grew up shoulder-to-shoulder. We were next to each other in everything: lockers, desks, the line for the bus. Teachers were on to us, and would place a goody-two-shoes boy between us. We'd stroke our legs and feet against the boy’s legs, attempting to give him a boner in front of everyone.  Sometimes we’d kiss with tongue because the older boys would pay us. We wanted the money so we could go tanning. We went into churches and threw water on one another’s head, baptizing each other, right after we stole lipstick from Rite Aid. We loved reading: To Kill A MockingBird, The Diary of Anne Frank, Ordinary People. Outside of school, we read books like Speak and A Child Called It and The Torn Skirt. Kelly and I grew tits before everyone else. Same size but different shapes--hers round and mine pointy.  Kelly’s brothers had huge jars of homegrown weed and we’d steal handfuls and smoke it but also give it away. Kelly has always been one of the most generous people in my life--giving me clothes and drugs and phone calls when everyone else is gone.

Junior year of high school we were dressing the same again, this time in low-cut shirts and tight jeans. Our hair was getting blonder, our breasts getting bigger, ours lipsticks getting darker and our skin getting tanner. Our grades were getting worse. The school was freezing and you could see our hard nipples through our shirts. We started sweating and had wet circles underneath our armpits.

There are dozens more women I have loved, still love.  My female friendships: Less than ten years ago we were taking acid and kissing in twin beds and what do we end up with? Drug habits or babies. Fuck. I loved men too, and as I entered adulthood, I’d sometimes bring them home to see where I grew up, and we’d sleep in my twin bed by the window with the pink comforter. The one I’d slept in dozens of times with dozens of girls, the girls that made me who I am. Who am I without them?

The man I loved loads and was most intimate with wasn’t a woman but when I compare him to other men I realize he sure acted like one. My girl friends would meet him and text me later saying: I like him, but wow, he was so effeminate.  He was overly enthusiastic. He made up songs about caterpillars. He sang along to Beauty & the Beast in the car. He cried passionately and often. His emotions were too big for his body so he drank and snorted lines to deal with his feelings. He was exhaustive. No one liked being around us at the same time. “You’re both manic-like,” my mom always said, “You’re grandiose.” “Why are you so sensitive!” he yelled to me from the bathroom once. “Because I am!” I yelled. “Why are you?” I looked into his shining eyes and we laughed. “Because I am,” he said. Last time I talked to him, I told him how I fell in love with a woman, told him I was preferring women to men these days. “Of course,” he said. “Men are like hairy rocks, but women! Women are like soft magical fairies!”

Being touched by this woman that looked like she meditated made me feel like I had never been touched. “Why does that feel so good?” I asked her. “Because my hands listen,” she said. “You touch my back better than my mom has ever touched my back,” I told her. I guess I figured that if any woman would touch my back tenderly, it would be my mom, but I was wrong. This woman and I became so intertwined in our minds and bodies that you could safely call us “obsessed.” Our intimacy felt so deep, and sometimes we wouldn’t be able to quit emailing or kissing. One night she had an idea: We need a safe word, she said. The safe word was to be used when one of us felt things were getting unhealthily intimate. I didn’t use the safe word for months, even though I desperately needed to. A safe word possibly would have saved a lot of my friendships. Last night I thought about using it, but I forgot what it was.

Chloe Caldwell is the author of "Legs Get Led Astray" (Future Tense Books 2012). Her nonfiction has appeared in Salon.com, The Rumpus, The Sun, and Men's Health. She lives in Hudson, New York. www.chloecaldwell.com.