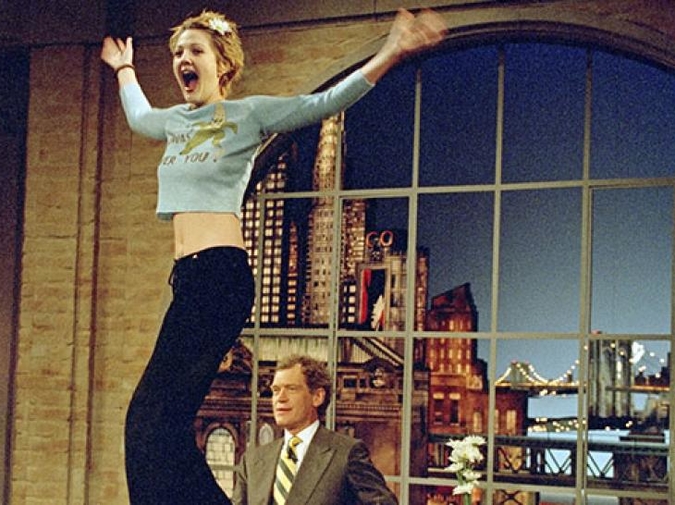 When Chevy Chase made his first appearance on The Tonight Show in 1977 he told Johnny, “… and it was long after the 60s thing, with the polarization, the Nixon/Watergate and feminism and racism, all of those issues were kind of over and we pretty much all agreed that we were all depressed, in every sense.”

Then he demonstrated for the audience how to do a proper pratfall with a chair and a glass of water.

Letterman wore khakis and the camera angled up his crotch. I watched every night or set my VCR to record on the rare occasion I left my apartment. On his new show on CBS Letterman wore normal pants and sat behind a taller desk and I was instantly less interested. (I was less agoraphobic by then, also.)

The first movie I remember sobbing in was The Elephant Man. Which doesn’t really prove this point.

When I think of myself twenty years from now I think of the movie Frances. I was about the age my daughter is when my mother and I watched Frances for the first time on a TV in our living room. It was like reading The Bell Jar. Knowing what can happen to you as a woman if you become dissatisfied or if you express dissatisfaction.

I have a similar list of movies for my daughter to watch.

Last month we watched Truth or Dare on a desktop computer in my bedroom.

I am considering making her watch a clip of Madonna cursing on Letterman also. In 1994, people counted how many times a woman used a word of profanity on TV. In Madonna’s case: fourteen.

Recently, I had begun to face the fact that nearly everyone I came into contact with was considerably more ambitious than I was.

My ambitions seemed to consist of watching talk shows from prior decades alone in my office to see how history repeats itself and to feel self-congratulatory about these observations when they came.

Two nights earlier I had had a dream I was in a car with the actor Sean Penn. We weren’t even in a boat in New Orleans or Haiti. It made no sense.

I only really liked the Sean Penn that was married to Madonna, anyway; the Sean Penn who punched photographers when they tried to take pictures of his more famous wife. I’d never experienced this level of devotion.

I Am Sam Shepard Now

After Frances I worried I would go crazy too. Instead I married a man who did. I realized seven years later it’s impossible to stay married to a person once they’ve gone crazy. After that, I stopped blaming Sam Shepard for everything.

Then there was Drew Barrymore, her tightly cropped hair and scrunched, pixie face. This was the early nineties. I had different obsessions then. There was the story of how she met the Hole guitarist: barfing up macaroni and cheese on a sidewalk. Now she was standing on Letterman’s desk in a blue sweater; the words “I’m Bananas For You!” printed across the chest. With no one to be bananas for, I was envious. I had once cared a great deal about a man who once cared a great deal about Crispin Glover. He bought tickets to live shows. Such was the extent of his caring. My caring was less obvious. I watched a lot of TV and thought extensively about things like camera angles.

(I never believed Letterman was speaking directly to me, but I loved him anyway, as though I did.)

“Well, that’s nothing new, is it?” Johnny said. And Burt said, “Feels like high school.”

The stars seemed more real then; Burt had lines all over his forehead and he wasn’t even forty yet. Robert Blake wore his shirt inside out and referred to his hit show Baretta as “Barfetta.” He told Johnny most of the time people bored him because they were much more inhibited than animals or rocks. He said, “People will tend to bore you because they think there’s an advantage in acting alike ... So you gotta leave them alone and move on to other things that are kind of interesting. You know, a box, wood. Wood is very interesting stuff.”

Later of course he murdered his wife. Or was he, also, acquitted?

Johnny Carson died alone in his house, calling 911, same as Garry Shandling, who played a Johnny Carson like character for many years on TV. Maybe I care about Johnny Carson in the way I was supposed to care about my father. I didn’t cry when my father died, but I cried when Bette Midler sang, “You Are the Wind Beneath My Wings” to Johnny on his final show, on May 22, 1992.

I didn’t watch David Letterman’s final show, though I could still visualize Bill Murray singing “Let’s Get Physical” in a headband and shorts on the very first episode of Late Night with David Letterman. I could still visualize Dave calling Meg, who worked in an office in a neighboring building, when he was on NBC. I’ve often wondered what happened to Meg, how her life was different because David Letterman spied her though a window and called her whenever there was time to fill on the show. I had very few family members to wonder about. Instead I wondered about people I watched on television. I wrote letters to them also, dreamed about them at night.