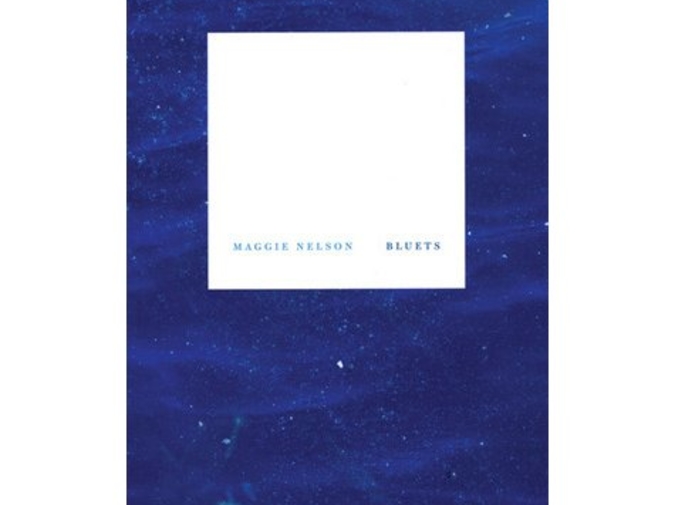 I finally tore Bluets in half @ 12:50 a.m.
I had had enough of it, of its blueness…
I had begun to loathe its preciousness, its precision
What it represents -
Its fans, the copycats
What it had made of women, female writers;
The academia, the polishedness, the politeness.
I missed the messy.
I loathed it for being a finished book,
Laid out and finalized in this form now in hand,
All its desisions made for it
I couldn’t make one more desision
(I had forgotten momentarily how to spell “decision.”)
I couldn’t materialize an editor
(all editorial decisions had to be made by me!)
it was a blessing and a curse
(can you tell?!)

I had read earlier in the summer an interview with Grimes
She made being independent a record label or independent a producer
(I couldn’t remember the precise ways in which Grimes was independent,
Only that it was important that she was.),
Sound enviable, fashionable, fun!

I found it to be a headache
I couldn’t stop thinking of Grimes’ ex boyfriend
The long car ride from Toronto to Montreal
In which he hadn’t said a word
His current girlfriend, my friend, driving,
Myself and C and Tanja, muted by his intense
Sulking, in the backseat.

Later we watched a Grimes’ video
In which he was featured.
His head was shaved then, too.

There is no one making editorial decisions here.
Oh, can you tell?

A Letter to My Daughter

for ‘the infamous Barbara Jo’

I was raised in the ‘70s by a young woman who marched for Equal Rights, read books by Gloria Steinem (and other female intellectuals of the time), worked two jobs, owned a gun, shot guns, chopped trees, chopped a live turkey, snorted cocaine, snorted crank, drank men under the table, beat men at pool, beat men at cards, came undone for men and overshadowed men, who was arrested for physically assaulting her boyfriend and who was physically assaulted by him, who both hugely influenced me by introducing me to women like Anais Nin and Virginia Woolf and Alice Walker and Frances Farmer and Stevie Nicks and Colette, and who at times neglected me, leaving me for men, leaving me to work, leaving me because she was a young, restless woman in pursuit (a young woman who took responsibility for her actions)

I read these poems – kept in a thick manila envelope somewhere in her bedroom – when she was out of the house, working or at a bar with friends or with a man

And though they were never published, I read them and they meant something to me –

That my mother was a thinking and an engaged woman, apologetic and defiant, loved and heartbroken, self-accused and self-mythologized -

The young woman taught me, above all, to question everything, like Buddha, “even me (perhaps, especially me!),” and to take responsibility for myself (just as Joan Didion urges in her essays)

I’m not sure what I have taught you, what you will learn from my poems or from my writing, if you will even read it (I’d be just fine if you didn’t!)

I think probably you have already taught me more than I will ever teach you, about not taking myself so seriously, about calling me on my shit, about a need to control my emotions, my adolescent heart

Remember that your grandmother and your great-grandmothers were each married and divorced three times, which speaks of a sort of defiant and independent spirit somewhere in our blood, or maybe of a bad luck in love, or of an intolerance of quiet unhappiness, a preference instead for out loud living, a penchant for hopefulness and self-reliance and resilience

I didn’t understand her then

I thought her cruel and unfeeling, unemotional, cold

I understand her worries for me now, her concerns (as you near the age I was then)

She wanted me to be financially independent from your father, which would ensure emotional independence as well

She was right; I had made my life harder

(It’s hard to be both a mother and financially, and emotionally, independent)

I did not view her working so many jobs as taking responsibility for herself, for her choices, until years later

I only thought she wanted to separate herself from me – and that work was one venue, and men another

But in a different way than I intended

With me questioning the mythology I years ago created for my mother, and, by extension, for myself

I made myself the victim way more than I ought to have (in the stories I told people firstly and in my writing secondly), way more than was accurate, because I thought that was interesting, I believed that was where any interest in me lay

I did not view myself as interesting otherwise

Or so I thought

I am only now beginning to take responsibility for myself, for my own cowardice on the page and in real life

But how much is this, too, a show of sorts, how much can even this “revelation” be trusted?

Is a writer ever to be believed?

Can a writer ever be trusted?

My only advice, dear daughter, do not become a writer

And this: never listen to your mother

I started doing yoga and at the end of every yoga session, as we were all lying with our eyes closed, blissed out in corpse pose, the woman who led the class would invariably say something like,

“With each exhale of your body, let go anything that is not of love, that is not of truth. Breath by breath. Let it all go. Ask spirit that today you let go of all judgment, that instead you open your heart and you open your mind and you allow yourself to embrace not only yourself but all beings everywhere, and that you ask from the bottom of your heart, for peace”

I began to think about that, about truly opening my heart and mind, about asking from the bottom of my heart for peace

For Muslims and not Christians or Mormons or Scientologists

For Democrats and not Republicans or Libertarians or Independents

For young women and not young men

I kept thinking of Dylan’s song, “A Pawn in the Game”

My husband and I went to a zoo in Ohio

A lot of towns in Ohio were like my hometown: the factories were closed and there were few job opportunities and heroin was commonplace

Most of the families at the zoo looked poor or working class, like their children would qualify as “my kids” for a Roger Waters’ sing-along on stage

There were a lot of Trump signs on the way to and from the zoo and I felt no emotion staring at them; I felt neither positive nor negative, merely aware

The conversation went like this, “I wouldn’t be friends with anyone who supports Trump” and “can you believe [so-and-so rock star] is a Republican?” and  “our neighbor has a big Trump sign in her yard and I know it’s basically a big ‘fuck you’”

Or how they would know if someone had voted for Trump

I wasn’t sure they understood that voting was private

I wouldn’t not be friends with someone because she did

I wondered when people I knew who had been into the punk scene and owned shirts promoting anarchy had become against demolishing the system; why they cared

I yearned for a true anarchist

“I don’t want the police here for any reason, got it?” my mother had said when a cop came around after my friends and I played ding-dong-ditch on an elderly neighbor when we were in the seventh grade

I never got the cops called on me again

I was more afraid of my mother than the police

Elizabeth Ellen published three books in 2017 (kinda): Person/a: a novel, Saul Stories, and Elizabeth Ellen (poems). She lives in the same city as the 'Cat Person' author and just recently found out her husband played soccer with said author most of last year.

more poems by Elizabeth Ellen (from Elizbeth Ellen): these are not poems, 6 poems, drake!