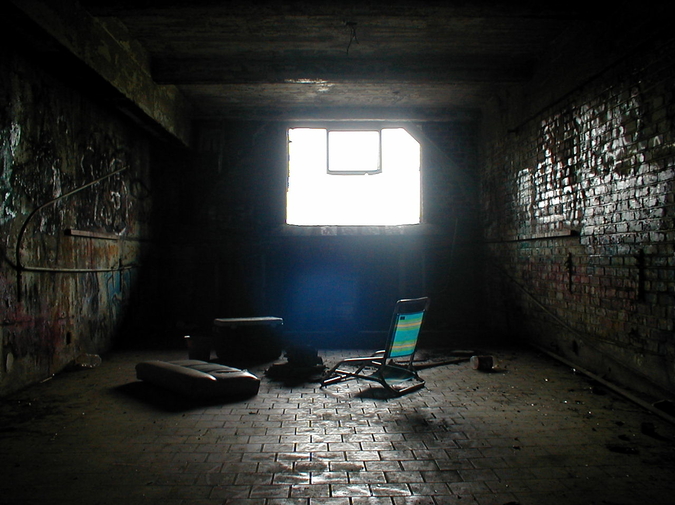 An absence surrounds the cabin; an absence haunts it.

My father sits inside, playing sad songs to the evening on his own father's little red ukulele. I listen. I dig holes in the yard. He leaves the windows open; he's trying to lure the brief dusk back out beneath the stars. I don't want to hear my heartbeat anymore, it sounds like work.

And eventually, the evening pinks and shies its head under the blanket of the horizon. I never recognize enough of any song to hum along, but there are ways to keep time with nothing more than a rusted shovel and a broken watch. When I come inside to get a beer I leave the lights off; put my finger on the refrigerator's door sensor in order to quiet the bulb.  Feel around in the dark for the cans. Objects feel familiar in a way that bodies could never.

Holding one hand is not even like holding the opposite hand of the same body. So we spend days waiting for night; nights: we wait for day.

It's possible to think that neither is ever coming. Here could be a no-place, an inbetween, where the cordwood is too wet to burn even though the sky's been clear for years. Then, the sun. Then, the moon. We buried my mother, his wife, one handful of dirt at a time. It took most of my life; only a splinter of his.

If we knew how to be careful with each other, with anyone at all, maybe I could stop trying to bury the sky. Maybe he'd play a little rock n' roll high school and dance around in the lamplight and laugh a big open mouthed goofy laugh loud enough to surprise anyone who heard it, warm enough to avoid startling them. Maybe the moon would hop out of the bushes and work its medicine.  These things, I know, will never happen. It's already written out; my own son is on his way, carrying a bag of oranges and his papers in his hands. He's coming to introduce himself to me.

I'll look up from my hole, afraid, and I won't know what to bury.  It's not that we were going nowhere. It's that we'd already arrived.

THE SNOW IS STARTING TO FALL & THE TREES ARE ALL FELLED

The moon scrubs the thin arms of the trees down to their skeletons. She brought her own sounds with her; all the soft ones, It amazed me that she could fit them into her pack. I brought a case of beer and a package of convenience store gummy bears. Her car kept locking itself as I tried to unload the things she told me to unload; the car was alarmed and it yelped each time I unlocked the doors. Leaves tesselated themselves into a deep mor; the mor covered miles. It was cold, and she asked me for my voice to keep her warm. She wrapped it around her shoulders and I thought that maybe the other tents were filled with wolves, and bears, and fuzzy bobkittens. I'd never know. I built a fire like a love and, like a love, the fire unbuilt itself by the morning.

MAYBE THEY'VE SEEN US AND WELCOME US ALL

My name is Jeremiah Robinsons and I worry.

Sometimes I kill my friends
in little words

to see how it will feel

to pin their loss in language. Not
that, no, not that at all: my

I grind blankets between maxillian teeth
and mandiblian tooths. To tell the truth

I've been told that I don't breathe

and I cry in my sleep. My name
is Jeremiah Robinsons and I often get confused.

are all a difficult sentence to parse.

But I'm certain
that I'm writing to you

from the opening of the world. From the everbefore

when the idea still proved more tangible than the thing.

This is from the most dangerous of places.
Each new thought, here, is a womb for a new

type of death. I worry

about my friends in order to ignore myself.

My name is Jeremiah Robinsons
and I want you to make meaning,

but not from what's here,

from what's in you. Because

if there was ever a time to worry

it was, and is

now, and was then, and may be

tomorrow.  It's time
to imagine that there's a reason
for other people to hurt you,

that isn't, simply, because

Jamison Crabtree is a Black Mountain Institute Ph.D. Fellow at the University of Nevada Las Vegas and he received his MFA from the University of Arizona. His work appears (or is forthcoming) in Thrush, Whiskey Island, Apt, The Offending Adam, and The Destroyer. He lives in Las Vegas where he looks after his seven cats.