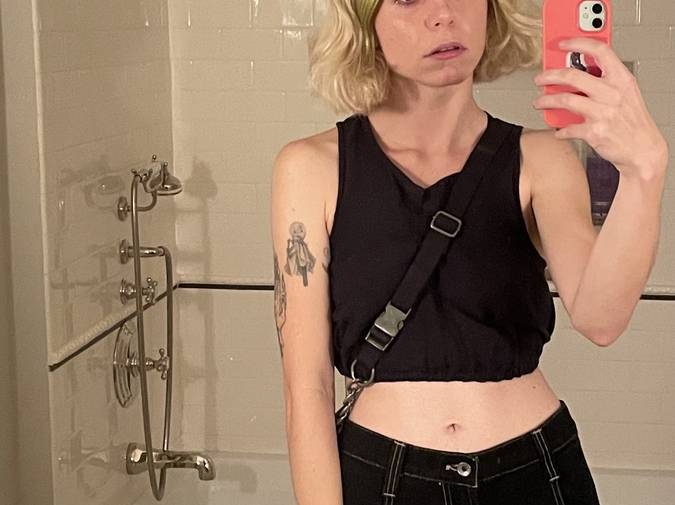 The first time Jordan and I had sex, he grabbed a magnum condom from the 50-count box on the ground beside us, slid it over his vaguely hard average-sized penis, and played the pilot episode of The Sopranos. Jordan was a mattress-on-the-floor guy, and he had stopped paying rent a few months back, but he had promised me lentils and toast if I “braved” the brisk 10-minute walk to his apartment. We had only met once, at the park between our neighborhoods, but I had mentioned being hungry over text.

Jordan lit a post-coital cigarette and contemplatively stared at the ceiling.

“We were engaged.” I let the weight of the statement wash over me, though he was only 22—five years my junior—and it was hard to take the prospect of him as a fiancé seriously. “She got on all these blogs,” he continued, “real evil shit, then started inviting neckbeards to our house down in Ditmas Park.”

I was unaware that I followed a Nazi on Instagram. Perhaps I didn’t. Perhaps Jordan didn’t know the difference between an edgelord and a Nazi. Perhaps I didn’t. Maybe there was no difference. Either way, I didn’t care about his former fiancée, and it occurred to me that this unsolicited confession could be some misguided attempt to make me jealous. Jordan ashed his cigarette onto the crotch flap of the boxers he was wearing. He suddenly seemed capable of anything.

“So have you talked to your landlord yet?” I asked, desperate to change the subject.

“No, but I’m banking on the eviction moratorium. I can’t be expected to barista when Little Skips is shut down.”

“Why don’t you apply for unemployment?”

“Because I’m not a fucking bottom feeder.”

In that moment, I decided I would never return to Jordan’s apartment. In fact, I would not even sleep there, but would instead “brave” the brisk walk home, even if it was 2am in Brownsville.

Jordan leaned over and cracked the window, for which I was grateful. The Sopranos droned on in the background. It was the part where Dr. Melfi analyzed Tony’s love of the ducks, the part where she inferred he wanted to protect his family.

“That was distracting,” I said.

I imagined myself on an elevator with gray carpeted walls, a square shaped mirror above my head. I gazed up at my reflection as gun shots and car chases blasted through the speakers. Each passing floor was just another floor down, and there was no hope of getting off.

I sprung from the mattress and excused myself. Every time I had sex with a new partner, I instantly contracted a UTI. The trick was to pee afterwards. Jordan’s toilet seat was lifted and shit stained the bowl. A neglected litter box rested under the sink, though I had not witnessed any other evidence of a cat. I lowered the lid and dressed it in toilet paper before planting my ass.

My urethra burned as I forced a jerky stream that stopped and started like an engine turning over in the dead of winter. As I relieved myself, I navigated to Jordan’s Instagram and surveyed our mutuals. There were only five women we both followed, and none of them seemed the least bit like Nazis. I wiped from front to back then gazed at my blonde hair and blue eyes in Jordan’s toothpaste-studded mirror. Maybe he was the real Nazi. Maybe he just wanted to see what I’d say.

When I returned to Jordan’s room, he had just lit another cigarette. I got on my knees in search of my crumpled panties, found them, then dressed.

“Where do you think you’re going?” Jordan said.

“Home.” I squeezed the side button on my iPhone to light the screen. “It’s getting late and I have to work in the morning.”

Jordan took a long drag from his cigarette and said “Suit yourself,” then gave me an unsettling salute as I turned to leave his room.

Shy Watson wrote Horror Vacui (House of Vlad). More work can be found in Southwest Review, Joyland, New York Tyrant, and elsewhere. She is an MFA candidate at University of Montana and an instructor at Catapult. Follow @formermissNJ on Twitter for updates.