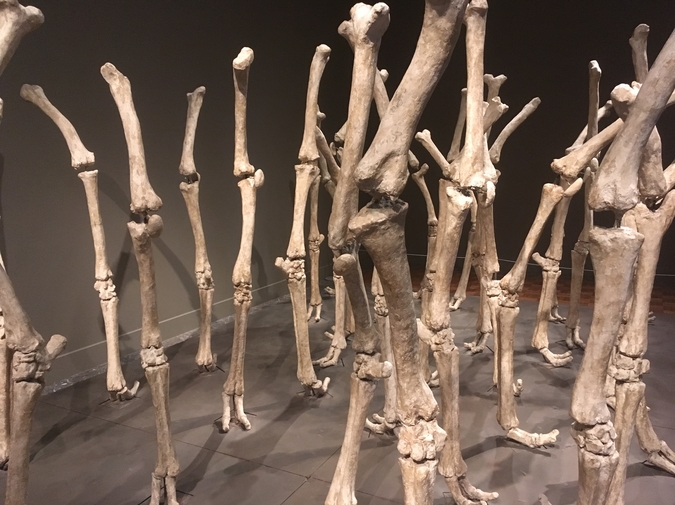 howls like he’s missing a muffler
yet we’re never quite sure if it was
him or the highway. Keep quiet

you whisper at me. I want to hear
the Dogman sing. And I want to
believe in a world, in a Michigan

where the Dogman’s low bellow
cuts like a last-ditch dagger through
the cloth of the night as it falls.

But this evening again the joke’s
on us. Sitting here on the porch
I notice you’ve developed a rapid pant

even before I turn to look and
behold the dangle of a lolling tongue
out of your open maw. And I mean

behold: all seven feet of you shines
a silver not so often seen in this
peninsula. In all the excitement

I scramble and get stuck by a splinter
in the pad of my paw. It hurts like
my mother always did each day dad

didn’t come back or maybe more
like the harsh nights when he did.
I cry out in pain. There it is again you say.

for once. He made it all the way across
the stage which stunned me senseless until

I saw him out of breath on the other side.
Of course the jig was up: if you’re going

to fly you have to act like nothing’s happened
after the fact—this is the first rule.

The second one you find out in the air
is something I’ve been prone to believe.

slaps the face of the lake palm open,
like give me all the far-off light

you’ve got but bring some red swell
and sting while you’re at it. Bring no rain.

A. Smith currently teaches writing at Truman State University in Kirksville, MO, where he lives with his wife, Jordan.