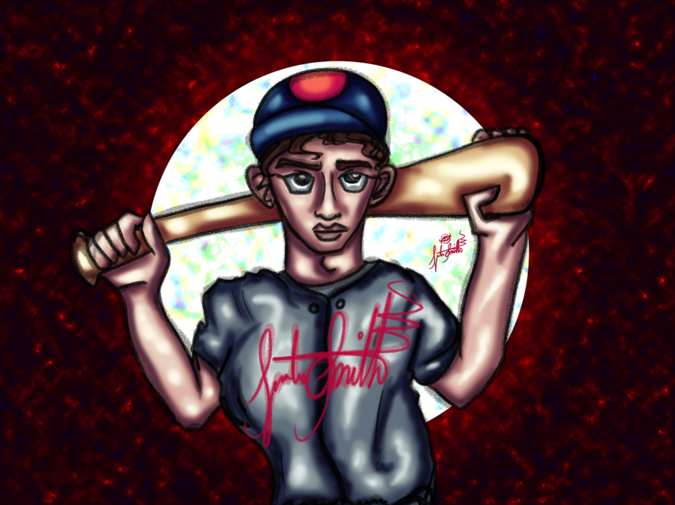 I used to go down to M street park
to watch Adam’s older brother practice hitting
I remember sitting far off in the empty bleachers
-he tossed the ball up in the
air and chased after it
he missed on the first try but swung with a strength
only an older brother can,
on the second try
he crushed it
the ball popped on contact
and instantly lifted into
the white sky
streaming up higher
than the oil drums in
the background
the one with the smiley face and the flag
painted on it
I shielded my eyes
and watched as it
carried up to the part of the sky you aren’t supposed to look at
and seldom do
up to where God is supposed to live
‘till it was swallowed up by the sun
so high God took notice
as I lost sight of it
and it disappeared into the sky.

Two instants later it re-entered the
atmosphere, past the park
crash landing across the street
with the justice of the world.

Watching the game
from the dug out
the coach paces distracted by nothing
his eyes only now and then on
the field
“He’s paying attention it just looks like
he’s not paying attention”
my father explains
and I wonder what it
would be like
to approach everything that
way
the missed phone class, the heartache, the confusion and worse
so in the zone you didn’t have to watch,
everything
on my arms in the night air
says this is our place
built on the feeling
the world is large and
in control and the rattling train
or the counter at Green and Freedman’s
as high as me makes sense
and you don’t outgrow this game
one day you’ll die and outgrow everything
until then it’s all here
the pocket of my jacket
black against the sky
the lights come up for the living and the dead
play ball

Born in Boston, Frank Possemato teaches English on the community college level. His writing has appeared in a variety of publications including 3 AM, Underground Voices, and as part of Harvey Frommer's Oral History Red Sox vs Yankees: The Great Rivalry.