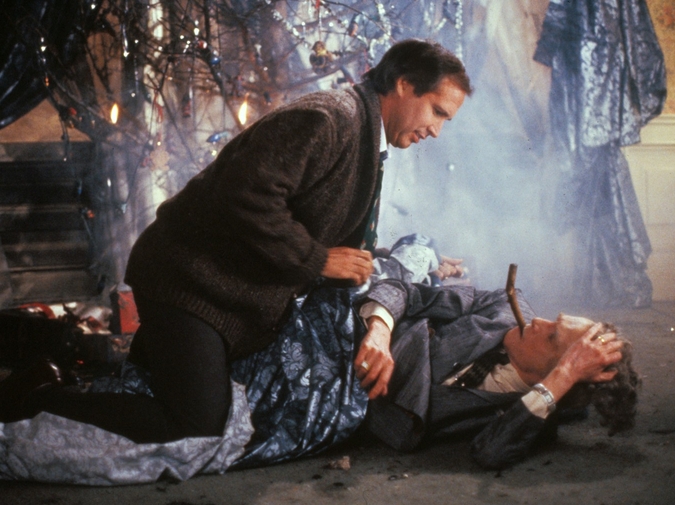 He claws at the frozen ground, vaguely aware of the intensifying blizzard. Snow replaces the dirt he shovels between his legs and turns red from his broken fingernails. He holds a mangled hand up and watches the blood spiral down his frostbitten fingers like candy canes.

Clark stands up, throws his arms around the tree and heaves upwards, backwards, like a Russian wrestler. His arms quake. Something in his knee pops, but the pain seems distant. He throws his head back, screams. Tears spring from his eyes and freeze against his cheek.

The tree budges—it's almost unnoticeable, but he feels the displacement of soil underneath his foot like a bout of sour digestion in his stomach. He drops to his knees again and claws away more dirt. A Christmas carol enters his head and he hums it flat. His family waits in the car, but they'll just have to keep waiting.

He's happy that he forgot the saw. This is more fun anyway.

Clark dons a hockey mask and fires up the chainsaw. Margot and Todd, Clark's rich neighbors, step out of their expensive car, and look upon Clark's uprooted tree with disgust. They shift their attention from the tree to him. There's no fear on their faces, as he had hoped. Instead, unmistakable looks of pity. His face contorts behind the mask, his eyes bulge. Clark tells Margot that he would like to sodomize her with the tree, and laughs at this joke as he chops the root off.

Through some bleak consolidation of plot—because for Clark, life has just become a series of predetermined actions and sight gags—his parents and in-laws arrive at his house at the same time. They fill it with the din of minutiae. He watches his son Rusty strategically avoid his mother-in-law. Clark wishes he could be like that, or at least be more assertive. He wishes that he could tell both sets of parents to get a hotel. But mostly, he wishes he could retreat within the sappy branches of his all-encompassing tree. He wants to back into it, pull the prickly arms around him, disappear, and watch how awful everyone’s Christmas would be without him.

Clark escapes the family by hanging Christmas lights. He stands atop the unsteady ladder and pounds staples into the trim of the roof, sometimes without aiming for the lights.

There are so many lights to hang. It feels insurmountable. His hand aches from squeezing the handle, but he's on a roll. He punches staples out so fast that he doesn't even feel the staple go through his shirt and arm, pinning him to the roof.

"Shit," he says, but says it with the dead resolve of a man who has stapled himself to a house one too many times before, and tries to yank himself free. His numbed rage strengthens his efforts, and the force carries him away from the roof. The sleeve of his shirt rips off—still stapled to the trim, hanging like flaccid genitalia—and he tips back, clutching the ladder, sailing, flying, until his back impacts against a tree. Pain climbs his spine like it's a string of lit firecrackers. He holds onto the top rung, 30 feet off the ground and waits for that moment when his hands give, when he falls to the snow-packed ground to break his neck. For a brief moment, it's the only thing he wants for Christmas.

Everything at the mall appears to waver. Clark's vision dances like he's looking over the top of a fire. A fever dream of products and people. Heat squeezes sweat out of his pores like a teenager picking through acne. He stumbles over to a lingerie display, braces himself against the glass.

An attractive woman with a low-cut shirt asks if she can show him something.

Clark fumbles with his language. Unintentional, witless sexual innuendo laces his words. He admits to smelling the panties. Pity crosses the woman's face—barely disguised with a commission-earning smile—but pity all the same.

"No shit," he says, to no one in particular.

Clark looks for a place to hide an armful of empty boxes he's wrapped to look like presents. These are gifts for himself: alibis to slink into obscurity.

He pulls the string to unleash the attic stairs, but fails to move fast enough. The stairs slide into his face, and the sound of his cartilage breaking is like a boot crunching through snow.

He locks himself in the attic and watches old home videos on a projector. When the film ends, he stares at the flickering white square for hours.

Eddie, Clark’s wife’s cousin’s husband, shows up to their house uninvited. He smells of shit and dog food.  Grease coats his skin, giving him a permanent sheen, and Clark regards this glossy finish like the lure of an angler fish or other predators. Eddie's family is a feral clan of half-breeds, and he openly admits to dropping them into wells for his own amusement. He is the only man who will rile Clark's own deteriorating moral compass because he does not fit onto the scale of "naughty" or "nice." Rather, he's a perversion of it, a wild card with the dangerous ability to mask a conniving brain with an air of buffoonery.

Clark pours eggnog into two frosted, moose-shaped cups while Eddie circumvents their living room in a yellowed thermal shirt and long johns that obscenely hug everything below his gut. Eddie accepts and drinks the nog with the approximation of class, but his thick-throated gulping makes Clark want to vomit.

Eddie's beast of a dog drinks from the Christmas tree water, and when Clark protests, Eddie leans in close and says "He's cute ain't he? Only problem is—" and the way he says "problem" tells Clark that this isn't a problem with the dog, but for anyone who isn't the dog—"he's got a little bit a Mississippi leg hound in 'im. If the mood catches him right, he'll grab your leg and just go to town." There is no happiness behind Eddie's smile "Word of warning though, if he does lay into ya, it's best to just let 'im finish." Eddie tips the moose back and chases the threat with three thick gulps.

Later that night, Clark hallucinates a pool in his backyard. The snow is gone. The cold is gone. He watches as his family splashes and waves and reaps the rewards of his soul-crushing efforts to give them an old-fashioned, family Christmas.

Eddie—Eddie, Eddie, oh Eddie—climbs onto the diving board, wearing his shit-stained underwear as a bathing suit. He readies himself for a cannonball, and Clark would give anything to not have to watch Eddie soil his new pool, his symbol of success, with an ass-first dive.

And, as if granted his wish, Eddie turns into the beautiful brunette from the mall!

Here she is, rising out of the pool without her red top.

Eddie's daughter walks into the kitchen to find Clark touching himself to the sight of snow falling outside.

Christmas Eve. The turkey's overcooked. The insides, dry, like an H.R. Giger painting. Clark swallows a jagged piece of meat that shreds his throat on the way down.

He excuses himself from the table to electrocute a cat.

He laughs. His dad tells him, he's "gone goofy." Everyone stands to leave. Clark becomes wild-eyed. No way, not now. Black dots cloud his peripheral; the sight his family becomes a pinprick that fades into the distance, like they're disintegrating. His own voice sounds faraway, faint under the sound of blood-vessels cracking in his eyes and a migraine blooming in his skull. This pain isn't unpleasant. The headache spreads across his face, gives him the feeling of warmth. It's the hap, hap, happiest Christmas since Bing Crosby tap-danced with Danny fucking Kaye.

Hours later, he realizes that—provoked by the ranting of Clark's delirium—Eddie has kidnapped Clark's boss, and that they've been torturing him for some time.

A SWAT team breaks through the door. Officers swing through the windows. The breaking glass is a song to Clark. They force him on the floor.

But they're too late. The air in the house has become thick with methane from Eddie's shit, the shit he dumped from his RV. Clark's deliverance from a world of shit. Seems appropriate.

Great uncle Lewis strikes a match to light his stogy. The flames lift him upward and he returns to the earth as ashes.

The fire rips his wife apart.

This is the Christmas Clark has been waiting for.

"I did it," he says before the fire embraces him.

Ryan Bradford edits BLACK CANDIES, a literary horror journal. His writing has appeared in Quarterly West, Paper Darts, Vice, Monkeybicycle and [PANK]. He lives in San Diego. Find him at ryancbradford.com or bug him on Twitter: @theryanbradford.