December 19, 2014 Outliers: Unusual Entries in the Filmography of Famous Directors

World Trade Center: An Outlier in the Filmmaking Career of Oliver Stone 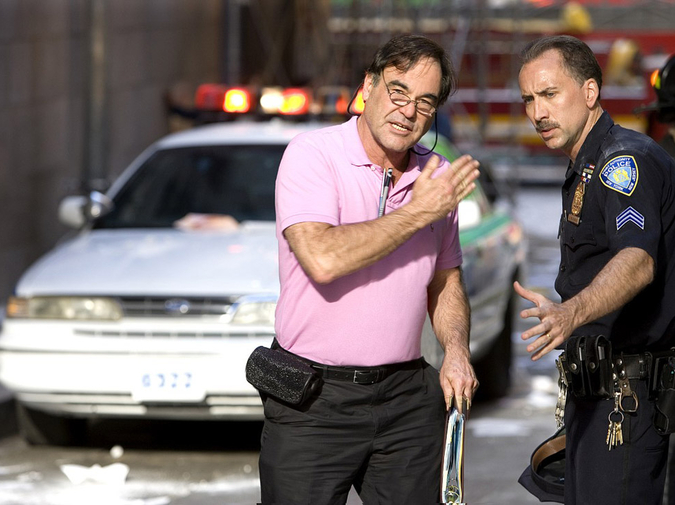 2006 saw the release of World Trade Center and United 93, the first two studio films to use the events of 9/11 as their primary focus. I recall their impending releases at my local movie theatre during my first year of college. A friend on the staff had told me that audiences who attended a screening of either film would receive a full refund if they felt upset by either movie, even if they sat through the entire screening. I knew this chain theatre took these precautions with the surprisingly touchy Pennsylvania town in which we lived, but I expected that sensitivity more for the uninformed Borat crowd who felt uncomfortable at the sight of Sacha Baron Cohen’s hairy scrotum. Surely the public should know enough to realize that a movie depicting the most tragic act of terrorism in our nation’s history, an event from just five years earlier, might upset them.

World Trade Center came out at a precarious time in Stone’s career. He’d spent the late 1980s and much of the 1990s churning out fiercely debated, button-pushing dramas. Politics has served as focal point of Oliver Stone’s films since his early days in film school. After dropping out of Yale, Stone enlisted in the United States Army where he fought in Vietnam. After his discharge, he attended NYU’s film program where his student project, Last Year in Viet Nam, focused on the difficulties veterans faced coming home from the war. Though he dabbled in horror films with early directorial efforts like Seizure and The Hand, his work as a screenwriter ultimately launched him to notoriety, thanks in large part to the savage content of his stories. 1978’s Midnight Express, his second produced screenplay, focused on the true story of Billy Hayes, an American student given a life sentence in Turkish prison for trying to smuggle four pounds of hashish into America. Hayes’ imprisonment and eventual escape served as a terrific backdrop for discussing international issues involving the burgeoning war on drugs. Stone went on to win an Oscar for his script.

After kicking around Hollywood for several years writing macho masterpieces like Scarface and Conan the Barbarian, Stone returned to directing in 1986, first with Salvador and then Platoon, the first Vietnam film directed by a veteran of the war. The movie became such an overwhelming success with audiences and critics, winning four Oscars, including Best Picture and Best Director for Stone. His work served as liberal counterprogramming to the rah-rah Reagan eighties.

However, once America entered the years of George W. Bush’s administration, Stone’s brand of abrasive politics fell out of vogue. In between the modest success of his 1999 drama Any Given Sunday and the financial/critical disaster of his 2004 drama Alexander, America suffered through the 9/11 terrorist attacks and went to war in Iraq and Afghanistan. While documentaries like Fahrenheit 9/11, No End in Sight, and Taxi to the Dark Side tackled this heated political climate head-on, major studios would not gamble on potentially polarizing films about terrorism and America’s involvement in the Middle East. Many of the releases from those years following 9/11—like In the Valley of Elah or Stop-Loss—incited apathy rather than outrage from the small audiences who saw them. Others—like Grace Is Gone, Home of the Brave, Redacted, and The Lucky Ones—were barely released.

World Trade Center tells the true story of two Port Authority cops (played by Nicolas Cage and Michael Peña) who survived the collapse of the towers after first responders saved them from the rubble many hours later. While the film occasionally cuts to the officers’ wives waiting in fear both of receiving and of not receiving word about their husbands, most of the film buries us beneath the remains of the buildings with our heroes. Stone’s greatest assets as a dramatist are on display here, filming in the cramped confines of twisted metal and concrete slabs, the air thick with debris. The officers barely know one another, but they persevere to keep hope alive for each other, from discussing topics of family to quoting G.I. Jane lines about pain. Given his status as a combat veteran, the viewer gets the sense that Stone has drawn upon his experiences with wounded comrades in the midst of attacks.

One weekend, when I was only eleven and my parents were spending the day at a cousin’s wedding, my grandfather called me into our living room to announce that he, my grandmother, and I would spend our afternoon watching his three and a half hour director’s cut of JFK. I was only eleven, but my parents allowed me to watch most movies since they knew how much film drove my imagination, and my other relatives acted the same.

I could tell that the movie had significance just from the packaging. I’d never seen a movie so long in its running time that it took two cassette tapes to tell the whole story. Even the director, Oliver Stone, had a message written on the back of the box, informing the reader that this edition was his definitive cut. I knew Stone by reputation, having seen his movies advertised on prime-time television each year when he released a new film. His work was muscular and controversial, bristling with objectionable content that even newscasters discussed. Plus, both the guys from Grumpy Old Men appeared in JFK, and I knew they must cost a lot of money to cast.

I sat on the living room carpet beguiled by the film, not only because I needed a compendium just to keep up with the varying theories, and characters, but also because I’d never seen a movie at that point in my life that captured the sensation of paranoia and uncertainty. Stone’s editors assembled a dizzying array of footage shot on different stock (along with archival material) to transport the audience back in time to relive the immediate aftermath of the assassination. Even then, I knew that the movie’s magic came not from trying to find answers to who killed Kennedy, but from challenging the audience to question the facts. I knew the investigator characters would never find a solution to who killed Kennedy, but I loved watching them try to figure it out.

When I’ve returned to the film over the years, JFK makes me feel as if I lived through that tragedy and residual turmoil suffered as the nation tried to come to terms with the assassination’s lasting impact. What stands out to me is the way that Stone so perfectly transplants the audience in the state of America and its relationship with John F. Kennedy leading up to the assassination. Stone uses the opening credits as a highlights reel of Kennedy’s time in office, showing candid stills and footage of the president amidst the many key political and social issues of the time. Although we see glimpses of Dallas on that fateful day, the opening of the film focuses more on America struggling with the tragedy, from Walter Cronkite’s teary address to the nation as he delivered the news to men in a bar celebrating Kennedy’s murder.

World Trade Center bypasses dealing with the array of emotional reactions that rippled through the country following the 9/11 attacks by focusing on the trapped officers who know nothing of what transpired or the families and first responders who are so caught up in uncertainty about the victims that they can’t react. Stone rarely shied away from confronting how human nature often overcomes our better judgment (think of Platoon or Wall Street), but he treaded more cautiously by avoiding such depictions in World Trade Center. “This is not a political movie,” Stone told The New York Times shortly before World Trade Center’s release. The only times he suggests it are in two cut-away shots, one featuring a Wisconsin cop saying “bastards” as he watches the destruction play out on television, and the other showing an ex-marine telling his office co-workers that America is now at war. That the movie cannot even address the anger, hopelessness, and drive for vengeance felt among many Americans in the aftermath of the attacks seems more untruthful than any of the speculative storytelling in JFK.

In the eight years since the release of World Trade Center, Oliver Stone has returned to the politically volatile issues that made him a Hollywood player, but with diminishing success. His 2008 follow-up, W., examined the life and legacy of George W. Bush but played more like a highlights reel of famous Bush foibles (choking on a pretzel, the "Mission Accomplished" banner) broadly performed by a third-rate sketch comedy group. Wall Street: Money Never Sleeps fared even worse, with Stone sidelining an examination of the Great Recession for hackneyed romance and a father/daughter reunion story that curb any potent political examinations.

More recently, Stone’s politicking moved to the Showtime network as a documentary series: Oliver Stone’s Secret History of the United States. He’s also written a script about Edward Snowden that he plans to make as his next feature film. I’ll likely see his future films just as I’ve trudged through the rest of his inconsistent filmography, but since World Trade Center, I no longer see the filmmaker trying to raise discussion or court controversy. I only see a showman grasping for relevance.

Charlie Riccardelli is a PhD student/teaching fellow in Creative Writing at the University of North Texas. His fiction and articles have appeared in Circa, The Copperfield Review, American Microreviews and Interviews, American Literary Review, Wilde Magazine, and Lamplighter, among others.He writes historical fiction set in and around his home state of New Jersey. He is working on his first novel.