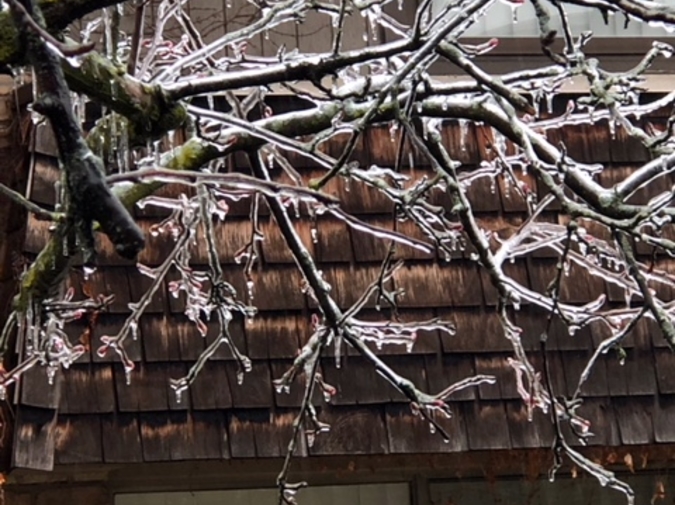 “Music is the sauce of life, don’t you think?” the pianist said, wearing a Santa hat, grinning jauntily at the audience. “The zip, the flavor. So here’s another song for ya. Here’s some sauce. If you’re feeling spicy yourself, feel free to sing along, won’t cha?”

Brian McKenzie was barely listening. Darcy Smith, the pretty redhead sipping foamy beer beside him, his classmate in cultural studies, kept scooching closer on the bench and giving him silent sultry glances. Her eyes were brown and so big. Not personally a fan of singalong piano bars, or any bar, really, Brian had sucked it up and planned this night out for Darcy, who he had guessed, correctly, would love this sort of thing. As soon as they arrived, she had gleefully filled out a request sheet, with songs by Adele and Bruno Mars, then leapt up from their table, which was long and wooden and filled with other college students, and navigated around the winter-themed floor decorations to reach the stage and add her sheet to the stack atop the piano. To stand out, to flatter the pianist, she had included a few funny requests, symphonies by Bach and Beethoven, as well as remarks about how super-friggin cool pianists were. At her urging, Brian, who on their sole prior date had confessed his secret drawing hobby, though not his even more secret virginity, had drawn swirling music note symbols in the margins.

Darcy turned suddenly cranky. “It’s been an hour,” she said above the pianist’s singing and the crowd’s singing along. “Do you think he’s ever gonna do any of ours?”

Brian grinned. “Sure! I mean, most likely. Even if he doesn’t, who cares, right?”

Brian was psyched too. Not about her requests—Tom Waits was more his groove—but about where things seemed to be headed. At the end of their first date, essentially just a long walk around campus on a lightly snowing night, so casual that he had wondered if it even counted as a date, Darcy had removed all doubt by kissing him goodnight with surprising passion, yanking him close with mittened hands and pressing her body against him, a real meld of a make-out. Several hours passed before Brian returned to earth. The idea that he might get to have sex with this brown-eyed beauty, with hair like fox fur, and a personality like splashing colors, sent delicious shock waves through him. But virgin was a sticking point. Did he have to tell her beforehand? It seemed like lying not to, but on the other hand, the truth might turn her off.

Their waitress swooped over, her apron reeking of beer and fried food, and asked Brian if they needed anything. Before he could reply, she turned to battle a huge pointy snowflake, one of dozens hanging from the ceiling, that had gotten snagged in her hair.

“Dang it all! Sorry. We hired a company to do decorations. If you ask me, they overkilled it. So, you folks ready for refills? Or some chili? The chili’s scrumptious.”

Brian looked at Darcy, who shook her head. “We’re good, thanks,” he said.

The pianist, an intensely grinning young man who Brian had disliked on sight, was currently shuffling through the stack of requests with one hand, tinkling the piano keys with the other. Then he launched into a soft-rock love song from the ‘90s. Brian shook his head. The problem with singalong piano bars was that there was nothing they would play that wasn’t obvious. So earnest was the pianist’s singing, no one sang along this time. At song’s end, he waved a hushing hand before the audience could applaud.

“No, wait,” he said, somber-faced. “Ladies and gentlemen, I have something to  confess.” He sighed darkly. “I have gotten so much ass from playing that song.”

His expression changed to glee. The crowd erupted into laughter and applause.

“Seriously, dudes. You want love for Christmas? You wanna get laid? Then learn the piano and learn that song. It’s worth the work, I promise. Snatch galore, man. Pooty heaven.” He leapt up, grinning crazily. “Break time! More sauce coming soon.”

Wincing, shocked, Brian turned to Darcy and his shock instantly doubled. She was holding a hand to her mouth, giggling behind it. Almost everyone else at the table was laughing or trying not to. Wondering if he’d been born in the wrong century, or the wrong world, or if it was a cosmic mistake that he’d been born at all, Brian forced a smile and hopped up to head to the restroom. The wintery floor decor—snowy castles and frosty ice shard clusters—glittered violently. Pausing to touch an ice shard, thigh-high and spike-shaped, he was surprised to feel dense metal beneath the thin sparkling cloth. Winter was cruelty. Maybe tomorrow he would draw a tropical beach scene. Returning from the restroom, he noticed a blonde girl wearing cat’s eye glasses yelling at her smirking date about sexist culture. She bolted up from her table and grabbed her jacket.

Brian felt warmed. Maybe he wasn’t alone in his disgust, after all. But he was dismayed to see that her tablemates were regarding her with annoyed contempt. That was another problem with piano bars: rebels left in a blaze of shame instead of glory.

Except the blonde in the cat’s eye glasses didn’t actually leave. Instead, she paused, then turned around and started smacking at her date’s face. The guy stood up and laughingly pushed her away. She stumbled over an ice shard, nearly tripping. Her lips spilled hot curses. She raced at the guy, who at first merely blocked her smacks, but soon got mad and started smacking her back. Brian, watching uneasily, rooting for the girl but starting to have doubts, considered intervening but had the feeling she didn’t want to be saved. A black-shirted bouncer materialized. He hip-checked the guy aside, sending him stumbling into ice castles, then only slightly less forcibly escorted the girl to the exit.

“Crazy, huh?” Darcy said when Brian got back to the table. “Fight night at the friggin piano bar. Hey, before I forget. I know this isn’t your idea of, like, a super-fun time. I mean, you really honor a girl. It’s hot. Most guys, they don’t make any effort.”

She rubbed his shoulder. Her eyes, framed by that feathery rust-red hair, radiated warmth and heat. She kissed his cheek, then leaned over to his ear and started whispering sex talk. Brian’s insides glowed like sunflowers. The virgin might fall this very night.

To their left, there was a thunk, followed by yelping. Brian and Darcy turned to look. A snowflake had come loose from its cord and fallen to the table. It had landed straight up and stayed there; one of its sharp star-points had gouged into the tabletop. The waitress zoomed over to apologize—“Eek, stormy weather, sorry folks”—and to yank out the snowflake. So deep was it lodged into the tabletop, it took her three tries.

Onstage, the pianist had just returned, looking buzzed and belchy. His Santa hat was faded and mangy. He shuffled the request sheets. Then, narrowing his eyes strangely, he turned to the audience and held up Darcy’s request. “Who did this one?” he said.

Brian, nudged by Darcy, grinned and raised a hand. “Yep, that’s us.”

The pianist sneered. “Bach? Beethoven? What kind of dumb requests are those? You think I can’t play that stuff, is that it?”

Startled, angry, but mostly just sorry for Darcy, who looked deeply wounded, Brian tried to make peace. “No, hey! We meant all respect. There’re other songs—”

The pianist cut him off with a series of classical chords. He paused, glaring, then played another angry snatch when Brian again tried to explain. Finally he turned back to the piano. “Yeah, don’t be stupid, everyone,” he said. “Request real stuff. Pub tunes, saucy songs. Like this one.” He launched into an old James Taylor ballad.

Brian zoned out, swarmed by a weird mix of embarrassment and outrage. Not that this was the first time things had gone awry when he had tried to do something nice for someone. As a kid, he had baked strawberry cupcakes as a birthday surprise for his favorite aunt, who scowled when she saw them and said she had just started a no-sweets diet. A few years later, at a Tom Waits concert with friends, he had found a wallet filled with cash and had been snidely called a pussy by the usher when he turned it in. A pussy! As if honesty were girly. As if girls were bad. Last year, for his parents’ anniversary, he had created a poster-board display, featuring photos of his parents through the years, painstakingly annotated, that was supremely upstaged by a similar-themed PowerPoint slide show that his brothers had jerkily neglected to tell him they had put together.

Brian refocused. The embarrassment was fading, the outrage blooming. He badly wanted to charge the stage and clobber the pianist senseless. That was one of Brian’s other secrets: he wasn’t afraid to fight and in fact, as now, often found it hard not to. Virginity kept him prickly and rumble-tough. But he knew that a fight would only further derail the date. His only hope was to get Darcy into a new environment, pronto.

He touched her shoulder. “Forget it, he’s a jerk,” he said. “You wanna bounce?”

She nodded, her big eyes miserable, then got up and put on her purple puffer coat.

Brian grabbed his own coat, aware that they were getting some harsh looks, and aware that Darcy was aware of them too. There was, he now knew, no way to get this date back on track. Stupid pianist! No, focus. Stay calm, get her home safe. Live to date another day. He took her arm and guided her around the floor decor and toward the exit.

That did it. Brian turned and charged the stage. Here comes the beat-down sauce, asshole! Except almost instantly Brian was forcibly knocked off his feet and then, after sailing backwards, felt a screaming burst of pain through his lower back, then came to a crunching stop. Ceiling and snowflakes filled his sight. He was on the floor but also, somehow, stuck to it. In time he noticed that his stomach had birthed a long white peak slickened with clumpy red syrup. What the hell? How could—oh, no. Oh, fuck.

As he lay on the floor, bleeding, watching the chaos of people racing around above him, Brian tearfully pieced together what had happened. The bouncer, rushing in to protect the pianist, had pushed Brian away, and Brian had fallen backwards onto an ice shard, which had impaled him. Freak accident, nobody’s fault. But then, life itself was freakish. Who could have guessed that slender Aunt Julie would go on a diet? Or that college, a hopeful fresh start after years of loneliness, would turn out to be the end? But never mind. Warm things only. Sunflowers. Tom Waits’s “Martha.” Darcy knelt down beside him, eyes damp, lips crumbling, and held his hand. That make-out. Her melding body, her eager lips. He felt drowsy and terrified and dimming. Freshly baked cupcakes. Scooping them carefully out of their pan pits, then slathering each with just the right amount of pink frosting. Putting all his patient skill into the task. All his worthless love.

Mark Benedict is a graduate of the MFA Writing program at Sarah Lawrence College. Previous publications include short stories in Columbia Journal, Menacing Hedge, and Westchester Review. Mark enjoys hiking trails and watching movies. He first saw Vertigo as an undergrad and has never been the same since.