What Was Left Was Ours 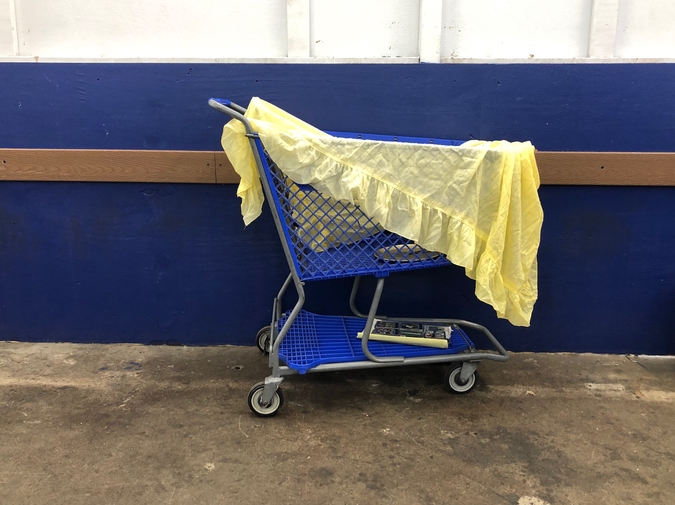 By the time they predicted apocalypse, we lived off Takis and energy drinks, but we always had. We ceased our daily commutes one by one, until the city closed most of the train lines and people pitched tents in the tunnels full of rats. Why bother with the pretense of health or ambition, when the world was ending and there were still snacks, drinks, trysts with another unwashed neighbor? The motes of bad air came in even if we closed the windows, so inside or out, all we could do was luxuriate or mope: an economy of movement that enabled our vices and tendency towards sloth.

It was the first year that air felt urgent, a thing you never think about until suddenly you do. We weren’t scientists. We hadn’t noticed the absence of birds on the sad park trees covered in scratchiti. It was hard to heed a canary in a coalmine when the sounds of the city rang so shrill; the pigeon population thinned and we rejoiced.

It was our bodies that began to warn us, lungs that balked at the particulate and then hacked little rainbows of spit. One day, blood-red; the next, a bruised purple with strands of yellow mucus in the sink, which Anais called me in to see.

Years before, I met her at the bookstore-cum-yoga studio where we’d been hired to shelve stock for $10 an hour by a loathsome woman in fuchsia lipstick and fair-trade pants. She’d grown up on the Upper West Side and opened this glorified gift shop underneath her new condo, where she filmed self-help videos and “tried to stay out of politics.”

Anais had metaphysics and I was retidying fiction for the third unnecessary time, hoping that some new arrangement of novels would finally make people buy them.

“Brring, brrrring,” Anais chimed, like an old rotary phone. I tried not to meet her eyes.

“Brrrring, brrrrrring,” she said again, this time more insistent, raising her eyebrows. I noticed they were thick and perfectly drawn. She had her fingers shaped around her ear like a receiver.

She held out a hardcover from the top of a display stack, a perennial best-seller that outpaced everything else. Calling on Abundance: How to Manifest the Life You Deserve.

I looked at my hand like it was the screen of an iPhone, paused, and swiped left on my palm to decline the call.

From then on, it was a joke. We took turns screening abundance until we got fired, and then moved to Sunset Park, and then Gowanus, and then here. Until we took up dumpster-diving and organizing and, finally, laying around together at the end of the world, still screening abundance’s calls when cell phones had ceased to matter except as flashlights.

By July, our notions of fulfillment sank to meet the crumbling world. Where once we pined for fresh sneakers or wrote app profiles to be sugar babies, we had turned to debating a timeline of global habitability. It was enough to fall asleep stoned or, if you were lucky, having just come near an attractive person. A warm person. Any person.

I did not often have the luxury of such things. I was homely and disliked showering, which had grown arduous—the fetching of water from the pond in Prospect Park, the heating of pails on the stovetop in our fourth-floor walk-up, the sloshing of measuring cups in the mildewed tub and then the residue of soap as it evaporated off my skin.

That spring, when I still slept with Kelvin from the bodega downstairs—a hasty, improbable coupling that only took place when we were drunk off sun-faded cans of Bud Light Lime—I would douse myself in an ancient bottle of Juniper Breeze, but then I ran out of that elixir, and he closed shop and moved to Jersey, leaving a stack of leftover merchandise and a note wishing us well. Anais and I had the whole upstairs to ourselves, and we would run around feral in our greyed underwear, doing cartwheels down the hall, bouncing a deflated basketball from one stairwell to the other.

Things in the city had been precipitous forever, but at the onset of the Weather Event, there were new, outward signifiers of doom. Everyone wore masks. In the winter, during a fresh snowfall tinted the color of Tang, the Mejias had an apocalipsis party where they charged $5 and Kelvin’s nephew DJ’d. We knew the situation was unsalvageable when the strollers and sack dresses disappeared and the pottery studio shut down the co-op. Still, there was something akin to paradise in those waning days while we waited for the impending finish, the earth’s grand finale that would equalize every brownstone and tenement.

In the deepest heat of summer, the guerilla radio station reporting a record-breaking heat, Anais and I walked into empty living rooms, shoving Persian rugs and jars of jam into our duffle bags like Supermarket Sweep. It became habit, a ritual Sunday outing. Anais favored the delicate gold jewelry she foraged out of bedside dishes, little bands and gold chains with pendants that said “Mommy” or “Elizabeth.” I grew a collection of half-eaten nut butters from the health food store and hoarded hardcovers that were always checked out at the library, now mine to spill honey on in bed. People abandoned a little bit of everything, and so I wondered what they’d stowed in the last hurried hours of their escape: the practical? The sentimental? The luxurious or pragmatic? What was left was ours.

Those that remained were the ones like us who couldn’t flee upstate, and so the city turned colorful and queer. It was easy to differentiate the crustpunks from the trustpunks, because when the air quality sunk to a particular level, all of us choking up rivulets of dust, the latter called on family money and boarded the last Amtraks to Beacon or Cold Spring, into the pockets of the country where you could still gulp oxygen as if from a mountain stream. Anais took a jug of water on a ferry across the river to Grand Central Station and sold each cup for $4 a pop. When she got back, we spread the pile of money on our stolen carpets and rolled around like puppies.

“It was wild,” she said, biting into a raw squash. “Just like Children of Men, only bankers wearing Patagonia and kids watching Peppa Pig on tablets.”

We found a battery-powered boom box in a vintage store no one had bothered to loot. We swaddled it in minidresses and silk button-ups to haul it the few miles home, securing the makeshift load with a bolo tie that still bore a $60 price tag. At Christmastime, Virgil and his family visited from two blocks down and no one could agree on what to play—the abandoned Top 40 station that looped Ariana Grande’s Sweetener continuously, or the staticky Russian joint that played Euro bops from Brighton Beach, still manned by some brave soul near the boardwalk. We cracked into a can of yams and some expired marshmallow fluff and danced to a dated banger in a language no one understood.

These festive, anarchic occasions were sometimes punctuated by an air horn—the signal to retreat, maybe to one of the bomb shelters with a rusty sign from when our parents were kids, or maybe into the bowels of the subway. We met Ursula down there, whose medication had run out and left her speaking to ghosts, who grew up in Crown Heights and promised she could shepherd us anywhere we wanted to go, any time of day, whether or not the moon was out. She had memorized a map of the world.

While we waited for the state of emergency to intensify or desist, to choke to death or walk upstairs, she would study an atlas and shake her head in consternation at some enemy we couldn’t see. Two of Virgil’s kids ricocheted down the stairs and into the station with us, and they slapped a deck of playing cards on the ground. A glossy, muscled rat ran by the tiled wall behind them.

“Go fish?” One said, and Anais took a handful of cards. They passed seventeen back to back rounds before the all clear – a MIDI song that sounded like the Mister Softee truck -- and she won almost every time while I glowered in a corner, picking at my leg hair. I managed to pull out a tiny patch, and dedicated myself to continuing these efforts in the hours with nothing to do. I wanted to guide someone’s hand down that square inch of smoothness in the course of undressing me, before we all up and died.

The wind was blowing in off the ocean, which meant it’d be worse again tonight, but back in the sunlight, at dusk, everyone began scattering to their respective homes. Ursula stroked my hair, a big coarse mat down to my shoulders, and did not seem disgusted.

“Do you ever think about New Jersey?” I asked her. My glasses had broken a few weeks back so I couldn’t understand her expression, only that her face had transformed. “There are boats,” I said. “And we’ve got money. Nowhere else to spend it.”

There was a mall somewhere in the suburbs that had a state-of-the-art purifier, great ducts underpinning every story and spewing clean air down the endless aisles. Whole families had fled there to live among the piles of loafers and salted pretzels, the colorful mannequins in alligator polos holding Coach bags. All we had was the radio to corroborate this fantasy, but it persisted nonetheless, an idea we revisited privately or at night, when everything seemed worth saving.

“What gets saved?” Anais said later, “Or who? Not us. Not Ursula, that’s for sure. And that’s if this shit is even true. I’d rather suffocate in bed than get shot by Paul Blart Mall Cop.”

We had curled up on her mattress, swaddled in blankets. Virgil had traded us some of the weed he grew in a pot on his fire escape for our cans of baked beans, so we sat making lewd shadow puppets with our arms and legs tangled together. The boundaries of love and friendship had long dissolved; we were dirty and lonely.

“I have clinical depression,” she said in a frog-voice like the guy in an old video loop. In the distance, we heard a police car prowling, the wail of its siren echoing through the emptiness. There was no one left to arrest, and they wouldn’t give anyone a lift to the docks, but they could punch their timecards; they could always collect their pay, in some future the rest of us couldn’t imagine.

“Safe as houses,” Anais said, flopping onto her side. We fell asleep spooning with all the doors open, and sometime deep in the night, one of the feral cats from the lot next door wandered in. I woke up to his mean sooty face staring at me, caught with two feet on our blankets and two on the floor. I looked at Anais sleeping and wondered if this was a dream. When I woke the next morning, the sky was orange, and there were paw prints on the dusty floor where life had been.

Linnie Greene has written for outlets like Pitchfork, Fast Company, The Outline, & elsewhere, and has had fiction at The Nervous Breakdown and Joyland. She is a graduate of Tony Tulathimutte's CRIT writing workshop.