We Walk a Line 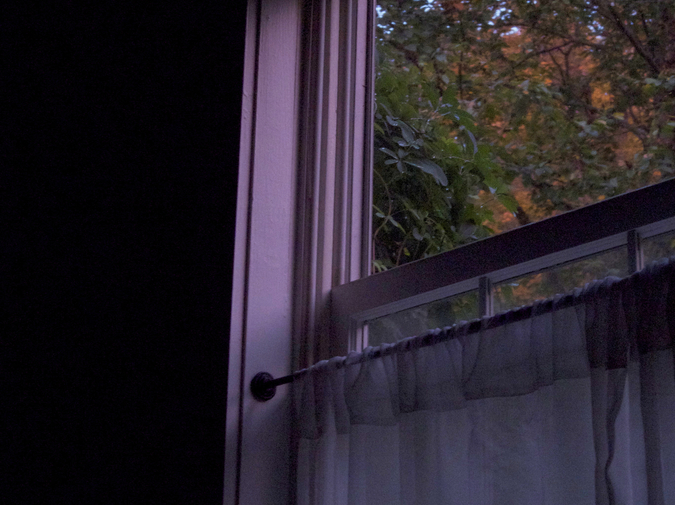 My roommate lives her life differently. This is what she claims. She says she does not own a credit card and hasn’t, she says, since she was twenty-two. I wonder but do not ask why. I imagine it’s of a personal nature.

Everywhere she goes, she walks or rides a bike. She says she will never buy a car. She doesn’t buy things made in China, either, and all her clothes are hand-me-downs—things her rich sister gave her, cardigans and red linen shawls. She does not own cleansing sprays or soaps or even a single bottle of shampoo, because the last time she washed her hair, she said, her scalp was dry for days.

“Those products are bad for you,” she says, and I never argue though I disagree. I tell her I think there’s something to be said for moderation. We walk a line, I say.

She says, “Consumerism’s a ring of fire.”

At night, in the kitchen, I watch as she eats only sausages from the Mennonite market and things she can coat in mayonnaise: coleslaw, potato salad. I never say anything, because it seems to me that what we eat is of our own concern; lately, though, I’ve noticed I’ve taken to making my dinner later, long after she’s gone to bed. I eat a lot of spaghetti with Bolognese—or, sometimes spaghetti, and sometimes rotini, and, on occasion, those little wagon wheels. They remind me—pleasantly—of childhood. But she threatens I’m going to get diabetes. Too much pasta, is what she says. I tell her the red sauce is good for me, and that often, it is homemade, and that the pasta gives me fiber and anyway, I spend my lunchtime eating salads. I tell her my grandmother had diabetes, that I know all about it and that I take that threat very seriously, but that I doubt—I sincerely doubt—that my spaghetti intake is going to make me ill. It seems to me there are a lot of worse things I could be eating: sausage and mayo exclusively, for example, and, after all, I drink a lot of water.

Yesterday, I returned from one such walk and found a vase of daffodils on our table. Where are they from, I wanted to know. It’s the first week of April and we live in an economically depressed area; you don’t spend what little you have on flowers.

“Next door,” is what she said. Next door is a mortuary. Every day, I watch the people come in and out from my small desk beside the window, watch the men arrive in their khaki pants, their faces hardened the way grief will harden. The women are always tearing up, makeup like watercolor under their eyes, and I’m always amazed at their blue and their fuchsia, how not once have I seen them wear black, because around here, the people tell me, a funeral is more a celebration of a life than a mourning of a definite passing.

Still, it bothers me about the flowers.

It bothers me about the flowers because I think these people need them most. Celebration of a life or mourning, the flowers—which grow along the mortuary’s brick and are the first thing these people see, the last thing they witness after witnessing a body—are theirs, I think, not ours.

That my roommate would pick them to put on our table—for what, a day? or maybe two?—evidences, to me, a vast discrepancy from the life she lives and the one she claims to live.

So I won’t feel bad anymore about my spaghetti.

Last night, after she’d gone to bed, I put the flowers back. I know it won’t make things better—they won’t regrow, retake to the earth—but for the next few days, while they’re still firm, planted deep in the soil and upright, it will seem as if nothing happened, as if a life is a life is a life.

Amy Butcher lives in Columbus, Ohio and her most recent essays appear in The Iowa Review, Gulf Coast, and Fourth Genre. Her first book, Visiting Hours, is forthcoming from Blue Rider Press/Penguin in April 2015.