We All Participate In Our Own Self-Manifested Stories:  An Interview with David Meiklejohn, Director of My Heart is an Idiot 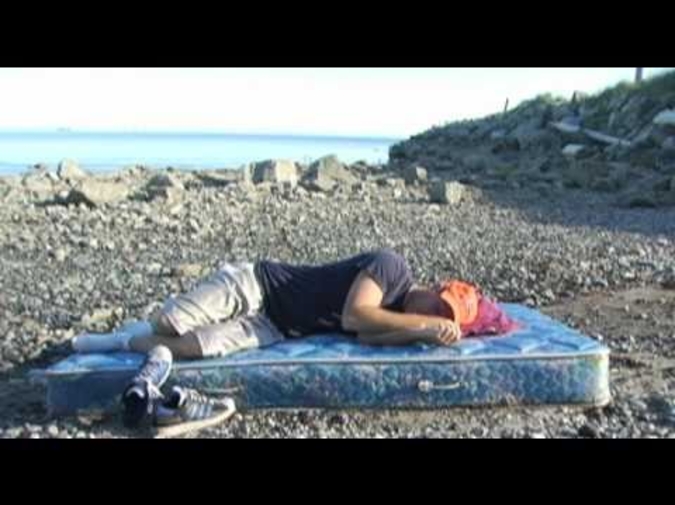 Its been quite a few years since I first met fellow Michigander Davy Rothbart. I, a bookseller in Seattle. He, a collector and presenter of found objects, the man behind FOUND MAGAZINE, a place where shy, shoegazing pedestrians who find strange, magical notes and lists and photos on the ground could share them with others. Rothbart has been touring, sharing finds, finding his way onto AM TV, morning radio, Believer essays, and This American Life broadcasts since then. He even published a fine book of short stories called The Lone Surfer of Montana, Kansas.

Rothbart is a talker. He's engaging. Storytelling. In other words, he's a fine subject for a documentary. And his friend—and FOUND finder David Meiklejohn—in an effort to produce a FOUND documentary instead found himself making one about Rothbart and his romantic trials.

The result, My Heart is an Idiot, is a fine piece of work. It's deeply voyeuristic—filled with old video tapes of Rothbart at low, overcome emotional moments—and one is given to a shudder or two because of it. Rothbart is, one finds, the best kind of unreliable narrator: he works to seem completely without artifice, but one can tell he's aware of the camera. So, he builds these little walls (as ALL of us would under such scrutiny) but consistently, inadvertently, beautifully, he can't help but hint at the things he's hiding. (There is, I should point out, not meant in that assessment a suggestion that Rothbart is a false or bad person. He's not. But all good storytellers live in the tension between hiding and revealing. They do it on the page, and they do it when they sit down and talk to you. Or when you film them. It is the nature of that personality.)

Meiklejohn, though, given hours of footage, and the many choices available to him as framer and editor of the story of Rothbart and his idiot heart, is the one with the responsibility to share with viewers only what they need to see to understand. And he does so, he acts in our best interests, with care and skill. Curious about his process, I sent him a few questions.

You set out to make a tour film for Found Magazine, yes? Would you call My Heart is an Idiota kind of accident, then?

Yes, My Heart is an Idiot began as the "FOUND Magazine Documentary." Davy had seen some of my short films and thought I'd be a good person to capture the magical weirdness of the FOUND tours. With all the fascinating people Davy and Peter would meet, and after so many curious experiences that happened to them, it seemed a shame that none of it was being preserved in any form. So I joined them in the van and traveled around the country, filming the whole while.

Davy and I had known each other for a few years, and we were both obsessed with romance. Most of our conversations were about people we were crushing on, stories about past loves, our successes and failures in relationships. When we started filming, these conversations worked their way into the film, and any time we found someone who was willing to talk with us on camera, Davy would grill them about their love life, and also solicit advice from them about his own situation.

Once I got done with the first two-month chunk of touring and filming, I looked at the footage and it was clear that the romantic stories captured—Davy's story and also the glimpses into other people's lives—would make a better documentary than one that was solely about FOUND. It was both surprising and inevitable that love would be the focus, given how much of our minds romance occupied.


Were you at all intimidated by the size of the topic? A tour documentary can be a lot of different things, but there is something concrete at the center. The abstracts "love" and "romance," though, are enormous.

I was less intimidated by the size of the topic than by the amount of footage I had. After four months of filming, I had 150 hours of tape out of which to construct some kind of narrative. Then a couple months after watching and re-watching all the footage, Davy gave me around 40 VHS tapes of stuff he shot when he was in high school and college. Most of that footage was typical of home videos—hanging out with friends in his dorm room, going on road trips, etc—but every so often I'd uncover a tape where Davy had set up the camera to film himself crying for 25 minutes straight because of a breakup. And what's uncanny about it is that there were multiple tapes like this, myriad times Davy felt compelled to document himself crying. Needless to say, that footage had to find its way into the film.

To answer your question, as much as love and romance are a part of the film, it's not about those abstract ideas. The film is about a few specific people struggling in their own particular ways with the common situations that arise during romantic pursuits. When I made the film, I didn't realize how relatable it would be to people who saw it. The conversations I've had with people who have seen it taught me that even the most singular personality can spark empathy and resonate in an emotional way. I predicted people would appreciate the quirky moments in the film but not invest themselves too heavily, but I was wrong. Audiences see pieces of themselves in the mistakes and triumphs shown in the film, which shows how universal these struggles are.


I was wondering about tension between documenting and retelling that occurs when you add the voice of Sarah to the story. While Davy's sections are straightforward, her sections include a level of artifice, a veneer, a veil. Davy certainly knows he's being filmed, and he can "manage" the story you will end up telling about him by revealing and hiding things about himself, but in the end he can only drive the story you tell about him a certain amount. With Sarah, it seems like you gave her more leeway to craft the story she tells about her relationship with Davy. Can you tell me about how you approached each storyline?

Because Davy and I had been friends for a few years before I started filming, and because I made it a point to have the camera with me at all times, it didn't take Davy long to grow comfortable with the camera's presence. Even if I wasn't recording, I would have the camera in my hands pointing at him, and that helped him learn to ignore it. That said, Davy is a gifted performer, and part of what makes him so fascinating to me how his work as a performer and storyteller seeps into his decision-making. For example, in the film with his pursuit of Alex you can see how he employs the strategies of narrative, because he's planning their wedding before they've really even dated. He envisions a romantic storyline and struggles to make it real. His personality is performative, which is not to say that he's insincere, but he's certainly aware of how we all participate in our own self-manifested stories.

The documentary starts as a simple tale about a boy pursuing a girl, and then a half hour in it's revealed that while Davy's been on tour, his girlfriend Sarah has been in Michigan. I liked revealing Sarah in this way because it showed the disconnect between Davy's life on the road and his life at home. Davy calls it "compartmentalizing," his ability to keep certain parts of his life disconnected from other parts. You see in the film how Davy's lifestyle lends itself to compartmentalizing, but also how it can lead to trouble pretty quickly.

After watching everything I shot on the road, I realized that the footage only told half of the story, so I asked Sarah if she would be involved with the project, and she agreed. We recorded a long interview where she recounted her relationship with Davy from her perspective, and that interview became her voiceover that you hear throughout the film. From that material, we both brainstormed imagery that would express her side of the story, and then we filmed that stuff together.

Some of her scenes are literal recreations of moments she's talking about in her voiceover, and other times we chose more lyrical imagery that expressed something emotional. The tiger mask, for example, was something Sarah really did put on during an intense interaction with Davy, but only for that one moment. In the film she wears the mask for months after that interaction, and although she didn't do that in real life, it expresses a type of guardedness she felt around Davy after finding out about his dishonesty with her.

I wanted Sarah to be involved in the crafting of her story not only because she's a hilarious, creative, likable person, but because she provides a powerful counter example to Davy's mode of storytelling. Sarah's story is told through a genuine interview and created visuals, while Davy's story is true documentary but with scripted narration and a general performative awareness throughout. In my own subtle film nerd way, I wanted to structurally illustrate how true stories can be told with varying types of artifice and yet still remain true.


Let's end, then, with a simple question: What makes a story "true"?

I'm still and always will be a mere student of film, and I can't pretend to have the wisdom to answer this question. That said, I love questions like this, and lately I've been fascinated with the difference between truth and facts, because they are not the same thing. Facts are not necessarily truthful, and a thoughtful curation of lies can be more honest than facts when arranged in a deceptive manner.

Film as we know it is visually limited by the frame, the rectangle of the image that we see. At its very core, film is selective, choosing tight portions of imagery in which to portray some aspect of a room, a landscape, a person. This type of selection happens in editing too, and it even happens with audiences, since they select where to focus their attention, what characters arouse their sympathies, which themes in a film merit conversation.

There is no way to capture the sensation of a moment except to be in that moment. Everything afterwards is shorthand and curated. Because of that, truth in storytelling, especially non-fiction storytelling, doesn't come from an accurate retelling, but rather a fidelity with reality. There's simply too much information for accuracy, but with craft and thought and talent and luck a story can be told that translates a deep emotional quality, some intangible truth. For me, highly-stylized fictional films ring truer than documentaries that constantly try to convince audiences how real they are. Documentaries that claim to be real are the biggest fiction of all.

My Heart is an Idiot has a relationship with truth, but unlike many documentaries it doesn't mask its stylization or defend its real or perceived truthfulness. Instead, it throws the mask on the audience, asking this question: In art, in love, in all of your life, is what you can prove more important what you want to believe? In that sense, maybe what makes storytelling true is the desire for that story to be true. Never underestimate the creative power of the audience, because they write half of every story with their own experience and interpretation. And I find that collaboration to be a beautiful, beautiful thing.

Matthew Simmons is the author of A Jello Horse (Publishing Genius Press, 2009). He is the interviews editor for Hobart.