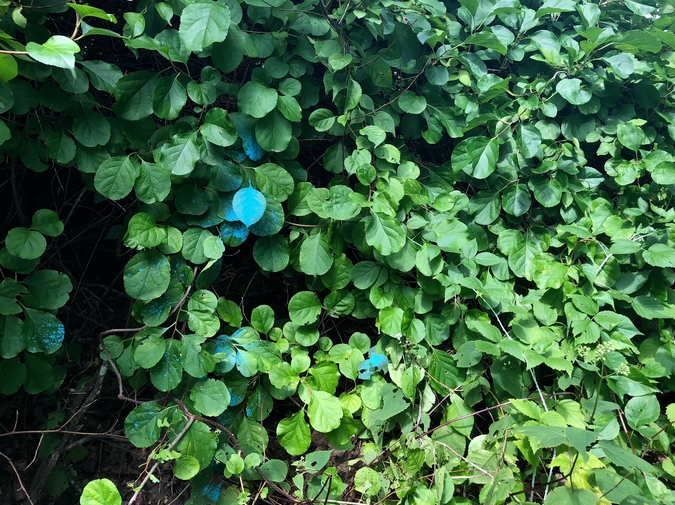 Up north she took her daughter for a walk to see the woods. Their host’s big yellow dog came along. The snow was deep. The dog was off and ranging. She crept under a fir tree and showed her daughter how it wasn’t so deep there, how the tree had sheltered the ground. There were marks in the smooth surface where clumps had come loose from the branches.

Near the river, their host’s yellow dog flushed a deer from the woods and they crashed together into the water. The dog swam after the deer, though she called him and called him, and her daughter called too. Trigger was his name. He didn’t come back. She saw the deer reach the far shore, but not climb out. It began to drift downriver.

She went to their host to tell him where Trigger had gone. Her daughter hugged her leg. Their host went out in his boat and she saw him come back later, from her window, with Trigger and the frozen deer. The grey sky tumbling over the river. He is a hunter but it wasn’t in season.

A man was stabbed in front of my apartment. When I asked the officer who was outside, he told me Saint Henri isn’t any more dangerous than other parts of the city. The officer was only sort of in uniform. They’ve been doing this thing for higher pay, they wear army pants and red ball caps, running shoes. They’ve been doing it for years.

For example: a piece of concrete weighing 25 tons fell from the Turcot Interchange. A section of the Viger tunnel collapsed. Also the de la Concorde overpass in Laval, which killed five people. Also an earlier bridge collapse in Laval, which killed one person. A nurse was shot accidentally by police. A mentally ill man was shot on purpose by police. It was while trying to shoot the mentally ill man that police accidentally shot, and killed, the nurse.

I considered the liver-coloured stain on the concrete walkway, darkening where it met the dirt of the lawn. “People are stabbed anywhere,” the officer said, stepping on the tape to let me through. “Anywhere you go.”