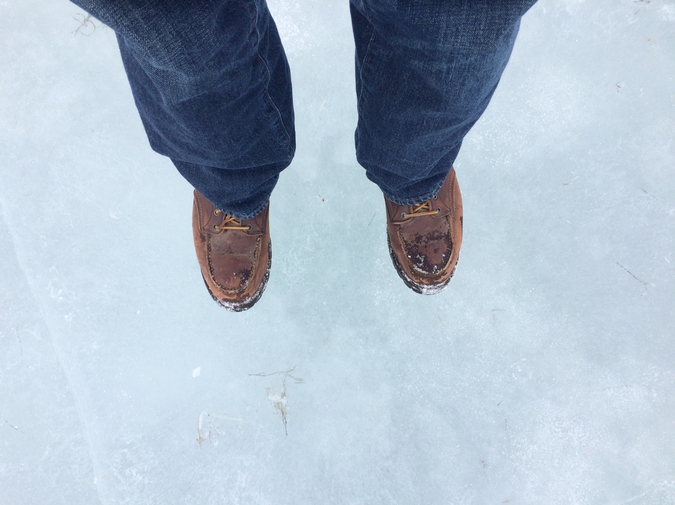 A Place To Be

I will be just north of Tromsø. I will be there to see the northern lights, aurora borealis, you know. It will be December, and cold, a type of cold that I will not even bother to qualify with simile or colloquialism; it’s the arctic circle, you can figure out how cold it will be. I’ll make my way just north of Tromsø via a miserable tourist caravan, and I won’t be proud of this fact, but I’ll indulge myself with the mantra, this is the only feasible way. It will be night time, though that won’t matter because in this part of the world in December, all time is night time. The caravan will arrive at the viewing point, a flat frozen landscape; flat for miles and miles, until the horizon is violently interrupted by mountains, distance uncertain, damn near infinite, oh my. Somewhere unseen is an ocean, somewhere unseen are sharks with toxic flesh, once drawn into the dark, empty corners of maps. The group will gather on the plain, set their jaded asses on heavy blankets, and wait. I’ll set my jaded ass on a blanket and wait, I will. Unremarkable moments will pass. An American will ask out loud where the fireworks are. I’ll tell him shut up, mortal. He will look at me, and in that moment, he will miss it, the coming of the lights. The crowd will let out a virginal gasp and he will turn, just a little too late. That night will be a short show, without encore, without great fanfare or roses. He will begin to take measures to curse at me, and then find, faced with my unwavering smile, he has nothing to say. The caravan, soon bored, will begin to move back toward civilization, clucking about amazement and disappointment and things to do tomorrow in the endless Norwegian night. But I will wish to stay there, watching the black expanse above, without a light to follow, damn near infinite, oh my.

Play Manual for Free Will

This is a 16-bit top-down adventure game, which, like many adventure games, is focused on a "hero." The individual characteristics of the hero are beyond unimportant, though many will feel that this is untrue. Make of it what you will. The hero does not move through the game-world; the game-world moves around the hero. This is not unique to Free Will, in fact, it is necessary to the game's engine, as with all games; regardless, it is important to keep this in mind at all times, for reasons that we have yet to fully understand. Through the controller you can manipulate the actions of the hero, engaging in a wide variety of activities, from the fantastic, to the grotesque, to the pornographic, to the mundane. All actions are reactions. Every action, however small, will gain points. You may choose to not manipulate the actions of the hero, whether this choice is made on ethical grounds, or out of a potentially sadistic sense of boredom. Conversely, the hero does not have to do what you want it to do. The hero believes it has free will. Potentially, the hero really does. These sorts of things are never entirely clear. But it is safe to say that the hero is incapable of forming beliefs, so the question of free will should be a moot point. Regardless, the hero may ignore you or act out in rebellion. The hero may not harm you, physically speaking, but may harm itself in an effort to cause you harm; we suggest you do not develop an emotional attachment to, or sense of dependency on, the hero. The hero may even also choose to do nothing. It is possible that both you and the hero may choose to do absolutely nothing but sit and watch each other (though, of course, it is a computer-generated character and is not "really" "watching" "you"), in which case the question may occur to you as to which of "you two" is gazing into the other's abyss, which is a question we suggest you not ask. Don't even think about asking it, because to think it is as good as asking it, which is no good at all. The game ends when the hero dies, like many good stories, and many bad. At the end, the points you have gained will be tallied up. The points mean nothing and offer no reward, they are only there on the basis of an admittedly questionable sense of aesthetics. Perhaps you enjoy large numbers; we sure do.

Bobby Rich is currently pursuing an MA in English at the University of Louisville, and is Co-Editor-in-Chief for the online literary magazine Miracle Monocle.