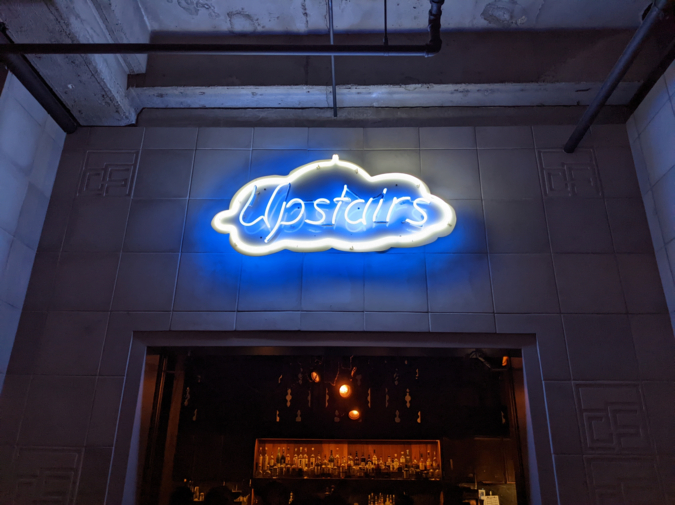 I’m on a date, or I think I am. I’m on a date that I’m not sure even is a date, at a bar I’ve never been to except it looks and feels like every other bar I’ve ever been to. I showed up two hours late because I was working up the nerve to cancel and then I fell asleep on the couch. Now I’m here and I don’t know what to do with my hands.

I’m touching my hair because I read about that online, because that’s how you’re supposed to act when you like someone. My hair’s falling out every time I run my hands through it, in big tufts, big enough to be disturbing, but the boy talking to me doesn’t seem to notice, which you’d think would make it better but somehow makes it worse. The boy says we should hang out again. I think I like the boy. I kind of nod but I can’t really say anything. I like the boy, but I’m not sure if he likes me. I can’t say anything to him unless I know he likes me.

My friends invite me to a dinner party, my friends who sleep through the night every night, my friends who make six figures, my friends who are happily coupled up and brush their hair before they leave their apartments and don’t live in the abject, humiliating messes of their puked-on shoes and empty boxes and dried-out tubes of mascara, their messy little lives.

I’m in a perpetual state of low-grade sickness. I haven’t slept and I’m sniffling every five seconds and my friends are looking at me out of the corners of their eyes like I’m going to embarrass them. I know they’re embarrassed of me. I know they want to know what’s wrong with me, but they’re too embarrassed to ask. But it’s ok. I’m cool. I’m cool and my clothes are archival and oversized and I’m too nervous to talk to anyone so I’m just standing in the corner looking rumpled and unhealthy.

In college, I was a poetry major. In college, I had nothing but thoughts. Too many thoughts to feel anything. You need to feel things to be a poet.

Now I have too many feelings to have any thoughts, like the victim of a botched lobotomy. You need to think things to be a person.

My friends tell me they’re starting to worry about me, like, seriously. They ask me if they can come over and I say sure. We sit there on my floor and they look at me with their big concerned eyes and they tell me how much they love me. I don’t know what to tell them back. It’s cool. I’m cool. I fiddle with the edges of the area rug until they leave. I know they don’t buy it. They don’t buy it and they leave anyway because they have other people to worry about.

I’m on a date and I’m back at the boy’s place, looking down at the street through the black bars of his balcony railing. The street is bright and wet with rain and it shines in the half-light. It’s beautiful. And cold, very cold. I want to lean against him, to smile, to tell him to look at the beautiful street. I want to, but I can’t. No one can ever know I want anything.

Coolness is an anchor, a fortress, a cold and remote puritanism. I never have any fun.

Another day, another dinner party. I’m not hungry. I ate six hundred and ninety-five calories worth of gummy sharks and threw them up in a planter before I came. Poor sharks. They were so blue. It was almost beautiful how blue they were.

Everyone leaves with the person they came with. My sharks are still in the planter. I walk home alone, a dark spot on the beautiful wet street.

Whatever I care for, someone else loves it
more, deserves it more

and then, later on:

and so, stupid me, I thought effluents were a kind of light, the fuzzy impressionistic light that sloughs off neon signs and the beams of car headlights through the rain.

I think I’m more in love with my friends than I could ever be with anyone else. I love them and they love other people. That’s what makes it real love.

This is a story about a girl named Magdalene.

At some point in her life she realized that the worst thing in the world was to be seen wanting, and so she stopped. She didn’t stop wanting things, she just stopped.

She had an overindulgent sense of luxury, a sparse response to necessity. She tried to be kind.

She sat with her friends and watched them cry. The more she saw, the more she couldn’t reach.

She gorged and she denied herself.

She stopped. And then she couldn’t get it back.

There was a bad thing that happened to her a long time ago and then it kept happening, like it kept happening over and over and every time she thought she was out from under it, it was over her again, like being under a wave, but every time the wave went in and up and back it took something, it took more, it took a little more, a little more, a slow erosion, and she was drowning, drowning—not even fighting it, just drowning forever under three inches of water.

She didn’t have enough and it was never enough. Maybe she had it once. That’s how she knew it was gone.

She did not write back. But she wrote—

I know I’m in love with you because I read your poem and I wanted to fucking die.

I know I’m in love with you but sometimes I feel like you’re an outline of a person, and you’re not, I know you’re not, but I think I made you up inside my head.

It’s not your fault.

I’m just passing through this town, this town of lines and shades and slants of light, I’m a cowboy in a tin city with my little tin boots on, I’m following footprints in the snow, I’m an architect, I’m drowning like Virginia, I’m howling like a wolf, I’m a poet, I’m Arthur Rimbaud, I’m a painter, I’m David Wonjarovicz on a train wearing a paper mask of Arthur Rimbaud, I’m Elliot Smith, I’m dying, I’m dying and I want to be, I’m on one, I’m spinning out, I’m standing on my toes, I’m a ballerina like my mommy, I’m leaving, I’m leaving you, I’m a rocketman, I’m a rocketman just like my daddy, I’m a kid playing dress-up, I’m your baby, I’m God, I’m like God but a girl, I’m older than God and I’m so tired—

It’s too much and I had it once but I don’t have it anymore.

It makes me want to die but I can’t die, I have to shut up and take it.

Leave now. Leave now or everyone will know.

Leave now or they will find you out.

She went to church and cried and cried, walking alone in the stained-glass light, walking around holding her own hand like it was someone else’s.

Walking around in a black-white dress. Losing all her interest.

Matilda Lin Berke is the Editorial Manager of the Adroit Journal. Her prose has appeared in The Magazine Antiques, Winter Tangerine, Forever Mag, and The Mars Review of Books.