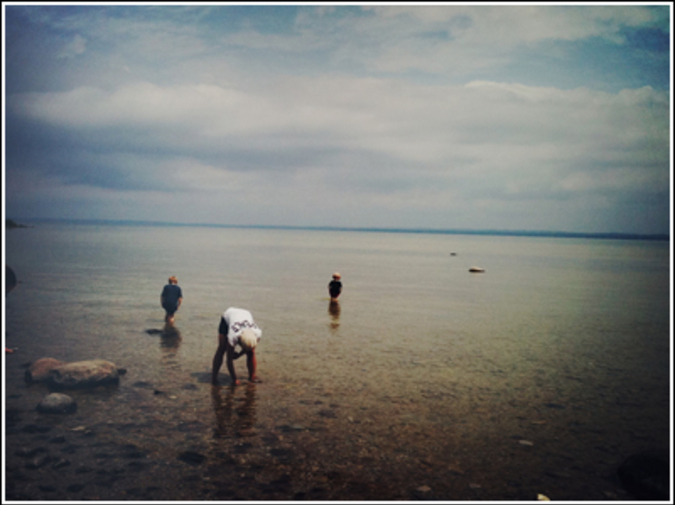 Day 1: Escaped labs today—power outage. (Years since our last repair; upset@SRSresearchers) In the sun, we’re some pretty fucked up “inventions.”

1: Role call (twelve of us left): animatronic horse with an FM radio for a heart and Victrola for a head (Randy).

1: Magic-8-Ball-Mortal Kombat arcade (Cassandra). I used to stare at her screen from across the lab. I got jealous when anyone played Raiden.

1: a tablesaw-cum-Nook (with uploaded NIV Bible) (Hector). He reminds everyone that the Higher Power is out there, keeping an eye on us.

2: I feel impure. Like a garbage can Frankenstein. What was I originally? Why do I deserve this?

4: She, the Prodigy, lives in Boise. If we can get there, she’ll take us apart. She’ll make us whole again. #manifestdesinty, #extensioncords.

4: @followers: Who the hell has ever been to Boise? #SavannahGA, #OregonTrail

5: Someone please chuck Hector in the river. “Finding an ass’s fresh jawbone, he grabbed it and struck down a thousand men.” I’m like, “What?”

7: Our guide Homer (GPS welded to a railroad pump trolley) pulled us into Atlanta with a wheeled barge. Nice weather. Things are looking up.

8: Raided a Staples (Hector said, “It is the gift of God”). Then toured the World of Coke. That whole Mentos trick? Totally worth it.

8: Up late with deep thoughts. Hector says it’ll be faster splitting up. Do we function maximally alone? I keep saying “Boise” like a command.

17: In camp, Randy passes out batteries, surge protectors, and mini-generators to those with one bar or less. Cassandra says, “Outlook Good.”

20: Reached Knoxville today. Not sure what I was expecting, but not this. It’s a Necropolis. Dead things everywhere, crows too. #GoodOl’RockyTop

20: Randy suggests a sing-a-long. Homer vetoes. Hector says he requires Randy’s D-batteries. I give a showing of Little Women—my only film.

20: Envy@JoMarch for cutting her hair. Now there’s a girl who knows how to make sacrifices. #WinonaRyder, #BeetlejuiceFanClub

35: They have us trapped on a bridge over the Mississippi. Didn’t know who “they” were until now: eyes black and brains stewish. #VaultSurvivors

36: Armed with mallets, they’re going for our fragile parts (grief@Randy, @Homer). Hector wants to give up. They just keep coming.

36: Finally broke free (@Randy’s charge). The six of us left, are we closer to our goal now, or even farther away? “Reply hazy, try again.”

49: Post mallet strike, Homer’s directions are spotty. In KS now, maybe OK. Found a Home Depot, but the employees wouldn’t let us in.

51: We’re lost. And out of AAs, AAAs, DieHards. My tires need air, my tank gas. I secretly let Cassandra hook up to my battery terminals.

51: Hector’s verses got to me: I prayed last night that our Higher Power really was in Boise. Then I shredded a few oak leaves to feel useful.

53: Will never, ever again set my party’s pace to “Grueling” and rations to “Bare bones” #OregonTrail

60: Somewhere in Colorado now. Someone sawed Homer in half overnight. Suspicion@Hector. “Indeed, the very hairs of your head are all numbered.”

61: I suggested we head north. Hector said we should fortify Denver. He told everyone that I’m not part compass.

61: Vote went to Hector. Even Cassandra. Others suspect me antiquated. @HigherPower: faith quickly becoming obsolete, yet all I have.

65: Denver was worse than Mississippi. (A lot worse.) We were captured, auctioned off. I went to an old woman for a Cat Stevens record.

66: Forced to play Little Women all day, every day—did I mention I’ve always wanted to be an Easy-Bake Oven? At least I have air and gas now.

67: An old woman’s hand will go through a paper shredder, if forced. #Will-It-Shred?

68: I found Hector, Randy, and Cassandra under a bridge. New guy (space heater-Ipad named Newt) is kind of a prick. Head north?

70: Randy and I pull a covered wagon. (Like the old days!) Sooo glad I don’t have to worry about dysentery or typhoid fever. #OregonTrail

70: Part shredder, part bike, part projector, part phone: I wouldn’t have made it this far, in one piece, without all of me. #TheMarchs

71: Something in Denver shook up Cassandra pretty bad; her blue liquid is too full of bubbles to read. Now all she says is “Finish Him.”

72: Windy. Newt won’t help pitch the tent—doesn’t want to “crack his touchscreen.” He keeps sneaking behind a rock to play Angry Birds.

73: When I said, “head north,” I didn’t mean this: Exposed. In the Rockies. In December. (eatingcrow@Hector) Newt has no app for this.

74: Cassandra and Newt talking a lot now. He knows how to do both of Raiden’s fatalities. It’s like I don’t know her anymore.

77: Blizzard. I’ve been trying to shred kindling all morning. Should we have brought offerings for the Prodigy? What if she’s too busy?

79: We’re camped in an old mine. I offered Cassandra some gas for warmth, but she said I wasn’t warm to begin with. #ValentinesDay, #SinglesClub

91: Hector left in hysterics. He fell through some lake ice. I pulled him out with the last of my gas. Cassandra said I should add “part hero.”

95: Blizzard’s over, but we’re running on no bars now. Would do anything for a solar panel. #GreenSolutionsonaBudget. Or a copy of Alive.

96: Envy@Randy—he and Newt fled. (Did not see that one coming.) Just me and Cassandra now. She’s actually a little creepy. (“Fatality.”)

99: A city in the distance, kinda sickly green. #Oz? No, just Boise at night.

100: The Prodigy is no Little Woman. She is a child: “Toys!” She took Cassandra into her garage. I’m alone for the first time. Very alone.

100: Prodigy returns with a joystick in one hand and a wrench in the other. She’s covered in blue stains. She’s smiling.

100: @TheSinner’sCorpse: After today, I’m afraid of how little my new profile will have to say about who I’ve been.

Alexander Lumans is originally from SC where he grew up in the runoff from the Savannah River Site. His fiction has been published in or is forthcoming from Story Quarterly, Greensboro Review, Black Warrior Review, Cincinnati Review, Blackbird, The Normal School, Surreal South '11, and The Book of Villains, among others. He was a Tennessee Williams Scholar at the 2010 Sewanee Writers’ Conference and he won the 2011 Barry Hannah Fiction Prize from The Yalobusha Review. Recently, he was awarded a MacDowell Colony Fellowship. He graduated from the M.F.A. Fiction Program at Southern Illinois University Carbondale. He now lives in Boulder, CO. And he does have a Twitter account (@OldManLumans) which, for now, is post-apocalyptic only part of the time.