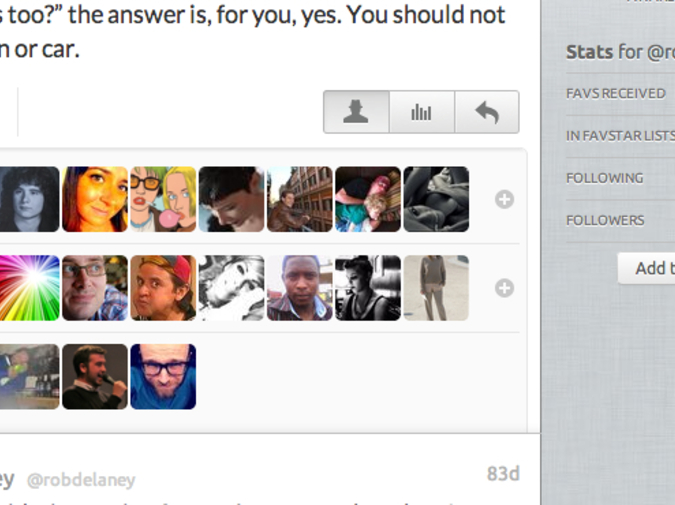 And then there's Rob Delaney. The next time Rob Delaney tweets—which is probably going to be in the next half hour or so—almost 750,000 people will have it pop up in their feeds. (Give or take a few hundred or thousand bots, of course.)

Delaney is a stand-up comic, and a talented one. He's a comic actor and improviser. He writes funnily and honestly about the ups and downs of his life, about sex and politics.

And then there are the things he does on Twitter—which are the same things, except in little, constrained bits. All day long. A dozen times a day. Sometimes more.

He tweets disarmingly. He manages to pull off something really difficult: he tells dirty jokes that come off like zen koans. He seems earnestly crass. He sometimes seems to have a long, cartoon tongue lolling on the ground in front of him for any woman who walks by, but you can imagine him pissed as hell about pay inequity. He fights injustice with perfectly formed, completely juvenile insults.

That is to say, his tweets comfortably embody contradictions. They are elegant as fuck.

And, heck, he was sort of the only good thing about the 2012 presidential election.

He was kind enough to field a few questions from me. Here's what he had to say.

A couple of bits of introductory info: How long have you been on Twitter at this point? And how long doing standup?

Comics often talk about finding success at about the time they find their "voice." The constraints of Twitter, too, seem to loosen up when one finds one's voice. Can you identify a particular tweet that, too you, broke things open? Suggested to you, "This is it. This is my Twitter voice." And in what ways do you think your Twitter and stand-up voices are adjacent?

I suppose the tweet that I can first recall being exponentially more popular than those that came before it was "I like the taste of pussy. It has to be ON pussy though; it can't be like, in yogurt or on a pizza." That's a tweet that is both filthy and absurd, which is definitely somewhere I enjoy spending time. I tweet from a lot of different points of view, so I don't worry about being purely "one thing" on there, nor do I think people care about that really. I don't care if one tweet "clashes" with the one that came before or after it.

My standup is much more one guy (me) talking about how he truly feels about life, love, fear, sex, horror, curiosity, etc. So tonally it flows more and is way more cohesive and you can "accept" it coming out of one dude's mouth and reconcile all that, where as on Twitter it would be reasonable to be like "What the hell is this guy talking about? Is this one person?"

The "taste of pussy" tweet has actually made it into your act, yes? Can you sometimes tell when a tweet is both 1) good as a tweet and 2) has enough room, concept-wise, to become an explorable stand-up joke?

Yes, the "taste of pussy" tweet did make it in my act. For a tweet to make it into standup it has to be conversational. A tweet can be hilarious when you read it but be completely unfunny when said out loud, so many, many tweets wouldn't work as standup. If they're observational and feel like the tip of an iceberg, they may well be able to function as a bit onstage or as its launching off point.

WELL if we're talking about Twitter, I really try not to think in terms of consistency. I have running themes that I return to, like the "dangers" of marijuana and enjoying natural women's bodies, but I don't censor myself in terms of "Will this 'fit' with previous tweets or anyone's idea of what it is I do?" And I'm glad you think I'd be respectful to your mother. I would be. I truly try to be polite and pleasant and real life and find I'm happier when I am. And so are moms, like yours.

Can you say a little more about finding yourself happier when you act politely and pleasantly? You've talked pretty openly about depression, and I think one of the things I like about you is that we have it in common. I've noticed that a really good weapon in the war on depression is just holding the door open for every person who arrives at a door at the same time I do.

Yes, well I suppose the Golden Rule is considered golden is because it's just unassailable truth. It feels good to be nice. Selfishly, acting in a kind manner makes your brain produce serotonin or dopamine or whatever, so it's a good idea even outside of any sense of obligation to be kind. Plus as someone once said to me, "It takes just as much time to be nice as it does to be an asshole." I try to generally pick nice.

What about the creative process. You—and, really, all interesting Twitter users—have some subjects you go back to. Sex & bodies (especially real, "imperfect"), pot (and the way it kills), the way you smell, your family, Matt Pike—and for a while there, Mitt Romney. Do you use those subjects to kickstart your brain's "joke pathways?"

At present, I don't really sit around trying to think up jokes. My mind is ALWAYS in joke creation mode, be it for standup, the book I'm writing, TV show ideas, an article or whatever, so the "machine" is always running so to speak. I suppose with the pot jokes, I will sometimes think "What's the most incorrect, insane thing I could say about pot right now?" I WISH that wasn't so funny to me. It's the FURTHEST thing from an original joke idea too; it's like Dragnet/Reefer Madness hysteria that I just can't get enough of. But just enough people are always fooled by it and that delights me to no end. It's like trolling for beginners.

Did you train yourself to be in joke creation mode or do you think you've always sort of been there? I was doing some research recently, and found that as they were originally conceived of, there were only three Muses. The name of one of the three, Melete, translates as "practice." As in, inspiration comes through the exercise of one's creative faculties. Because one can tweet from one's phone at pretty much any hour of the day in almost any circumstance, it seems like it might heighten one's awareness of their joke mode. Because every moment is not just an opportunity for material, it's an opportunity for material right now. Did Twitter speed up your joke brain?

HELL YES. If writing a joke makes a groove in the brain that other jokes can roll down, my groove is now a subway tunnel. That doesn't mean they're all good—they're not—but I am generally attuned to what is funny and what others will find funny. I guess it's like I'm always "warmed up," so to speak.

I've been told you really like poetry. Who's your favorite poet? Twitter insists you work hard to communicate meaning as concisely as possible. This skill is in some ways a poet's skill. Did poetry help you, say, favor the phrase "in a cop's ass" to "in a police officer's ass"?

While, yes, I love poetry, I'm a novice in my appreciation of it. I am so happy that Tricia Lockwood and Megan Amram are writing such robust, explosive poems as we speak for us to gobble up. Sarah Cortez is great. I love Wislawa Szymborska and it was fun being alive for a few of the same decades as her. I love Stephen Crane and Rilke. And what an amazing, specific question you've asked about law enforcement ass. "Cop's ass" just sounds more percussive and compact that "police officer's ass." Sure, they mean the same thing, but the music of the language is as important in a poem as the meaning, so COP'S ASS IT IS.

How to Undress a Cop by Sarah Cortez is jerk worthy. Or go straight to Anais Nin's erotica if you need to splooge in a jiffy. That's not poetry per se, but I don't "play by the rules."

Who's Karen? How's she taking all this? Does she follow you, you think? (I think the actual question here is, what do you think the value of a real comic foil is to one you made up?)

Karen is not real. I would NEVER harass a real person like that. I worry that neighbors that I DO know wonder if they're Karen and are afraid of me. The value of a made-up comic foil is as great or perhaps greater than the value of a real one, because you can use them to explore aspects of your own personality/psyche where you're really freer to plumb much deeper. Like how in David Lynch's films, he'll sometimes physically split his protagonist in two, or have characters that are shadows of other characters. Or how Lady Gaga sort of unhinges her skull and says "Let's take a look at what we find in here," and we see characters that rhyme or exist harmoniously (or with exciting/beautiful dissonance) whereas someone like Katy Perry's different tone-deaf incarnations or "McPersonalities" cannot be reconciled and thus read false.

For my tastes, it was "De Vermis Mysteriis" by High on Fire. Matt Pike is an explorer and that album is a nasty new map.

You're working on a book. Can you hint at its contents?

It's a memoir. It's not in order or anything and I meander like a son of a gun, but it's a funny memoir. I hated writing the first draft. And when I say hated, I mean visceral, angry, crushing hate. The second draft, after editors have looked at it and asked me a bunch of questions, has actually been a pleasure to write. Writing a book has, for me, been harder than raising a child. A child requires more effort, but they'll occasionally smile or say "thank you." A book just sits there, silently telling you to go fuck yourself.

TWITTER PEOPLE is an interview series for which Matthew Simmons will be attempting to talk to every single human being with a Twitter account one by one. This is his third.