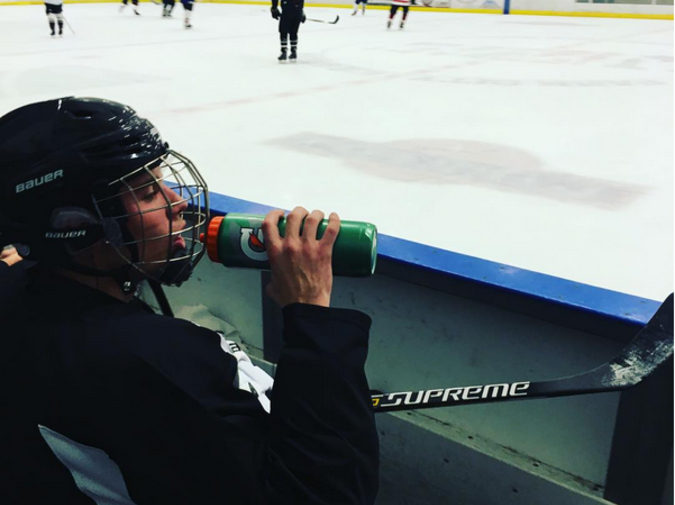 We’d been scrimmaging for ten or fifteen minutes, and so far no Biebs. But his bodyguards were watching the game, so there was still hope. Tuesday night, Park City, Utah. I’d positioned myself in the net closest the lobby, trying to catch glimpses. The lobby seemed to be hosting an unusual accumulation of very attractive people. A potential posse.

When Eli, the other goalie, lugged his bag into the locker room and made the announcement, I’d assumed that Bieber was the nickname of some local hockey player everybody except me knew. He needed gear, Eli said. The only hockey store was down in Salt Lake and had been closed for a few hours.

“I can’t focus,” I told Tommy after sucking in warm-ups. “I can’t stop thinking about Justin.”

I write mostly fiction, but I recently realized that almost all the non-fiction I’ve put out into the world concerns my few minor brushes with celebrity, as if life isn’t worth much unless it’s happening proximal to someone famous. I’ll further interrogate what this tendency says about me—but later, and privately. This essay is about the moment I heard a gloved fist pounding on the plexiglass behind my net, and I turned around, and there was Justin Bieber.

I didn’t know how to act. I was kind of impressed that we didn’t have to sign any papers or get a lecture from the bodyguard detailing what would happen to us if we damaged one of the world’s most precious commodities. I was tending net for the dark jerseys, so Justin would be on my team until Eli and I switched sides halfway through. I saw him introduce himself to the two guys sitting on my team’s bench, bump gloves.

A buddy from Justin’s crew was playing on the other team. Their gear was new, top-of-the-line. Justin had kind of a Bambi thing going on with his ankles. He started off mostly on defense, hanging back, occupying relatively deserted sectors of ice surface. He slapped his stick on the ice frequently, calling for passes when he shouldn’t have.

Were they avoiding passing him the puck?

I’m always looking for circuitous routes into the NHL that don’t involve me having played Division One hockey a decade ago. I was entertaining fantasies that Justin would see how good I was and tweet a picture of the two of us with the caption: “Best goalee eva,” after which I’d receive an invitation to practice with the Buffalo Sabres just as, like, a joke, and I’d quickly show that I am no joke.

Why was I thinking this? Because I am a joke.

Because the human mind exposed on the page is a sick and pitiful thing. (I’m also very brave.)

Same reason why when Tommy got a breakaway, I was psychically blasting at him YOU WOULDN’T DARE SCORE ON ME IN FRONT OF JUSTIN! Tommy hit the crossbar, but someone soon fired one past my glove, and immediately I looked up expecting to see Justin crestfallen and speechless. He was skating to the bench. I couldn’t say for sure whether or not he even knew his team had been scored on.

Every time Justin leapt over the boards, his bodyguard would pull out his iPhone and start filming. Then, when he returned to the bench, he would curate the footage. His posse had dispersed throughout the rink. Two stylish guys were sitting in the stands, a stunning blonde/porcelain wisp of girl who wasn’t Selena was hanging out by the doors that led to the locker rooms, and a half dozen or so Beliebers were keeping warm in the lobby.

He slashed someone really hard in the shins, which alarmed me until I realized it was his buddy.

I was increasingly worried that Justin would decide he’d had enough, that I wouldn’t get the chance to play against him. But 10:05 finally rolled around, the approximate halfway point, and I made the switch with Eli.

Justin had abandoned any attempt to play defense. Drop-in hockey is not usually a showcase of defensive skills, but a few of the guys—Tommy, I’m looking at you—were taking extra special care to keep the Biebs from getting any good chances. Every time the puck got poked away from him, he would slam his stick on the ice and kind of, like, puff up. Like a territorial bird. I’m not sure that he ever even breached his team’s defensive zone in the second half of the scrimmage. He spent all his time “cherry-picking” up by the red line. Come on, let him get past you just once. He dealt Hagn a beachball-strength check in the corner, perhaps only half realizing that drop-in, where most of the guys don’t wear shoulder pads, is pretty no-check.

“He wasn’t even looking…” I said to one of my defensemen after a particularly fine save.

At one point, Justin’s stick got swatted and went flying. He hesitated for a moment, before strut-skating to the bench. This is not something a hockey player would normally do, just leave an unbroken stick on the ice during a non-competitive game. Someone eventually pushed the stick over to the dark team’s bench. “Pick it up,” Tony heard him say. For a second, Tony thought Justin was talking to him. Turns out he was talking to his bodyguard.

Look, I’m being hard on the Biebs. Yes, he bought thousands of dollars of equipment that he might never use again. Yes, he refused photographs and signatures with the very few non-posse people in the lobby. Yes, he was obviously image-conscious. But he was basically friendly, and he was probably having as normal a night among strangers as is possible in his world.

Oh, and he really wanted a goal. In my head I’d been revising over and over the status update I would post immediately upon arriving home that night (and of course whether or not he got a shot on me would have significant bearings). I was thinking about that ridiculous story a few months back where Vladimir Putin scored seven goals on his birthday in a game against former NHL-ers. Was I going to let Bieber score? Maybe if he scored a goal we’d take a photo afterwards, just the Biebs and me. In the photo, I’d be giving him this dirty look for having sniped one.

In the end, I didn’t have a choice. In the end—if a heartthrob pop icon scoring a goal on you is shameful—the actual goal was as unhumiliating as it could have been. Sometimes the assist is the real goal, and I think it was Heimo who ended up feeding him what was basically a backdoor tap-in. I lunged over to my glove side, but the Biebs had a lot of net to shoot at.

A hyperbolic analogy seems to be called for, but none are really game-ready. All the air left the rink? My life divided into two? I was like a virgin getting scored on for the very first time?

Nope. They call it drop-in hockey, and sometimes it’s Justin Bieber who drops in. And scores a goal on you.

He was very excited. He threw his hands up in the air, shouted, “That’s what I needed!”

If my dignity needs preserving, I can at least report that I stopped Justin on a half-break a minute later. Left pad save. But, as his posse immediately rolled out after that shift was over, it was clear his work was done. If the incident was reported on by some desperate news outlet, the report would be that he scored a goal. That’s what he needed.

As I would joke later, “After he left… what was the point?” We still had another twenty or so minutes of drop-in, and maybe it was mental exhaustion that caused me to basically turn into a garage door.

In the locker room afterwards, we tried to decompress. We had to navigate a tricky situation: be star-struck—but not too star-struck. Make light of the fact that every single one of us would regale future family members and friends and strangers with the story of tonight for the rest of our lives. A few of the guys—Tony…—hid their obvious celebrity crushes behind tough words about what a little shit he was. “At least you guys didn’t get scored on by him,” I groaned, mortified-proud.

We were all pretty sure that the bodyguard had accidentally stowed his phone during the shift Justin scored—which is the reason why several thousand people did not watch footage of me getting scored on by Justin Bieber that night. Thankfully?

At the Boneyard (yes, that’s the name of the bar we get all homosocial at afterwards), we tried to drink the night into reality. I splurged on a seven dollar Unibroue because that’s how I roll now. We looked at Justin’s Instagram account. Tommy’s girlfriend can be seen sitting in the stands in one of the photos. That girl totally thinks she’s got a shot at the Biebs, was one comment. I attacked an abandoned plate of fries. An “extra” beer was put in my hand by the waiter. The Sabres game was on replay. I didn’t give a shiiiit about the 40-pages of George Herbert poems I wasn’t going to read for Genealogies of the Lyric the next day.

Joe Sacksteder is a PhD student at the University of Utah. Publications include Sleepingfish, Passages North,Booth, and The Literary Review. He's the new media editor of Quarterly West and a film reviewer for The Rumpus.