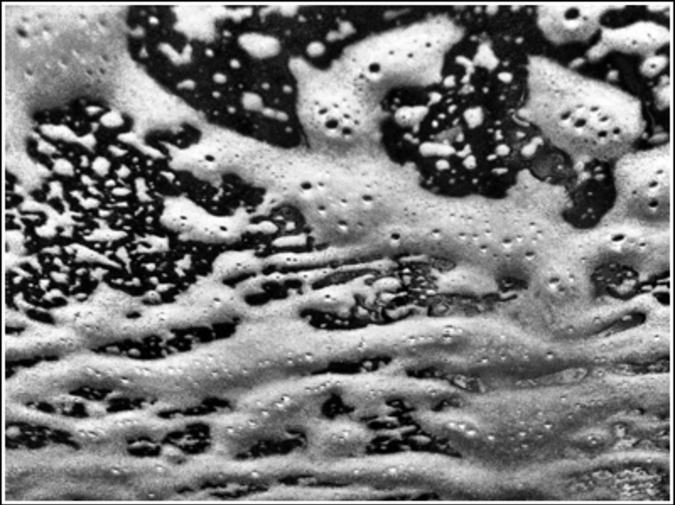 Presume a bathroom and a row of yellow and hotly round fluorescents above the mirror. Presume a young woman with her hip to the linoleum, her temple to her wrist. She cleans with her free hand. She waits for feet sounds, a knock. She won’t stop scrubbing until the quiet breaks, however it does break. Horribly or worse. You know her, knew her maybe. Her name is Harriet. She’s twenty-two years old.

She’s scrubbed the toilet twice tonight. She’s cleaned the sink and stained an old sock purple with scum. She’s taken the plastic net, the same net tangerines come in at Fred Meyer, and made a hammock for the soap. It’s sort of cute—no soap scum this way. Jon will like that. She counts on this. Her very own mousetrap.

Presume that earlier someone raised the possibility of going out. Tensions rose regarding money, and Jon got upset, and Harriet slammed the bathroom door, assuming a cuticle shape on the floor, brooding like this for twenty minutes, then starting to clean. Presume the bathroom as apology, for not knowing how to help or how to allow him to talk, for not understanding temper—which we can agree, she’s lucky to live without. She’s considered trying to talk things out. She assumes—has come to assume—that just talking won’t work, that even if she did say the right thing she’d botch it somehow. Telling herself this, she turns on the faucet as hot as it goes, filling her face with steam and her hands with stab. This at least accomplishes brief distraction.

It remains to be seen if he’s still scowling beside the cardboard box table in the living room. She isn’t sure of how long it’s been. The exact time escapes her. He may be pretending to sleep on the air mattress, thinking grudging thoughts. Wringing the sock of scalding water, she permits this possibility. Her brown fingers are raisiny and almost pink.

Presume that a year ago and on a liberal arts campus in the Midwest their relationship flourished, glowed, and that for friends closely and distantly acquainted they represented an inexplicable phenomenon. Two really good-looking people that could actually stand each other. Two people that shared a visible trust and transparency that for onlookers inspired envy, and if not envy certainly that brand of envy most of us voice as ridicule. Presume when these same people heard about the couple’s post-graduate plans—to move to a new city, to find jobs, to move in together, to dive into something new and unknown and mysterious—presume their first reactions featured, quietly but importantly, the slightest blips of concern, a millisecond pause, a whisper that spoke from an invisible third person who hunched between the couple’s good-looking shoulders, his face bright with the very foreboding that friends and family members concealed so well: this could turn out badly.

Harriet caught on to this, saw it coming. The blips and anxiety and second-guessing. She anticipated the present funk. She’s got sound judgment, a fine intuitive sense. But now, in the fall and in the thing itself—facing not having jobs and running out of money and not liking the city enough to want to make it there, facing most of all the vast miles between them and their families, their previous lives so totally over and distant—Harriet can tell, on a certain crucial level, that their first bold step into the world isn’t working. She assumes Jon’s thinking the same. She makes assumptions upon assumptions. She tries to be smart and strong and loving. But to be smart and strong and loving when the man you’re trying to love has shed his skin of collegiate confidence and emotional untouchability and shown himself to be thin-skinned, moody, self-critical in the extreme, this is very, very hard. She aches for him to just man up. To surprise her and be strong again. She aches for this without really realizing it. She assumes all this without realizing it, and assumes, also obliviously, that feeling sick to death of the assumptions and mind-games and worrying is simply part and parcel, and that it’s not a thing to think about, not a thing anyone (let alone Harriet) could actually change. How do you change worry?

So when she first hears it, the noise, she’s elated.

It breaks out, and she jumps in place, doesn’t quite know what she heard. But she turns to the door and her first thought is that it’s Jon and her face opens, in anticipation of the door opening, his apology, his saying everything and more. Her eyes are probably red, she thinks. She waits for the door, poised on the rim of the tub. Her heart rattles in her throat. She thinks how wonderful it is that exactly what she wants to happen is happening. The moment is so huge she could dive into it. She could grab him and they could run for it: sprint before the incision of the moment that follows and cut off the quiet and neither of them knowing what to say. Her face is still open. The confusion and worry and fear suddenly seem miniscule, tamable. She can almost picture him.

Except the noise is a gurgle in the bath drain, shrill and rising up the pipe. It’s a purl from deep under the floor. It sounds out again, louder. Harriet leaps, flattening her back to the door, clutching the knob in one hand. She’d scream, but her breath is stolen. She’d run, but it rises first. All this happens very quickly. Up through the drain holes—each no bigger than the FDR on a dime—comes a clear quick oil, a burnt yellowish fluid, pressing to the sides of the tub and filling the bowl of it, frenzying like visible summer heat, busy and alive. Inside it there are cables, thin concentrations of blue and red. Veins, she thinks. They are veins, clumping in the drain hole then untangling into the tub. After the veins: the curl and flex of muscles, bones that ooze up and straighten and firm, pale sheets that flap out like bedding then assume, within instants, the stretch and glow of skin. All of this circles the inside of the tub in a kind of school. All the movements are congregated, purposeful—one piece following the next, another piece following after to wrap them both up. Everything links together. Smaller pieces circling, becoming larger pieces. These movements synchronize and collect until the school of parts assumes a quality of substance, opaqueness. And with it: skin, a long ridged spine, the capacity to turn over and make itself comfortable. Which is what happens. The old man in the tub opens his lips, sighing and drowsy. The oil recedes down the drain. Warm, reeking of cumin, the old man turns over in his sleep and readjusts his head in the corner of the bathroom. Pink dots cover his nose. His curved feet end in bulbs of red toe. His penis is a crinkled nub against his leg. He snores.

Harriet doesn’t kneel so much as collapse against the door. She leans incrementally forward and what she feels isn’t exactly bewilderment but is more like curiosity. And something else as well. She recognizes it, a dim distant thing, a thing she can tell she’s glanced before and grown accustomed to. Seeing it so often has made it dull, meaningless. She recognizes him. It’s not that she’s seen him before. It’s nothing like that. But the feeling that accompanies him, the largely obvious feeling, comes a little closer. She holds it. Then she gets it. She will take care of him. She will wrap him in bed sheets and stay up watching him and lend him her body’s warmth. She can see ahead into the weeks of rest and sheets and calls down the hallway, the grinding routine, the figuring him out—reading what he can say and reading out what he can’t say and getting these confused and both of them getting angry at each other. She sees the daily thankless tedium, the care and exasperation and boredom and tenderness—all of it casual—the obligation and acquiescence, the wanting badly what she hasn’t done yet, the forgetting gradually and over time the things she used to dream of. She pictures herself taking care of him anyway. Bizarrely, she wants to do this. She never knew she’d want to do this. Not in this exact way. Not really.

She steps out of the bathroom and is careful to bring the door just part way shut.

Traffic lights spill in the front window, into the room, and no furniture is there to catch them. Their dinner plates and cinched paper towels rest on top of a cardboard box. On the street, a car tire brushes the rain and the sound rolls into the apartment, bumps the thickness of quiet against itself. With a few adjusted blinks, Harriet glances into the bedroom and makes out Jon’s shape on the air mattress. And as she rushes in, falls on him, she smiles but is painfully confused. He’s long and stubbornly bond beneath her. She doesn’t mind. He mutters, half-sleeping, and wrestles for space she won’t give. She can see in spite of the dark that his face isn’t scowling. The smell of cumin seems to pull him awake.

Jon asks, “Were you cooking?”

“I have something to tell you,” she says.

The old man is slow limping over the floorboards and against the bed and lifting the sheets to curl alongside them. They are not alarmed. They do not pull away.

James Flaherty's stories have appeared in H_NGM_N and Fiction at Work. He lives in Boston and reads for Electric Literature.