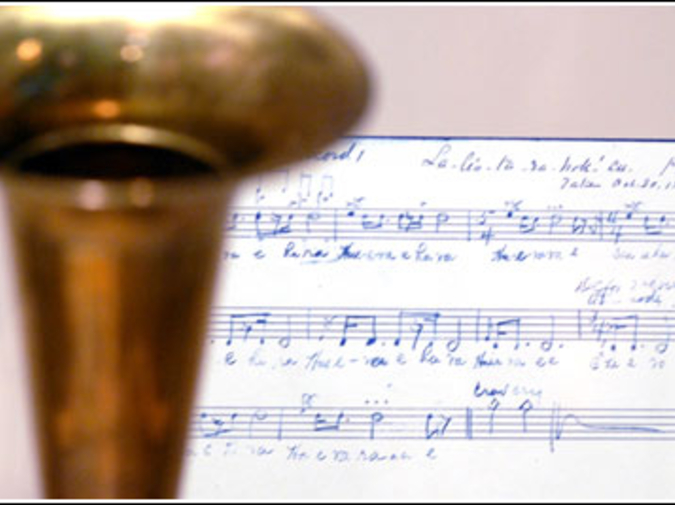 At nearly 2am, I took my trumpet down to the ocean, slung down against my leg like a weapon. I live across the street. A last minute decision leaves my drink on the stove. I only have so many hands.

The sand is wet, and I sink in with my K-Mart sandals. Winter is a ghost tonight, as temperatures are high, and November has nothing to say for itself.

At the mouth of the water I shriek out a few fast notes, quick jabs at the night. The ocean jabs back, and then roars. Soon, I realize I can’t keep up. I can’t play with the master.

There are soft padded noises – footsteps. Next, I feel a sharp pain against the back of my neck. I fall to one knee, but don’t go out. They try to take the horn, and then pull at my pockets.

I swing blindly with the horn, make vicious slashes at the air, before feeling something grab at my ankle. Teeth sink in at the bone. I feel nauseous. I fall to the sand. Fingers crawl across the back of my neck.

In the morning I examined the bite marks and determined they were human. I would most likely need a rabies shot.

The next night a friend and I went down there, to wait for them. He was angry, and paced. No one came around. We waited an hour. Finally, in the sand, he said, “My mother won’t talk to me. She told me to drop dead. It’s the alcohol. I told her I’m tired of pleasing everyone but myself.”

“Jane’s coming,” I said. “I couldn’t stop her.” The ocean made a thick sound, a clap of thunder, a book coming down heavy on a table, the thud and thump of one wave pounding down on top of another.

I considered changing the locks, or changing my name. I considered claiming I wasn’t me. Is it so implausible? Haven’t you ever woken up as someone else?

Then I remembered something a friend always said when he had to deal with his ex-wife, “Handle your business. Be a man.”

My friend mentioned Vietnam, about getting lost in the street markets, and even working in the rice fields for pennies. I told him they didn’t have pennies.

“They have rice fields, though, right?”

I said, “Yes. And Americans still in cages.”

At my job, there is a women there I despise. She walked up and felt my head. “There’s a bump,” she frowned.

Later when I wasn’t looking she tried to rub the side of her head against the side of mine. Jo Jo sidled up to me, the words drifting out of the side of her mouth like cartoon bubbles, “Guess who wants to get in your pants again?”

“Stop enjoying this,” I said morosely.

“I heard you play the trumpet,” another friend said, mocking me. Then, pretending to be this workplace admirer of mine, continued with, “Maybe we can get together. I’ve been known to play a pretty mean organ.”

My admirer shows up again, a button missing. She said, “I heard you take your trumpet down to the ocean at night. I heard you play it when no one’s around to listen.”

“Maybe I’m dumb,” she said, “but I could make us something to eat, and we could go down there together. You could play the trumpet, and then we could just sit there and listen to the sound the sun makes when it’s going down.”

Later, I remembered that was somebody else I was thinking of, and I felt bad.

My friend called from a pay phone. He was in jail again. He got drunk and broke into her house, to see his son.

The child wasn’t home, which made him frenzied. Contextually, the broken lamps and smashed-in television made sense.

In the morning I took the horn to a hock shop one town over. They would only give me a hundred and fifty for it. So, I sold my shoes, as well as the pants I had on. The belt buckle was a gift, and worth thirty dollars all by itself.

At the jailhouse, my friend was sober. His face hung through the bars. He was smoking a cigarette and talking to one of the guards.

The desk officer asked if I was his brother. I said, “Okay.”

On the car ride home we saw a dog with three legs, and then a man on crutches. They both stopped when the light turned green, and went along their way when it turned red again.

Joseph Musso, Jr. lives at the ocean, where the ragged meets the lovely. Recently, he has had stories appear in Chrysanthemum, Sleepingfish, and ken*again. His second book, I Was Never Cool, will be published in January 2007 by Gold Fish Press.