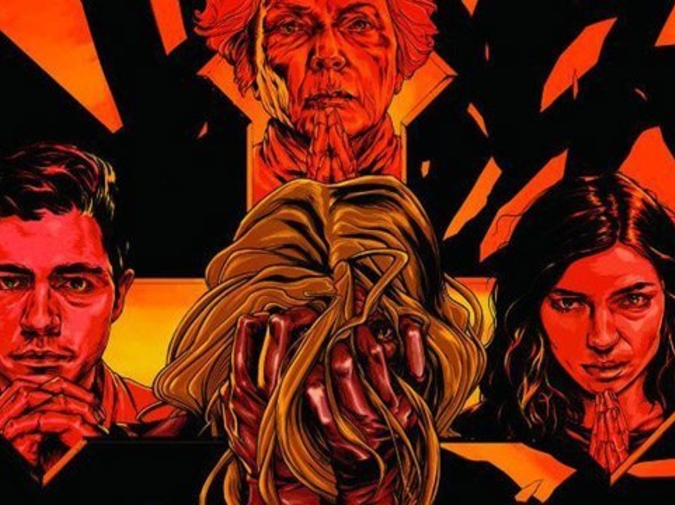 The first time I tried to see Trash Fire, the theater provided a false listing online. A fellow critic met me there and, caught off guard by this denial, we ventured into the surrounding woods, because that’s how far away I had to drive to suss out a viewing after my urgent mania for Trash Fire crested. Based on the brilliance of Excision, but infuriatingly influenced by the AV Club’s soy latte of a backhanded approval that felt designed to reverse promote the film only inside my brain with some Manchurian Candidate purse strike sublimation (gonna keep discussing that site’s recherché humanism until one of us fucks the other (copulation with the site itself) – no worries, the condom will be a baby lamb with beaucoup civil rights), I, at great personal risk (think I have a mole on my dick), slipped past the populace into a rural shit mall. Through the densifying sycamores (think my urethra is collapsing in on itself), a figure slighted our vision, posing like an aircraft marshaller. City bred, I intend to impinge on no one’s customs, from distant screams to a preschool on fire, none of my fucking business (in reality, bystander heroes get sued, and fuck their busybody pretentions anyway (well, if you’re raping some infant in front of me I guess I have a legal obligation to request you knock it off, instead of clapping, but that’s annoying)) unless it grabs me and I stab it in the cornea. All at once, the figure ascended a tree and began to chirp with, what one might describe as, filial tenacity. We began discussing The Mothman Prophecies, which I hadn’t seen in a while, to the sound of strips of molt plopping into the nearby bushes. Then a jet engine blast was laid over us, so we had to yell, but we were wondering if it’s socially acceptable to be into Looking for Mr. Goodbar now, not that the wholesale dancing plague for everything to be retroactively pious could change how amazing a film is (until they patent digital bleach to correct the classics). It’s the kind of world that makes you vomit well into sobriety. At least back then every hot male actor didn’t think he should direct. They knew they were flakes and that their art ends in their body and needs outside direction to be expelled. They shined when they played against their faces. Death felt more like a broken promise than something you merely accept in the moment. We had the aural impression we were in a thunderstorm, though there was no precipitation, and the empty flask became as vibrant as the insect-ridden animal corpse we chose to admire. When I trekked back alone, days later, a strange colored smoke rose from the distant tree line. I was once on a Greyhound bus through the interminable midland of this country for two days straight and I noticed the clouds at night became a flashing chromatic mask for what seemed like obscured artillery and no other rider bothered to mention this conspiracy aloud. Not unexpectedly, the theater was empty, except for a sole firefly, who picked a polite area beside the screen to pattern with its luminously winking asshole. The director of Trash Fire makes attractive people act with an art beyond themselves. It’s the kind of period you really have to savor in your mouth and it tastes so refined you remember that the world, on occasion, does pardon itself a couple hours at a time.