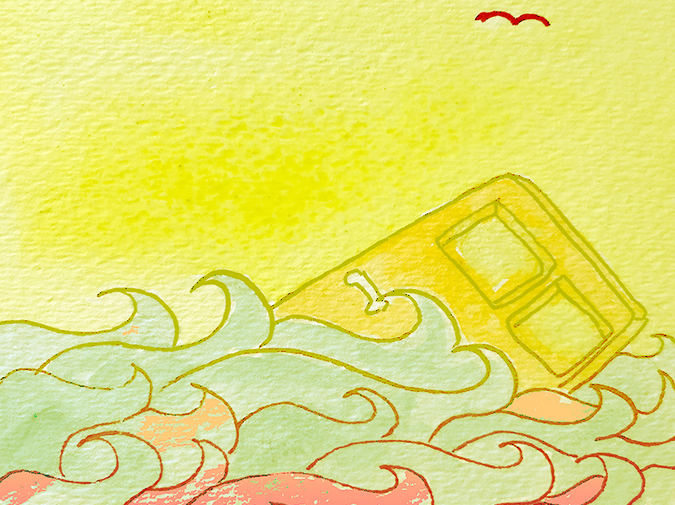 Yoda stared blankly through his foyer, past the part where his door would have been, and out into the front lawn, where three bogwings were staring at him. The morning had not gone how Yoda would have liked. His makeshift door had been pierced clean through by a bogwing beak, at which point the bogwing, now with its beak stuck in the door, panicked and flew away, door and all. It was finally able to shake the door off when it was over Lake Dagobah, and the door had plummeted into the bubbly depths of the lake, never to be used again.

That was about an hour ago.

“Hm,” Yoda grunted, considering the foyer, it’s openness, how exposed he was, and what he could do about it. “Hm,” he grunted again. He never knew that his novice woodworking abilities would so hinder his ability to have a happy retirement. He could use the force to get more bark, but wouldn’t the neighbors take that door and drop it into the lake as well? He needed to understand hinges and fasteners, and how to make them. And locks.

Back on Coruscant, Yoda had a helpful Wookie super named Harraffle who always helped change the lightbulbs. Yoda had vaulted ceilings, and as a matter of principle, a matter he still carried today, he didn’t much like using the force for household chores, but he also didn’t like ladders. His dislike of having other people in his apartment came in third compared to these other dislikes, and he resorted to getting help from Harraffle, who also happened to make a great hazelnut hot cocoa.

Harraffle was no longer here. But Yoda was a grown man, and a happy new home owner. No one had greater agency over his current situation than himself. He didn’t need the help of Wookies and Twi’leks to turn this crashed escape pod into a house into a home. And as he leaned on his stick, he was reminded of what his independence and ingenuity had already created. Now he would replicate this to create stability for his home.

He walked outside, ignoring the blathering bogwings and towards the trees. The bark on most of these trees were so moist that the bark came right off with a bit of peeling. It reminded him of when Ki-Adi-Mundi’s boulder-like head used to peel. Yoda used to dismiss him from the council chambers. It was gross.

He needed better wood for his door, just like Ki-Adi-Mundi needed a better moisturizer.

Deeper into the forest, Yoda found that the tree bark was more formidable. But being so tightly fastened to their trees, it proved obstinate. Yoda was only able to pry off inches of wood at a time, and that would never work. He had no way to piece all the crumbled bits back together again.

He looked at his hands. He could use the force. He could cut a perfect-sized wood chunk from this tree if he used the force, but he would be letting himself down. And what if the Sith felt this use of the force? Yoda would have sacrificed himself in the name of keeping his neighbors from lodging themselves in his foyer.

Yoda checked around him. No one was looking. Even the bogwings were more focused on the house than they were on him.

“Hmmmm,” Yoda grunted. He felt the force come to him like an eager, suckling Bantha, enveloping him in its power. He remembered then, the power that he carried. The power to stave off entire invasions. And now, he used it to carve the perfect rectangle out of the tree. The wood cracked and splintered, but stayed whole as it popped away from the tree for Yoda to catch. It was just as tall as he was, the perfect size to protect the sanctity of his own home. And if the Sith did come, well, they’d have trouble getting through this door too.

He anticipated the shame of using the force for household chores, but it never came. Perhaps it was due to the change in environment. Before, he had other options. He had Wookies. Now, he had nothing. It would be a waste of his retirement not to use everything at his disposal.

Yoda tucked it under his arm and leaned on his stick. What a collection this was. He smiled contentedly. Being alone in the untamed wilderness of a planet such as this had seemed daunting, but he had accomplished some remarkable feats in the hours that he had been here. He gazed longingly at the open door frame and pictured it being covered by the door he now held. It added more pace to his gait, and before long, he was setting it up like a palisade wall. From the outside, it felt daunting. He smacked the door several times with it stick and, other than the hollow thudding, it showed no give. He looked over his shoulder at the bogwings.

“Not good enough, your best will be,” he said.

Yoda slid the door to the side and slipped inside, replacing it as he did so. Immediately, his home felt transformed. Where once it had been an open-concept home, now it was dark, quiet, secluded. If he found curtains for the bay window, he could accomplish complete and total privacy. His own escape pod from the planet.