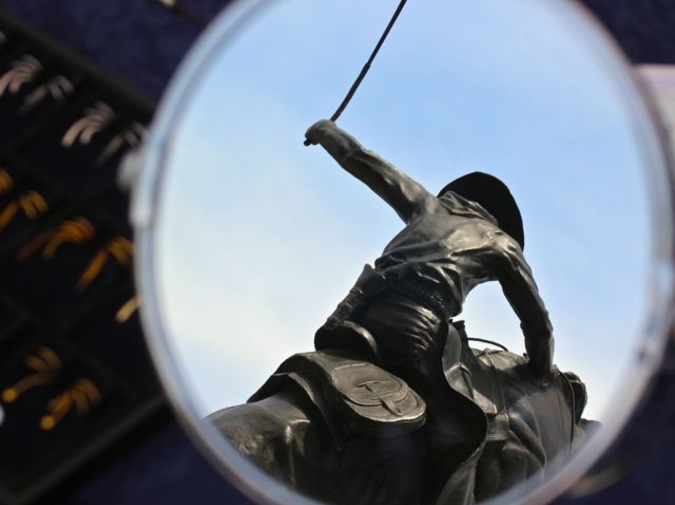 I saw myself on the Jumbotron. Locked eyes on my eyes looking elsewhere. It was that moment before you recognize that it is you, in fact, staring at you. Before you think, Look at that. That’s Me. That split second before you begin to wave and do not stop until the Jumbotron moves on. It was a lucky catch, that moment. And then I waved at the Jumbotron. I did not wave back.

So it was the opposite of when you see a stranger walking toward you in a hotel lobby. When you drift left to get out of her way. When you realize that it’s not a stranger. It’s a mirror. It is Me.

This other Me was taking longer than usual to recognize herself. The thing about the Jumbotron is it’s patient. And so am I. I stared at the Me not staring at me. No one else in the stadium seemed to be looking. It was just me. Me and the Jumbotron and this other Me.

My face hovered there, huge. The nose stretched longer than my nose. The lips, they thickened and paled. In short, time passed and the face stopped being mine.

So it was both like and unlike hearing the name of an old lover. How it lingers, enlarged, distorted. And you struggle to tie it down to any body you know.

A taxicab drove into her living room. There was a gaping hole where her wall had been with half of a taxicab still inside it, and she felt like hosting a party. She did not know why.

She’d make phone calls, she decided. She’d call all the people who could use a good party, even the ones she hadn’t spoken to in years. Each time she dialed a wrong number, she’d apologize and tell the stranger on the line that she was having a party. She’d stare at the taxi and invite the stranger. Yes, it’s tonight. Yes, please do try to stop by. This wouldn’t make her feel desperate. This would make her feel more resolved.

At the party store, the cashier would keep asking, Is there a theme for your party? What is your theme?

He’d empty her cart of yellow plates and black tablecloths. Yellow banners and black crepe paper. She’d guess what he was guessing her theme was. Bumblebees? Rotten bananas? Caution tape?

Back home, she’d tie balloons to the hood of the taxi and think of the taxi like a piece of furniture. Something large. Like the refrigerator. Something she would not attempt to move.

She’d decorate and keep on decorating. She could make a whole home for herself with crepe paper ceilings and bannered walls. When she finished, she could huddle inside her broken living room feeling downright festive and she could wait for her guests to arrive.

The policemen showed up first when it happened. Then the paramedics. The firemen last. Everyone wore the appropriate costume. The flashing lights made her feel like dancing. Her house had never been so full.

We play this age-old sport that’s kind of like fetch, except instead of a tennis ball, it is our guilt. Also, the goal of the game is that it won’t come back to you.

We aim for what has no defense.

There’s the weather, the moon phase, the messes that were made in the kitchen that no one bothered to clean.

There’s how our parents married on April Fools' Day. How that fact made even the good times seem ironic in retrospect. There’s how they separated on Father’s Day. How our father, when he left, left our gifts unopened behind.

For a while there was our mother and our father and we were happy and the game hadn’t started yet.

In the beginning, there was the dog for us to hate together. We had to feed it. And take it for walks. The dog would find whatever we threw in its direction. It would just come right back and let us throw it again.

In those years we could sleep soundly.

In those years there was a dog we could blame.

Rebekah Bergman's short stories have been published or are forthcoming in Joyland, The Nashville Review, Poor Claudia, Necessary Fiction, Everyday Genius, and other journals. She holds an MFA from The New School and is a contributing editor of NOON.