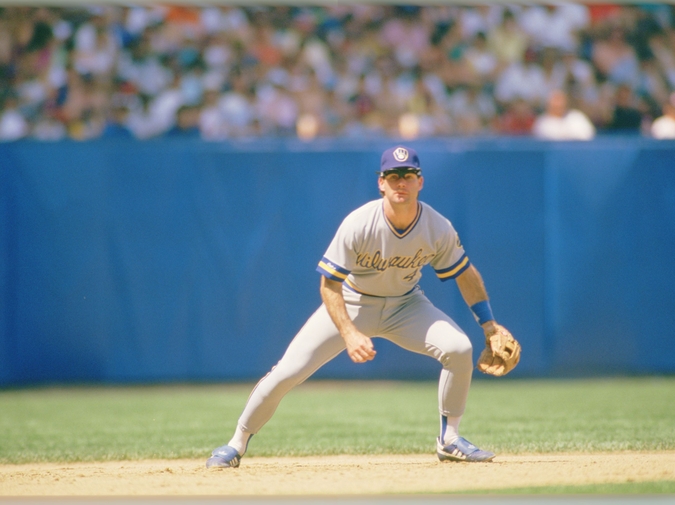 I didn’t become a fan of baseball until I was in my early twenties. As a teenager, I thought sports were antithetical to the sort of arty, book-reading persona that I had been trying so hard to affect. Also, my dad died when I was three, so the myriad neural pathways built on positive associations and warm memories of going to stadiums, tailgating, watching games on TV, playing catch, etc. that are present in the brains of so many other Americans, had yet to be formed in me.

But in my twenties something happened. Every decision I had made up until that point had lead me to a place that I didn’t really want to be. I had dropped out of college. I was working a shitty restaurant job. I was reckless and self-destructive. I lived in Milwaukee, which is the sort of place that sounds like a punchline to people who live on the coasts. And so when I found baseball—or rather when my friend/cousin/older-brother figure, Chris, started taking me to games—I internalized the symbols with zeal, so that my team, the Brewers, became an extension of myself and my city.

My family history with Milwaukee spans four generations. I used to feel nostalgic for a past version of the city, when it was known for its breweries and machine shops. It was an idea of how the city used to be that was most likely never a reality. It was the Milwaukee Laverne and Shirley lived in—the fictitious home of fictional characters. But still, in my imagination at least, the Rust Belt gleamed before it rusted.

When I started following baseball, the Brewers became an allegorical pars pro toto of my mythological Milwaukee—an idealized conception that America’s postindustrial middle, though in minor disrepair, was teeming with potential. No one represented potential more than Rickie Weeks.

Before playing in the Majors, Rickie won two straight Division I batting titles and finished his college career with a .473 batting average, the highest in NCAA history. The Brewers picked him second overall in the 2003 draft.

Then, for six years, nothing really happened. His numbers weren’t great. He was sent down to Triple-A on more than one occasion. He was tremendously prone to injury. 2009, for example, really seemed like it was going to be his year, but, after hitting five homers in April, he tore a muscle in his wrist and was out for the rest of the season. He reached a sort of peak in 2010, was voted on the All Star team in 2011, but then severely sprained his ankle, and his numbers never bounced back.

Baseball is notoriously hard to explain to people who didn’t grow up with it. This makes it basically unwatchable to most cultures outside of North America and Japan. So let’s say it’s an acquired taste. Let’s say it takes years to cultivate an appreciation for it. I think for these reasons, for a large number of American men, the understanding of and the ability to appreciate baseball is a sort of metric of adultness. And so baseball becomes bigger than baseball. It becomes Baseball.

To me, the Baseball I found in my twenties was the Brewers. The Brewers were Milwaukee. Milwaukee was me. My Baseball was the bleachers and parking lot of Miller Park. My Baseball was watching a ball soar weightless off Rickie’s bat, thinking, that is me, I am that.

Think about a dead person—someone you knew. Think about how when someone dies they become an idea, the sum of their memorable qualities, reinforced by a composite of anecdotes retold by the bereaved. Like a piece of writing revised and honed over time, a thing that begins as a representation of something else slowly takes on a life of its own, starts to inform and shape itself, becomes its own entity altogether. When my dad died, he left in his place a specter, an amalgamation of memories, the idea of a person. The idea of my father liked fishing and baseball and hockey. The idea of my father was known for being pensive and laid back. The idea of my father spent its time sitting in a canoe with a fishing pole at its lap, watching the thin wake of a submerged lure fan out on the glassy surface of a lake, as a fog rose around him, the cool air warming in the morning light.

When I was ten or eleven—eight or nine years after my dad’s transformation from real person to idea—I decided I wanted to play baseball. When I asked my step father if he could show me how to hit a baseball, he promised to have a friend of his teach me. Instead of a lesson, the three of us went to a Brewers game. When I asked his friend how to bat, he told me to watch Paul Molitor. I watched. He had a sort of pensive, laid back, wait-for-it stance. I liked it. I found something about Molitor’s demeanor familiar, but he didn’t get any hits that day, and when I asked again, my step father’s friend just told me to keep watching Paul Molitor.

At this point in time, sports had been largely absent from my life. So, when given this lazy, indifferent piece of advice, I took it to heart.

That summer, I watched the Brewers on TV, waiting for Paul Molitor to make it to the plate. I solicited information about him from cousins and uncles. I collected Paul Molitor baseball cards and studied them.

I didn’t learn how to hit a baseball. I didn’t learn to catch or throw. Instead, I learned that Paul Molitor had sad eyes. I learned that he had had a drug problem at one point. My own experiences with substances were still a few years off, but I knew a little about drugs. I knew that my father had smoked a lot of pot in the last years of his life to mitigate the effects of chemo. I knew that he had also smoked a lot of pot before his cancer diagnosis. My grandmother, just out of surgery, while she was loose-tongued from morphine, had said out of the blue, “He was no saint, you father. He did LSD. He got arrested in San Francisco once for having hashish in his glasses case.”

And so Paul Molitor—or least my idea of Paul Molitor—combined with the specter of my father. He stood with sad eyes. He waited for the pitch, patient and alone.

Now as an adult, after reading Rollie’s Wikipedia page, I’ve come to a similar conclusion. His biography is old-timey in the way that his moustache is old-timey. It feels disingenuous and canned. The details seem rendered in caricature. The anecdotes seem didactic or moralizing. His life seems to be made up of a series of fables and one-to-one allegories. It reads like the synopsis of a second-rate baseball biopic. This is why I felt slightly vindicated, then, to later read on his personal website that, since retiring from baseball, he has pursued a career as a public speaker, catering to corporate events, fundraisers, inspirational engagements, and the like. This is to say that Rollie’s Wikipedia page is bullshit, insofar as anything performed over and over, honed and revised, becomes its own sort of machine, designed to precipitate effect—an effect not unlike catharsis—independent from the actual reality that inspired it.

For a piece of writing under 2,000 words, I certainly spent a lot of time shaping this essay. I’ve moved things around, cut things, added things, all to service some sort meaning, some kind of effect. But what am I even looking for? Catharsis? Maybe. I write. I delete. I google Rollie Fingers. I google Paul Molitor and Rickie Weeks. I rewrite. I redelete. I find an article in The Seattle Times from February 25, 2015, titled “Mariners’ Rickie Weeks has new look to go with new role.” It’s about how Rickie cut off the dreadlocks he had been growing since 2008 after he arrived in Seattle in 2015. The article wants to connect two dots that can’t be connected. Sometimes a haircut is just a haircut. In the article, when asked why he cut his hair, Rickie responds, “No reason.”

And now I find myself in the same position, trying to connect two dots that can’t be connected. I also left Milwaukee. I also moved to Washington. But the similarities end there. I came out here to start my career, Rickie came out here to finish his. To be honest, my interest in baseball waned when I couldn’t watch the Brewers on basic cable or listen to Bob Uecker call the games on the radio. But here I am now, thinking about baseball. Here I am reading an article about Rickie Weeks, ten years after I first watched him play. Here I am looking forward to a new season, looking forward to watching a new team. Here I am waiting for Rickie to get to the plate. Here I am waiting to see what happens.

Tyler Koshakow’s most recent stories and essays have appeared in or are forthcoming from The Rumpus, Big Lucks, and NANO Fiction. His favorite defunct baseball team is the Seattle Pilots. More at tylerkoshakow.com and on twitter @tylerkoshakow.