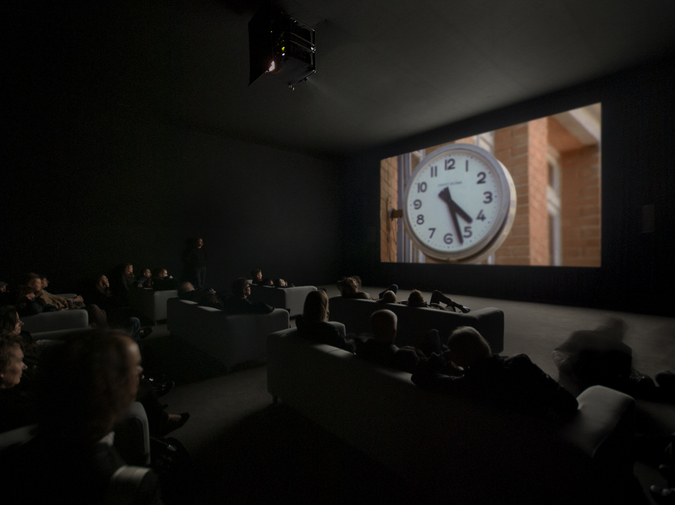 While a good portion of her book The Folded Clock takes place in New York, where she lives, Heidi Julavits actually sees Christian Marclay’s The Clock on a trip to Los Angeles. In July 2011, the film is touring Los Angeles and Julavits is in her early forties. This is how she describes The Clock: “The Clock — some call it an art installation — is also a twenty-four-hour long movie that’s a fully functional (and visual) timepiece. Every minute of a twenty-four-hour day is accounted for by a preexisting film clip, in which a clock or a watch appears…”

Julavits goes to see The Clock at the end of a great weekend spent with a close friend that she rarely sees in person. They decide to stop at the Los Angeles County Museum of Art before parting ways at the airport. Julavits is very conscious of time on the way there, knowing that they don’t have much time to see The Clock before her friend’s flight back to London, and also that once her friend leaves, she will probably not see her for another six months or a year.

Despite the similarities in their titles, The Folded Clock is not a reference to Marclay’s film, it refers to something Julavits’ daughter says in another part of the book, but still the association cannot be avoided. The book is a diary, an account of two years in Julavits’ life, but to protect people’s privacy, she has “altered identifying characteristics”, which sounds ambiguous. What does she consider an identifying characteristic? Does her friend actually live in London or somewhere else entirely? Who honestly cares about altering identifying characteristics? People always think they recognize themselves either way. She describes the friend as looking darkly elfin and androgynous, but maybe that’s not what she looks like at all. Maybe they aren’t even close friends. It’s possible they never even saw The Clock together.

Julavits and her friend encounter a long ticket line for The Clock, then somehow find another “not-so-terribly-long line”, and sit together on a couch watching the 3pm to 4pm hour of the film. They plan to leave at 3:45, but stay until 3:58, partially because they want to watch more of the movie, and partially because leaving The Clock means they’re one step closer to having to say goodbye at the airport.

The narrator of Ben Lerner’s 10:04 goes to see The Clock at Lincoln Center in New York. The Clock was at Lincoln Center from July 13, 2012 to August 1, 2012, but in the book’s acknowledgements, Lerner explains that time in the novel does not always correspond to time in the world. This creates a sort of magical New York where Occupy Wall Street, The Clock, and Hurricane Irene can all be happening practically at the same time.

The narrator of 10:04, who is not exactly Ben Lerner, but is sort of Ben Lerner, is in his early thirties when he goes to see The Clock with his friend Alex. They find the line to be relatively short. Previously, they had abandoned the line twice after discovering the wait time to be over two hours. This is how Lerner describes The Clock: “The Clock is a clock: it’s a twenty-four-hour montage of thousands of scenes from movies and a few from TV edited together so as to be shown in real time; each indicates the time with a shot of a timepiece or its mention in dialogue; time in and outside of the film is synchronized.” The title of the book, 10:04, refers to a minute the narrator had hoped to see occur in the film. At 10:04pm, lightning strikes a clock tower and sends Marty McFly Back to the Future.

But Alex was unavailable to meet up at that time, so they actually find their seats at 11:37pm, before the film’s big midnight climax. In the book’s acknowledgements, Lerner also confesses that he never actually had the chance to see The Clock reach midnight, he borrowed details from Daniel Zalewski’s profile on Christian Marclay in The New Yorker. This seems like a funny detail to confess to making up, given that he later said in an interview in The Believer that the Alex character is not based on a single real person, but maybe he just wanted to credit Zalewski’s piece as a source.

After midnight, the narrator and Alex stay at The Clock for three more hours. At some point, Alex drifts off to sleep. He feels ridiculous when he looks away from the movie to check the time on his phone, since he is watching the ultimate clock. Yet in doing this, he also becomes determined to write more fiction. The film has made him excited by how many possibilities there are for different days in one day. Yes, people do so many of the same things at the same hours, but those similar actions can happen in an infinite amount of different worlds. He starts outlining a new story in a notebook as he sits in the theatre, fictionalizing events in his life for a story, even though the self we’re currently reading about might already be a fictionalized version of the real Ben Lerner, who really did publish the story in The New Yorker that his narrator begins to outline at The Clock.

While I could have sworn getting drunk to visit The Clock was accidental, past emails reveal that was always my intention. I sent an email to my friend Tim asking if he’d like to join me and our other friend Lois in pre-gaming The Clock at my favorite Brooklyn bar Alaska and then heading to MoMA around midnight. This was planned for the night of January 18, 2013 into the 19th. I was in my mid-twenties.

When you pre-game anything, you often never make it to the thing you were pre-gaming for, or at the very least, arrive later than intended. We were headed to MoMA later than midnight, which is why I was frustrated when my MetroCard wouldn’t swipe through the turnstile. I was also drunker than I intended to be, which is why when Lois said to just swipe through with her, I readily agreed, even though 50% of the time there are cops hiding around the corner waiting for such illegal transactions to occur, and sure enough, there were two officers waiting for us as soon as we double swiped through. If we were in The Clock, our subway offense would smoothly transition to Griffin Dunne in After Hours jumping over the turnstile, only to meet a cop and jump back in the same direction, except I don’t think either Griffin Dunne or Lois and I looked at a clock during any of it.

After Lois and I were stopped by the police, Tim wisely walked past like he and his law-abiding MetroCard had no idea who the fuck we were. While we were being detained, he waited for us at the bottom of the stairs, singing the opening chain gang song from Les Misérables.

Ever the martyr, I told the cops it wasn’t Lois’ fault at all and that any and all fines or tickets should be bestowed on me. That’s exactly what happened and we stood there for another thirty minutes while they checked our records, wrote me a ticket, and Tim sang, “Look down, look down, there’s twenty years to go.”

Finally we were freed and got on a Manhattan-bound train to MoMA. During the ride, I ranted about the cops, while also praising them for kindly underestimating my weight by a full ten pounds on the ticket. Eventually we got to MoMA. Since it was now about 2:30am, nearly two hours after we had planned to get there, we were certain that the line would be manageable, but were surprised to learn that even at these odd hours the line was still over a two hour wait.

Luckily there was a charming Midtown Irish bar across the street where we could kill more time. We drank until it closed at 4am, and then got in the MoMA line, which was still long enough that we found the idea of standing or even sitting in it exhausting. I thought it would be funny to lie face down. Lois lay down too, as did Tim, though whenever the line moved, he had enough energy to stand up, grab my arm and drag me lying facedown across the floor, while screaming, “Kristen!!!! Do it for art! Do it for art!”

Somehow our fellow line waiters and the MoMA employees didn’t find us totally obnoxious. A few even took pictures of our antics. We also spent time bonding with some cute Texan tourists and gave them insider knowledge on the popular brunch spot Five Leaves. It was great, we said, but you had to go early, so early in fact, that if we ever all got into The Clock, they should probably just not sleep and go directly there from MoMA.

Eventually we did make it to The Clock and settled in on the couches during the strange hour shortly before 5am. I’d also read The New Yorker Christian Marclay profile and in it, he said this was the toughest hour to find time stamped clips. Marclay says, “You have to imagine that, if you’ve been up watching and it’s 5am, you’re in a weird state of mind.” It’s the only part where Marclay cheats a little, filling the gaps with clips of surreal dream sequences and people tossing and turning in bed.

I don’t remember this, because, as you might predict from the night’s adventures, all three of us promptly fell asleep soon after sitting on the couch. I think after realizing that we’d all passed out, we decided to get up and make the trek back to our own beds to sleep. We probably didn’t stay more than an hour at The Clock. But I wish we’d stayed. I wish we’d all fallen asleep, preferably on each other’s shoulders, and then a few hours later, woke up together with the history of cinema.

Kristen Felicetti is the editor of The Bushwick Review. kristenfelicetti.com