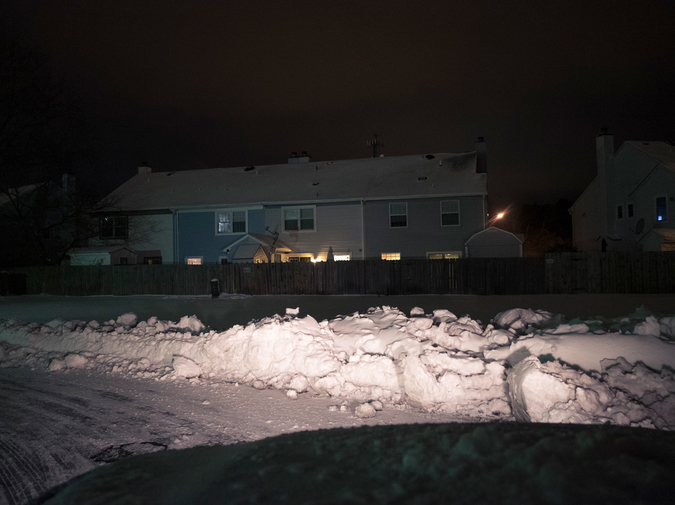 Taylor was driving in for the night shift, the storm just tailing off, when his headlights fell upon the snow wall. It was four feet high and spanned the width of a suburban street.

Watching from the wings would be its makers, boys crouched in bushes or spying from bedrooms, boys fiddling with radios until Jim Morrison whispered clearly: We shall go on playing, or find a new town. Or it would be girls—girls in coats puffy and purple, their lips the gentle blue of exposure. Girls tucked in close behind the wall, clutching snowballs until their fists turned them to diamond, until they could only dazzle, or destroy.

There were no ways around. There was reverse, but that was its own failure.

The snow wall was the sort of monument he and his crew would have built as kids. To tease drivers, to lure out their worst urges. At the bus stop before school they used to put treasures out for the city bus to flatten—juice boxes, jelly donuts. There was a driver who got off on it. By year’s end year the sum of their offerings had congealed into a fresh piece of tarmac atop the roadway. Apparently all you needed to make new road was enough of anything in quantity, expose it to heat and cold and darkness and light and fleeting, tremendous pressure. Conveniently, the same recipe would make a man.

Taylor let the truck idle in that snow globe scene—the porch lights in their frosted glass, marshmallowed awnings, every edge blunted. If he drove the suburban labyrinth long enough he would inevitably come to a place where the high beams would flare and mirror back at him, where the truck’s bumper would tink against reinforced glass.

This wall is here for you to break it, he thought.

A wall kept out conquerors. But also, it dared them. Like all traps, it contained an invitation.

Taylor would have preferred to stay on the wall’s far side forever, defending that realm’s impossible structures, passageways that led only inward, downward, like the spiraled surface of a shell. If there was a boy opposite the wall, Taylor knew him. He was scrawny and shy and waiting desperately for this: for ramparts to buckle and tires to climb the wreckage, for headlights to tear a hole in the dark.

Greg Tebbano is employed as a grocery worker and, occasionally, as an artist. His fiction has appeared in Contrary Magazine, Jet Fuel Review, the Molotov Cocktail and FRiGG. He lives in upstate New York.