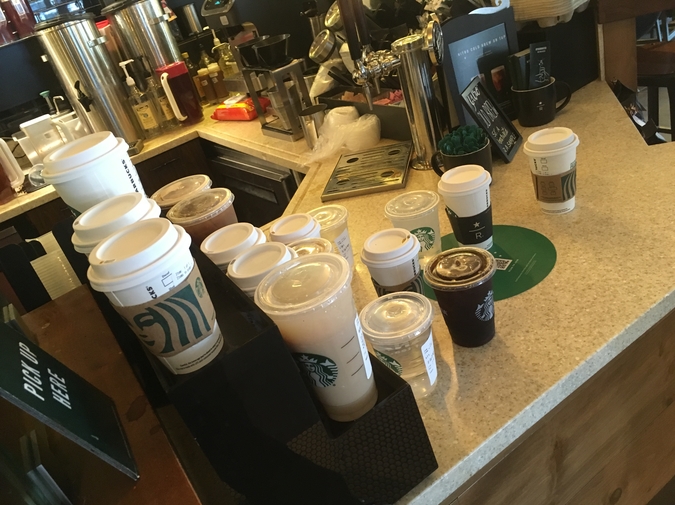 I was at a seminar about applying your strengths in the workplace. The seminar was in the dining room at a Days Inn. The room was set up for a continental breakfast. On a cart were glossy muffins and little boxes of cereal. That food was not for us, they had announced when we arrived. There were ten tables and stacks of handouts at the center of each table. Printed on the handouts, a list. Words like: Humility, Virtuosity, Resoluteness. Opposite each word was a corresponding box to check off. There was a podium at the front of the room with a silver bell on it, like you’d find at the register in a grocery store.

I think these seminars are a waste of time. At the very least, I considered, trying to be optimistic, I might learn something about myself. You get to an age where learning things about yourself becomes scary. It usually means you’re learning something you don’t like about yourself. For example: I always make too much food and throw most of it out; I never close a drawer all the way because I don’t like to hear it slam; I forget to put on sunscreen.

The attendees were other people like me—people desperate to know if they were courageous, if they could raise the bar, if they could contribute to the success of their teams, if they were born leaders or followers. Everyone was wearing a cardigan. Each had affixed his or her name tag to their breast and had written a name in a legible hand. The women shared a common hairstyle; the men too. What set us apart from one another was whether the business cards in our pockets, which we would pass out later, were glossy or matte.

The speaker stood at the back of the room looking at an image of herself projected on the wall at the front of the room. She didn’t acknowledge anyone who approached her, and several tried. One man in a red cardigan even waved his hand in front of her face. She stood with her hands clasped behind her, her chin jutting out. It was like she was in a trance, mesmerized by her own visage.

At 8:00 on the dot, she spoke. “One of my strengths is that I’m punctual.” People flipped open their journals and started to write. I didn’t know what they could possibly be writing. In my journal I wrote, One of her strengths is that she’s punctual. The speaker scanned the room through slitted eyes. “I have acute foresight. I can see way, way into the future. Seeing things that others can’t. Foresight—that’s one of my strengths.”

“I am patient,” she said, “to a fault. I want to hear from you. What do you think are your strengths?”

“My strength is that I speak clearly and confidently on the phone. People are always saying how I helped them and how I made everything so easy to understand.” We clapped for her.

“When you’re talking on the phone, speak softly,” the speaker said above the applause. “People listen more closely when they’re trying to understand what you’re saying. Someone else.”

“I’m a people person,” said a man in a black cardigan.

The man in the black cardigan shook his head.

“Our strengths have highs and lows,” the speaker said. “I call them peaks and trenches. Someone who is an includer type invites people in, makes them feel welcome, engages them. Those are his peaks. That same person can be generous to a fault and a bad decision-maker. Those are his trenches.”

“No,” the speaker answered. She started to pace the room. “It’s two sides of the same coin. Good and evil are not the same things as best and worst. Stress has nothing to do with it.”

“Stress,” said another woman, who was rail thin and wearing a purple cardigan, “stress leads to depression. When you’re depressed, you feel like you don’t have any strengths at all. You’re worthless.” She covered her face.

“Nobody comfort her,” said the speaker. “You,” she said, pointing at me. “What’s your strength?”

“I was hoping you could tell me.” People laughed.

“That’s it,” she said. “Your strength is Hopefulness. You keep hope alive.” The woman in the purple cardigan cried.

“What’s the other side? The other part?” I asked.

“What if I feel hopeless?”

“Someone else,” she said.

“What if I feel hopeless?” I said again.

“Someone else,” she said.

“We want you to answer his question,” the others said.

The speaker went to the podium and put her hand over the silver bell. We were silent. Her hand hovered over the bell. “This is how much power I have over all of you,” she said. “I only have to put my hand over this bell and you all shut up. Power is one of my strengths.” So that’s what the bell is for, I thought. She rested her hand on the podium. “There aren’t two people in this room who have the same five strengths. Hopefulness, Courageousness, Faithfulness. You’re all unique. Is that what you want to hear? It’s true. There are thirty-five strengths outlined in my program, a full evaluation of your strengths costs only $95.99, a great deal. There are nearly endless combinations. If you work for the public school system you get a discount, but none of that will matter if you don’t embrace the duality of your human experience.” She turned, again, to me.

“You want me to tell you what to do when you feel hopeless? Call on one of your other strengths. Resilience, confidence, decisiveness. When hope is gone there are other things, aren’t there?” We considered that collectively.

The seminar went on and we became subdued. We realized that this seminar, like other things in life, was just another way to make us feel like we all were a part of something bigger than ourselves. The speaker didn’t seem to like that notion. I think she wanted no part in giving us any peace of mind. In that way maybe she was making us stronger.

She divided us into groups to perform team-building exercises. In our groups, we exchanged business cards. I walked away with three glossy business cards and two matte business cards. It seemed she had made up a few of the exercises on the spot. She had us trade cardigans. She said it was an exercise in empathy. The woman in the purple cardigan traded with the man in the brown cardigan. It sagged off of her tiny body and enveloped her like she was a child playing dress up in her father’s clothes. Before the seminar was over, the speaker instructed us to take the list of strengths, which were still stacked in the center of the table, and go out into the world and ask a stranger to do an assessment of our strengths. “It won’t work unless a stranger does it,” she said. Then she passed out order forms and encouraged us to buy a copy of her program. She stood at the door and as we left she shook our hands.

I folded the list and put it in my pocket. I left the seminar and had lunch at a place down the street where I sat at the bar and ordered a California Reuben. After a while, I took the list out and smoothed it against the bar. I pored over the list. I tried to look at each word on the list as if it might surprise me, as if I would see something there that wasn’t there before. I looked for new words, new meaning, but if there was any new meaning, it was obscured from me.

“What’s that?” asked the bartender—a ponytailed woman in her thirties.

I decided to make something up, the way I imagined the speaker approached every conversation she had.

“It’s a list—” I said, “—a list of the words that will be on my son’s spelling test at the end of the week. It decides if he’ll move on to the fifth grade.” She took the list and looked at it.

“These are good words. How old is he?”

We went on like that until the bartender had correctly spelled each word on the list, all thirty-five words as if she was helping me prepare to test my son. And it did help. “He’ll do fine,” said the bartender. “It’s been so slow here lately.”

When my son comes home from school on the day of his test I will ask him if he passed the fourth grade and he’ll say, Yes, Daddy. Yes, I passed the fourth grade because you gave me hope. He will go on hoping in that beautiful way that young people do, as if the world is his father’s shirt and he will grow into it someday and be a man.

Then, when he’s in high school he’ll meet the guy of his dreams, the dreamboat on the tennis team, whose family owns the town, and my son will ask him to the dance, and the dreamboat tennis player will say that he thinks my son is really cool, very cool, but he doesn’t like him like that, and he already has a date, and they could all go together. My son will come home with his heart broken. And I will have to live with that, the knowledge that it was I who made him hope.

Oh, what a terrible thing it is to learn new things about yourself.

Jacob Guajardo lives and writes in Grand Rapids, Michigan. His work has appeared in Hobart, Necessary Fiction, Passages North, Midwestern Gothic, and other very fine literary magazines. His story "What Got Into Us" was featured in the Best American Short Stories 2018 anthology. You can ask Jacob about his obsession with the American rock band Evanescence on Twitter. He's @mrsaintjacob.