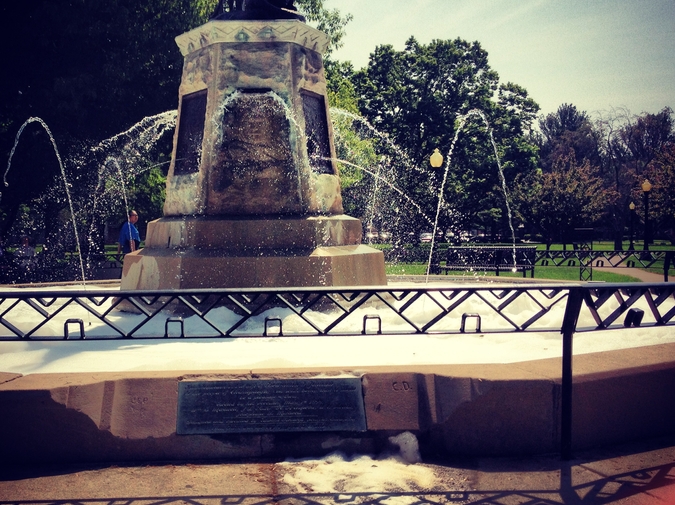 At nearly two in the morning, in the room across the hall from where his wife slept, Geoff Devine was awake, gazing down at the above ground pool in the backyard. Though he couldn’t see it, he knew that within the giant wooden drum, the murky water reflected the light of the moon.

In the three weeks that he and his wife had lived in the neighborhood, Devine had noticed that several houses on the street had installed similar pools in their backyard. Though he couldn’t for the life of him see why. The pool had actually been the main reason they had almost not bought the house from the start. Something about its presence had rubbed Devine in a bad way. But the price was right, and his wife, who possessed an infinitely sunnier disposition than Devine, persuaded him that the pool could even be fun.

Some fun. It turned out that the previous owners hadn’t cleaned the water in two years, so that a thick layer of sediment floated along the surface, rendering the pool completely unusable. It was unknowable how much sludge clung to the bottom.

Devine watched the pool for another moment, before crossing the hall to where his wife slept. He climbed into bed, looked at his wife who was sleeping in a fetal curve towards the wall, before lying back on the pillows. In the darkness, he tried to banish the image of the pool from his mind.

Most of the next day, Devine spent within the walls of Memorial Hospital, where he had just begun his first year as a radiology resident. The schedule was grueling. He arrived at 5:30. By 11:30, he found himself sitting alone in the hospital cafeteria, stirring a plastic cup of rice pudding, when his wife called. She was at a store called the Pool King.

“They say I should buy 10 gallon jugs of chlorine, based on the pH measurements I gave them from the pool water. Do you think that’s ok?”

Devine looked at the remnants of the two-egg omelet. He didn’t know anything about pools. He had grown up in Brooklyn, where he and his parents had lived in an apartment in Brooklyn Heights. Last year, he had been a fourth year medical student on the Upper East Side. All of this was new to him, home ownership, the suburbs, even his union to his wife was only 1 year old. In three weeks, he would turn 32.

“They say this amount will do the trick. We’ll be able to swim in it again. Isn’t that great?”

Devine imagined his wife, bending over the pool, dumping the chemicals in, and then somehow underneath the clear June sky, the fetid water burbling up towards her face.

After he hung up, Devine sat quietly, listening to the PA page a doctor whose name he recognized, a man he had met once but could only place by his stylish metallic glasses frames.

He looked at his omelet, and realized that his appetite had left him.

For dinner, Devine and his wife ate lamb chops, his favorite. But he couldn’t quite get hungry enough. He picked at them. His wife talked about the pool.

“All that chlorine didn’t make a dent,” his wife said. “I’m going back to the store tomorrow, see what they say. What do you think?”

Later, Devine climbed up on the pool deck and studied the water. Floating near the surface was a candy bar wrapper that was too damaged to identify the brand. He reached over to pick it out, but half way he stopped himself. He realized he was afraid.

The wind had picked up, and the trees in the yard rustled. He stood completely still and watched the branches sway. Ever since they had moved, he had imagined the dirty water bubbling up, as if it were alive. He didn’t know where the fear had come from. He had never felt anything like it.

Two yards over, he noticed an above ground pool, one with a halogen light shining on it. Kids were playing in it. He could hear them splashing. One of the kids screamed loud enough to make Devine flinch, but it was followed by a bout of girlish laughter.

Devine climbed down from the pool and walked towards his house, watching his wife as she sat at the table, writing in her notebook what he knew was her grocery list for tomorrow. She wore a tank top, and her arms were tanned a deep brown all the way up to her shoulders.

“I saw you on the pool deck,” she said, after he had shut the screen door. “If you don’t want the pool, we could always take it down.”

Devine hated it when his wife presumed to know what he was thinking, especially when she was right. “I do want the pool,” he said. “I can’t wait to swim.”

They moved into what his wife had dubbed, “the family room.” His wife opened a book, and Devine picked up a current events magazine and sprawled out on the couch. A minute or two later, he fell asleep.

Saturday was Devine’s day off, his only day off. His goal was to sleep late and mow the lawn. He had found an electric mower in the shed when they first moved in. The previous owners must have left it behind. The shed was next to the pool, and as Devine wheeled the mower past the pool, he felt anger rise in him at the sight of the pool’s wooden slats. Last night, he had trouble sleeping again. When he woke in the middle of the night, his wife had already gone upstairs and he had been so disoriented that he had knocked over a ceramic light. The light had smashed into a dozen pieces, and the sound of it breaking had rung in his ears hours later, while he lay in bed.

He tried to push that from his mind. It was a summer day, with the sky clear, except for a few slow moving cumulus clouds. His neighbors were out as well, these people who he didn’t know, but now somehow belonged to. He watched the people across the street load their kids into a large black SUV, and reverse out of the driveway, as if they were in a hurry to get away from their house. A couple times, two young girls rode by his house on matching pink bikes with banana seats, and pom-poms blowing from their handlebars. One time he waved at them, but they either didn’t see him or didn’t think they should wave back.

His mind began to clear. He hadn’t felt this good in weeks. He was getting hot too, pushing the mower. Sweat dripped down his sideburns from underneath his ball cap. He would have liked to go inside for a glass of lemonade, but he wanted to finish the front.

He pushed the mower harder, but he began to wonder where his wife was. He hadn’t seen her come out all morning. That was unlike her. Usually she would bring him a drink, if he was working like this. He thought she might be adding more chlorine to the pool, which was not a pleasant thought. There had been three more containers of it, and she might have decided to go ahead and add it without him.

Devine stopped the mower and listened to the morning for some sound, he didn’t know what. In front of the house, only one girl rode by on her banana seat. The other had disappeared. He watched the girl’s long ponytail trailing behind her. Suddenly she turned around, making a wide arching turn in the middle of the road, and pedaled back in the direction she had come. Devine listened to the bike making the chinking sound of a loose screw in the wheelbase, but there was no sound of his wife.

Something about the morning reminded Devine of a summer day, years ago, when he was a kid. He had gone with his mother to visit his grandparents in New Jersey. His grandfather was old, and walked with a cane. A stroke had damaged his left leg, and he dragged it behind him. He wore a special shoe that was thicker than a normal shoe. It was all worn down, and scuffed up.

His grandfather had taken him down the driveway, to show him his prized antique Chevy, which he kept in the garage. It was hot and muggy, a slow walking day. They had made it half way down the driveway before his grandfather collapsed. The cane had flown from his hands, and Devine could still remember the one-two sound it made as it struck the black top. His grandfather, who had suffered another stroke, would live for two more weeks before he died in a hospital bed.

Devine wiped the sweat from his forehead, and tried to remember something more about that day. What was going through his young kid’s mind, for example? But he couldn’t remember anything, or at least not much. There was no sound after his grandfather hit the ground, or at least he didn’t think there was.

Devine put the lawnmower down. He figured he’d finish the lawn later. It was too hot now anyway.

He made his way around the back of the house, listening for some sound of his wife, which there was none. He didn’t see her on the pool deck. There was actually no sign of her, at all. But he did notice that the gate leading to the stairs of the pool had been left open. The sight of the opened gate quickened his pulse, and he began to run.

On the pool deck, he found two fresh containers of chlorine, empty and discarded in the corner. The third was full of liquid, and the cap hadn’t been cracked. The container was pushed nearly to the edge. Devine leaned over the container, and without touching it, peered into the water.

David Englander's fiction has appeared in Guernica. He's a graduate of Columbia University's School of the Arts, and lives in New York City, where he works as a journalist.