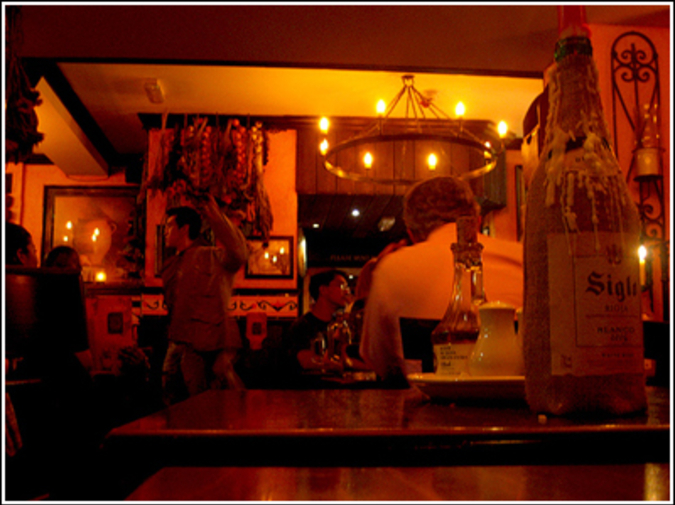 So, my step-sister Alice. She divorces her husband of ten years. Bart. High school sweethearts. Sad, sad, sad. Claims he beat her. Wins 75% in court. Unheard of, her lawyer says. But abuse factored in. So she said. I don't know what to believe, but I don't believe her. Bart was a good guy. He moves out to Lexington, Kentucky to start all over. Wants to live out in the hills, somewhere he can find himself again. Don't blame him one bit. Would do the same if I was him. I still call him. Don't ask him about the beatings, but if I did I would trust his answer.

Alice says she wants to meet a sensitive man. An artist. A teacher. A dancer. An editor. A musician. Something of this ilk. I try to tell her that a job doesn't make a man sensitive. May make him gay, but it won't make him better than Bart. I tell her she's restless. She tells me where to go. She wants to wear the pants. Big time. Funny thing is she's 5'1" and one hundred pounds, little candy corn teeth. But she's got lip. She's got sass. And a temper. She always had.

Five weeks after the divorce, Alice meets this pastry chef, Seth. She's in her stilettos on some fashionable street when this Seth makes a pass at her. He's talk, strapping, charming. She calls me up to tell me. Makes him sound like God's gift to women. Tells me on their first date the guy sat her down with a glass of Glenturret, played Lester Young on the stereo, and made her goat cheese popovers, marmalade croissants, and bannocks. Said she just about came right there at his breakfast bar. Next time they are into each other hot and heavy.

"He's a pastry chef," Alice says. "What more could I ask for? He works at one of the fanciest restaurants in town. I'm talking five star. I mean, there are only two five star restaurants in the entire state, and he's the pastry chef at one of them. It's like dating a professional athlete, you know. He's the cream of the crop. I'm like his groupie, and I don't even mind. He is such a sweetheart."

I told her this is all well and good, but what is he like? Does Seth seem like a good person? Does he seem like the kind of guy she wants to settle down with? Does he seem like someone she can trust? If he has one groupie, who's to say he doesn't have more?

"Jesus, Meredith," she says. "Don't be so traditional. You're not listening. He's making me chocolate éclairs next week. I love watching him finger the dough."

So Alice dresses up in all black. Heals. Pearls. The work. Takes her to the finest Turkish restaurant in town, then back to his place for éclairs and more. They make passionate love. He tells her he loves her, that he wants to father her children. She's swept away. It's the greatest night of her life. Fine.

Six months later she's getting hitched to Seth. Alice moves into Seth's 5,000 square feet spread. My husband Gary and I go to the wedding, but we don't have to agree with the course of events. With the violent pace. I shake Seth's hand. He winks at me. Reminds me of one of those dolls. His eyes look like they are made of glass. Who does this guy think he is? My husband winces.

He doesn't want kids, and Alice is fine with this, since she's thirty four already. Doesn't want to push it. It's enough to have Kenny from her ex, she says. I wonder if she has sour grapes. Everybody knows second marriages need that glue. Custody isn't enough. What does Seth care about that?

Two months after the wedding Alice sends me an invite to come over for tea with her and Seth. Says "P.S. — The Pastry Chef will, of course, give us something to munch upon. Apricot scones, if we're lucky!" I go, sans Gary. Most guys couldn't give a shit about tea. Especially second rate accountants. And when we were married I thought accountants were first cousins to lawyers. Gary would rather scratch his jock strap, watch golf. Or play golf. This is his life. Our marriage is about a dimpled white ball. "Life is a game," he once said. Considers that depth. Some motto. I'm just a piece of furniture.

Alice lets me in. Figured I should bring something light, so I brought a can of Del Monte pineapple. Alice thanked me, shoved it in the pantry. Didn't appreciate this one bit, but I thought it was a nice gesture. Gary doesn't make that much money after all. He's not a pastry chef. Can't even reheat Kraft mac and cheese to save his life.

So I'm over there at Alice's 5,000 square footage, in the sun room drinking chamomile and gnawing on an admittedly delicious scone — black currant (though Seth has a spread of five choices). Seth holds Alice's face in his hands. Kisses the tip of her nose. She beams. They show me pictures from their three week honeymoon in New Zealand. Nauseating.

When Alice is in the can Seth winks at me again. Want to ask him about that, but don't. Want to scratch the surface of this guy, but find a way to hold back. This is about being an adult, sharing my happiness for their union.

"I'm very happy for both of you," I say. I pinch the corners of my mouth, like they taught me to do during school pictures.

"Are you?" Seth says. He sips his tea. I clap my mouth. I'm not saying another word. I let the silence seep in. "I'm glad to hear that," he says, and half-winks to end the exchange. He asks me if I want another scone. That's a dig. I look at the tray of perfection. Listen to Alice clink in the kitchen. Think about knocking it onto the floor, watch the pastry chef on all fours, dusting off his creations. Then I realize they probably have a maid on call.

Alice stands at the doorway with a glass of seltzer. Lemon floating in the ice. The sun emerges from behind a cloud, unleashing light upon us. The angle is revealing. In the sun I can see blemishes on Alice's nose, on Seth's forehead. A pimple. A small ugly white scar. This is enough for now, I think. I drain the dregs of my cup of tea. Stand into the light, and walk inside to blast the water, sit on the closed toilet. Hold my head in my hands and flush. Let the sounds of the water clean me out. Something has to.

Nathan Leslie is the author of six books of short fiction. His latest collection of short fiction, Madre, was published by Main Street Rag Press in 2007. He is the fiction editor for Pedestal Magazine and the series editor for Best of the Web. For more info check out Nathanleslie.com.