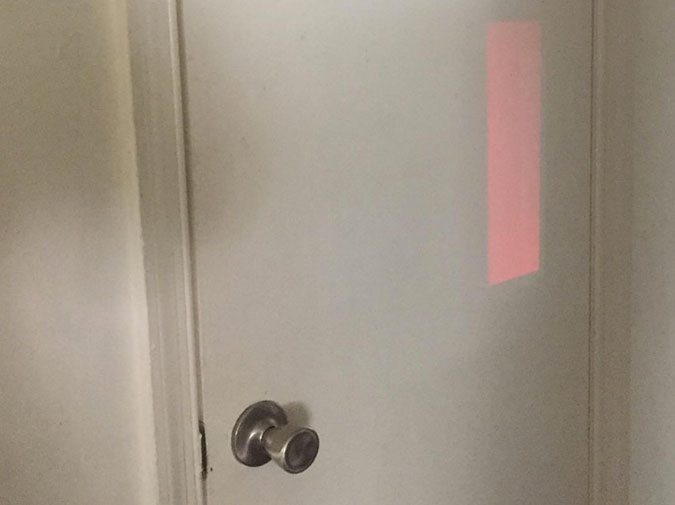 The old woman takes another bite, forgets the partial meal already in her mouth. A minute later, when her cheeks display a noticeable tumescence, the aide rotates in a desk chair, places two fingers on the old woman’s wrist. The gesture seems to reconnect a wire somewhere within her. The old woman begins tonguing brown-orange slurry into a napkin she holds to her lips. I ask if the two-finger technique would work if I used it, but the aide shakes her head.

The head EMT can estimate from the musk of the room how long she has been lying on the floor.

Blankets coiled with dishes, soiled clothing; clock radio tipped on its side.

Tiny shamrock tattoo on the head EMT’s neck. Each belt on the metal chair makes a loud CLICK.

The old woman tilted in mid-air to manage the doorway. The guys who replaced the air conditioner used the same move when they took the old one.

The head EMT places a boot on the step I always tripped on. The plastic call button bouncing at her neck.

I Came Here Tonight Expecting Her to Be Dead

But here I am eating peanuts from my jacket, still fresh from the last trip.

How Well Are You Thinking?

When the officer who had been taking photos of the fist-shaped hole in the cellar window asks if she has any idea who broke in, the old woman says Reggie was having sex on the couch. When the officer raises his pen for the correct spelling of Reggie’s last name, she tells him to get it from the mailbox next door.

I tell her, “It’s all being taken care of,” which is my way of saying, “Men are coming tomorrow morning, men sent by the State, men arriving in a smashed metal fist they will fill with chairs, tables, rugs, plates, glasses—all objects that hold our ghosts.”

She coughs three times every time she lifts a foot, grabs the railing with the force of someone pulling a rope from the bottom of a hole, frayed, knotted end held by a faraway man, v-shaped stain streaking the front of his shirt.

I hand back the cane at the top. With lime-green tennis ball impaled at the tip, she points to spaces that once contained: the milk box, the welcome mat, the cereal bowls left out for the orange cat missing its right eye.

I follow her up the stairs, my hands float an inch behind each elbow. I imagine her stooped form tumbling against mine, dominoes, our bodies turning one over the other toward the landing.

Sometimes her legs get forgetful. Like the time it took them three extra stops to remember it was time to get off the bus. Like tonight, when her toes touch the floor, they bend under her, still dreaming they are stretched out on the bed.

The nurse who calls at 4:23 a.m. says she is required to call. Her voice quivers in the flat, halting manner of someone nervous, delivering a school report on a subject she has memorized but not understood.

Her voice lowers when asked how long she had been there. As instructed on her first day, she repeats that the old woman was “found in a sitting position,” never charts that the patient fell.

Name of the Incapacitated Person

When my arms go around her and lift her, I remember she was the person who once carried me.

William Lessard is a writer and critic based in New York. His writing has appeared in McSweeney’s, Brooklyn Rail, Hyperallergic, Prelude, PANK, and Heavy Feather Review. His visual work has been featured at MoMA PS 1.