The Most Logical Scramble Imaginable 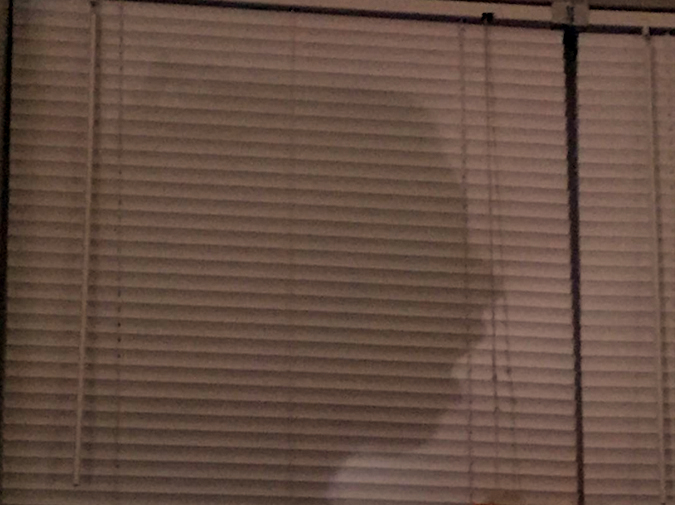 These days writers are obsessed with themselves and once upon a time they were exactly the same way, obsessed with themselves. Once upon a time, there was a man who worked at the Strand and his name was Burt Britton and he loved writers, you can even say he was obsessed. It’s a funny situation: in love with a type of person for whom self-love is the highest love. So how was Burt Britton going to get the attention of the writers he loved, how was he going to get them to pay attention to him?

He said, I’ll make a book. He said, The book will be a collection of self-portraits by the writers I love most.

He wrote to the writers he loved most and asked, Does this sound good to you? Would you like the way you see yourself to be immortalized in a book published by Random House? The writers of the world obliged. 739 of them. Really! And the book became real! It’s called Self-Portrait: Book People Picture Themselves and I have a copy autographed by Burt Britton and it includes a self-portrait of him and you can’t borrow it.

It’s impossibly addressed to Tom, on Christmas, February, 1977, and then there is a head wearing glasses and a beard. Who is this Tom? Maybe Pynchon? (I believe Pynchon is behind the mystery entry “Bill Smith.”)

Thinking about this book now, after logging off of Twitter for the day, I think to myself, Social media is nothing new, these days it’s just stupider with more corporations involved. But there’s no deep difference between this book and what writers do on Twitter every day.

Nostalgia for the era of Burt Britton doesn’t make sense. People do the same thing today, schmooze, pull stunts, publicize postures psychological and political, nothing’s changed in the authors or readers themselves. (Their hearts are like stone…unchanging…) The one difference these days is that publishing power is less centralized so celebrations of ourselves can be produced more often.

There are plenty of canon-making collections published all the time! Best writers under 70! 30 writers likely to have babies before 30! The new radical traditionalists! The best scifi clifi realist formalists! The best writers who are also editors who are also first and foremost readers! And so on and so forth and we will be publishing books like these forever and ever.

But there’s no collection like Burt’s: pure ego. Think of it! Not an anthology of writing by writers, not interviews about their process, not essays of mentoring or being mentored by them—nothing real or objective, none of the work. Burt’s book is the ultimate autograph, pure because there’s no text on which the signature appears, the signature is the text itself. Self-Portrait is the epitome of the artistic impulse: the desire just to be famous. No evidence, no trial, just judgement, just love.

Burt’s book—Random House published, Strand conceived—is the true New York book. I’d say it’s as close as you can get to lit New York in a book. And guess what, it’s out of print! (Once again, you cannot have my copy. Should I ever be in need, I will try to sell it to the highest bidder but until then, please do not query me.)

This book is about literary celebrity and its appeal. But Burt himself comes off as egoless and mostly just grateful that his favorite writers paid him mind. In his introduction, he writes: “What I really want to do here, being told I must explain Self-Portrait, is thank everyone. I can’t. I can’t, because I can’t list them all. No book could hold them all. And the Self-Portraits themselves need no explanation. Why birds and trees and rocks and stars? Well, why birds and trees and rocks and stars?” He began running into idols and asking them to draw themselves, and soon he began writing letters as this hobby became “obsession: to try to reach, if possible, everyone who had ever given me anything, a poem, a story, a novel, a line even—what I call a gift, for what else is a story from Chekhov, a novel from Faulkner, a line by Camus? No one, if I could find a way to reach them, should be left out. I OWED THEM.”

But there is only a tiny distance separating OWED and OWNED. Don’t you think a small part of Burt wanted the non-writer’s revenge on the writer? To own them? To have power over them, where they were placed in his book, and so on? Don’t you think he relished the notion that writers wanted to be included in his book, that they were waiting for Burt’s call as though it were an invitation to the ball? For all his deferential manner, for all his affect of wide-eyed admiration, Burt’s a self-mythologizer, and his background one of attention-seeking. As evidence, I present the following, beautifully reported by the Australian writer Morris Lurie in his book, About Burt Britton, John Cheever, Gordon Lish, William Saroyan, Isaac B. Singer, Kurt Vonnegut, and other matters:

“I read my first book,” he tells me, “when I was twenty-three years old. William Faulkner. The Hamlet. That was the first. Before that I hadn’t bothered with books, didn’t know what they were all about, didn’t care. I was a Marine. Made Sergeant. But what I was interested in, the only thing I was interested in, was baseball. The Dodgers. My Brooklyn Dodgers. You don’t know the Dodgers?” Burt Britton looks at me, outraged and sad at the same time. “Morris, you never heard of Robinson and Reeve, Furillo, Campanella, Cox, Snider, Hodges, Erskine, Labine, Gilliam, Podnes, Balck, Durocher, Dressen, Stankey, Casey, Ramazotti, Amoros, Rojck, Lavagetto, Hermanski? Morris, you never heard of Pistol Peter Reiser! They were my life.

“I became an actor so I could go out to the Coast when the Dodgers moved out there. You know what kind of actor I was? I was George C Scott when they wanted Tab Hunter. That was when I realized what I’d been missing. I had a lot of spare time, being an out-of-work actor, so I got in a lot of reading. I read like crazy. Morris, I had a lot of catching up to do. I was round at the Strand so much they offered me a job, which I resisted at first, I mean, I didn’t want to work in a book store, but finally I thought, why not? They pay me a lot of money there, Morris, and I get all my books cheap.”

Overbearing though he may be, I’d like to believe that Burt is prideful rather than egotistic; I mean, he’s pushy because he’s so proud of his devotion to other people. Baseball players! The characters he impersonates as an actor! Eventually, William Faulkner. Sure, his motives might have been mixed—readers have egos too. But more than anything, Burt is head over heels for the people who made the things that make his life meaningful.

By the way, that book by Morris Lurie? It’s great, and it’s out of print too! And my copy is signed! By Morris Lurie himself.

Whether the writers themselves saw Burt’s enterprise as self-serving or questionable in any way is unclear. What is for sure is that they couldn’t care less about why Burt was putting together this literary yearbook, they were just glad to get the publicity! A lot of the self-portraits aren’t portraits at all but are instead visual manifestations of writers saying: If you think my images are clever, just wait until you see my writing! Here’s some of the best portraits from the book: 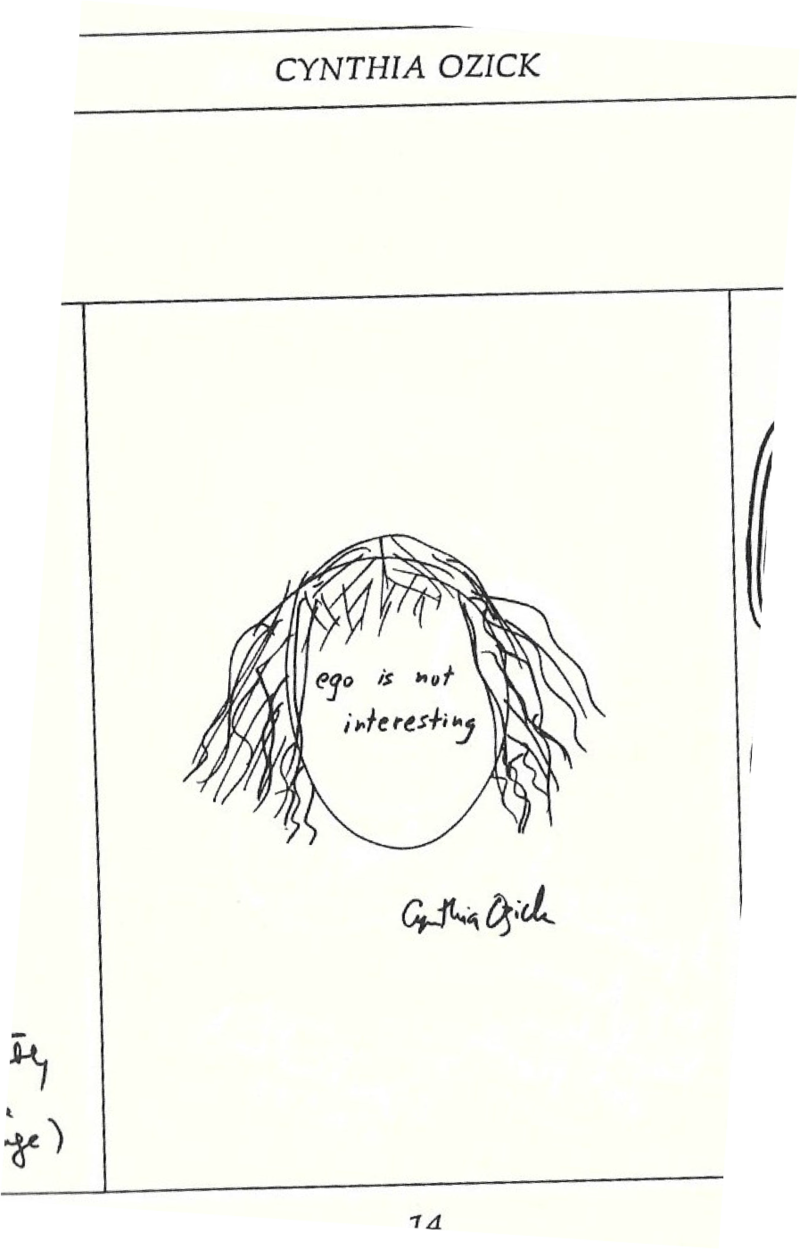 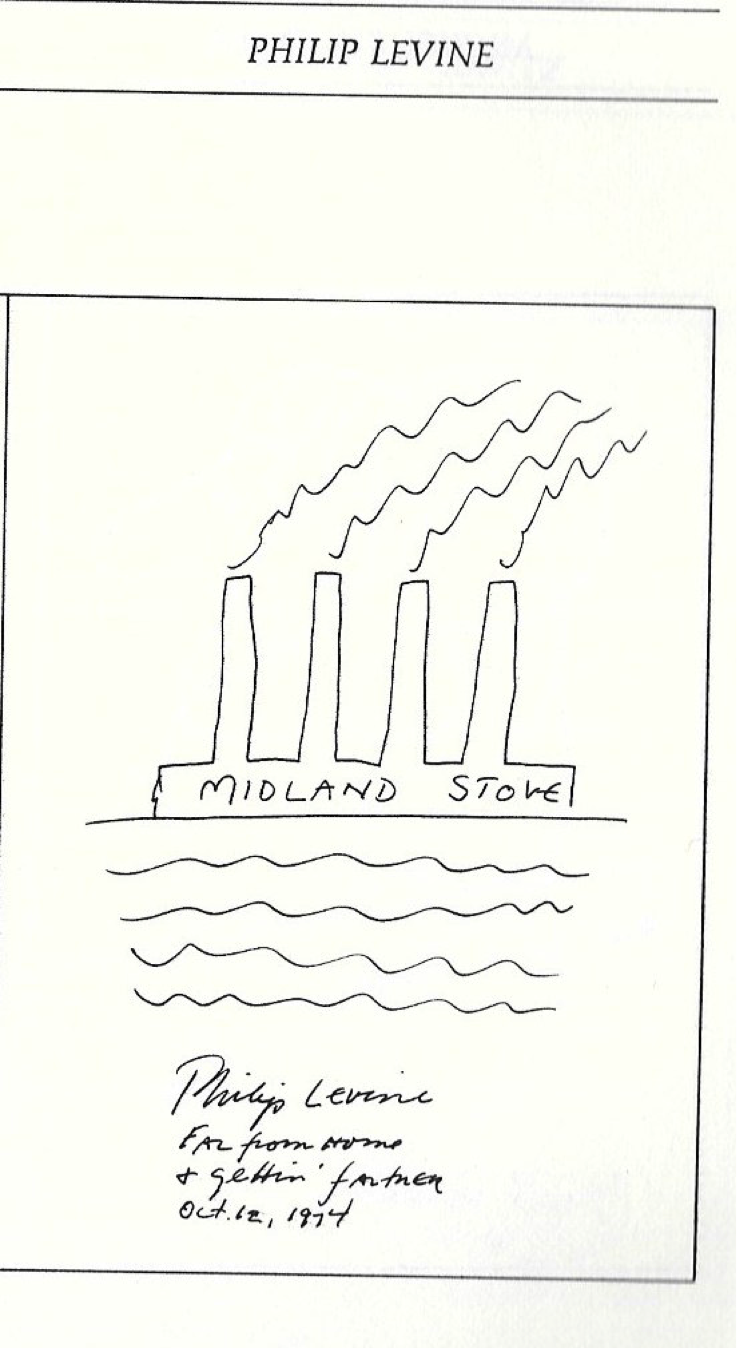 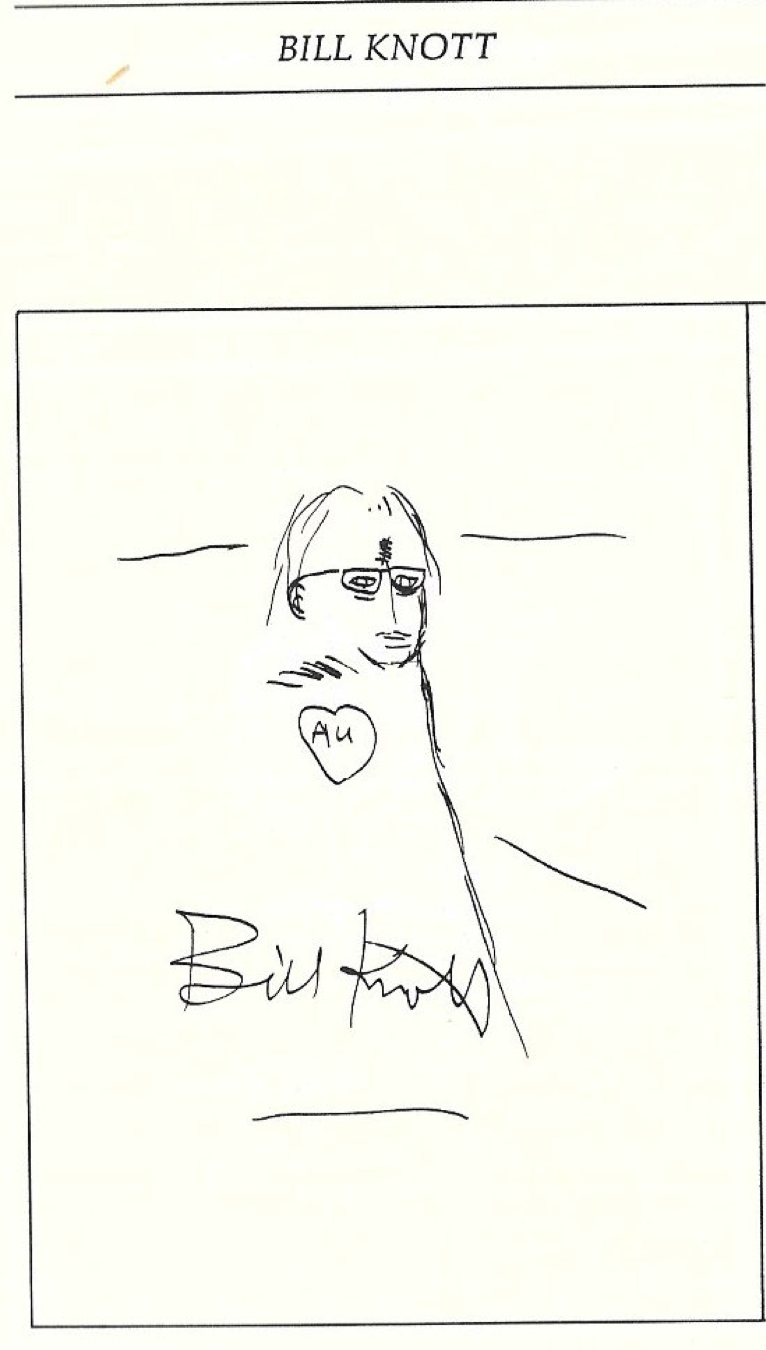 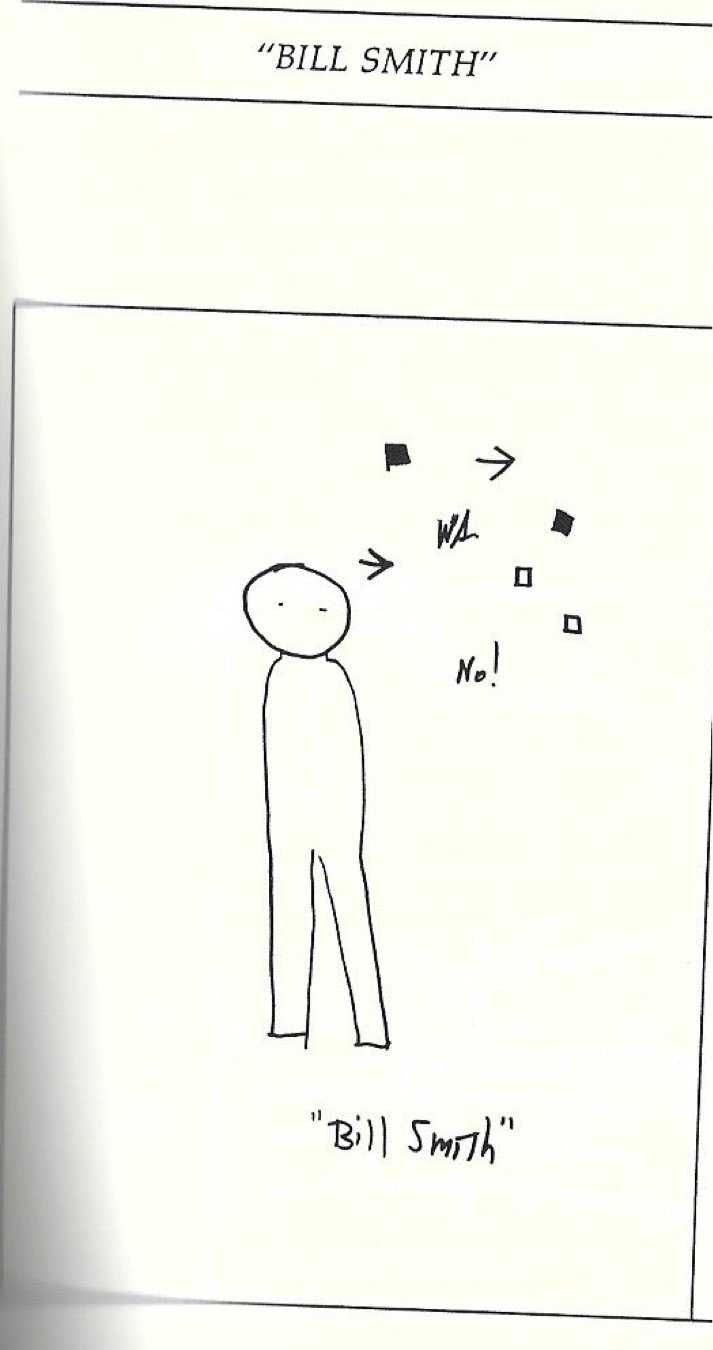 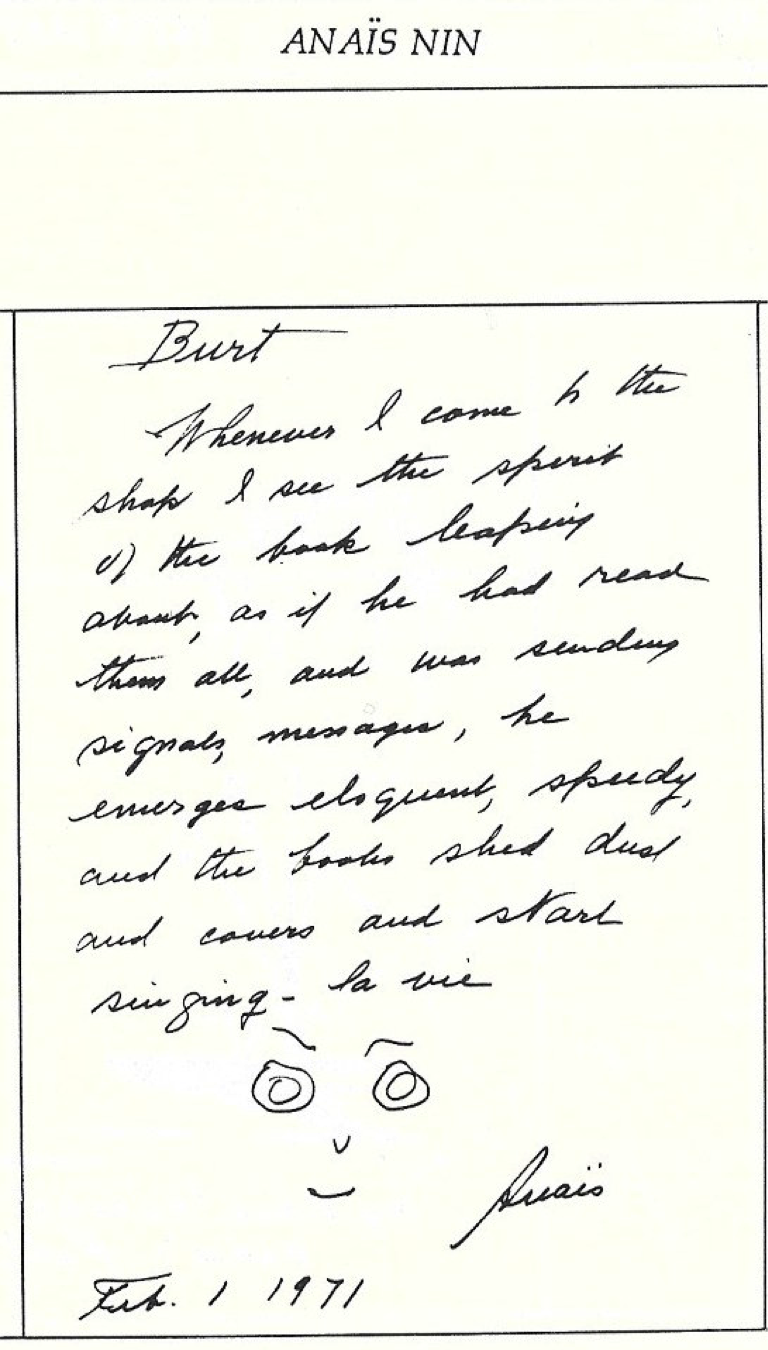 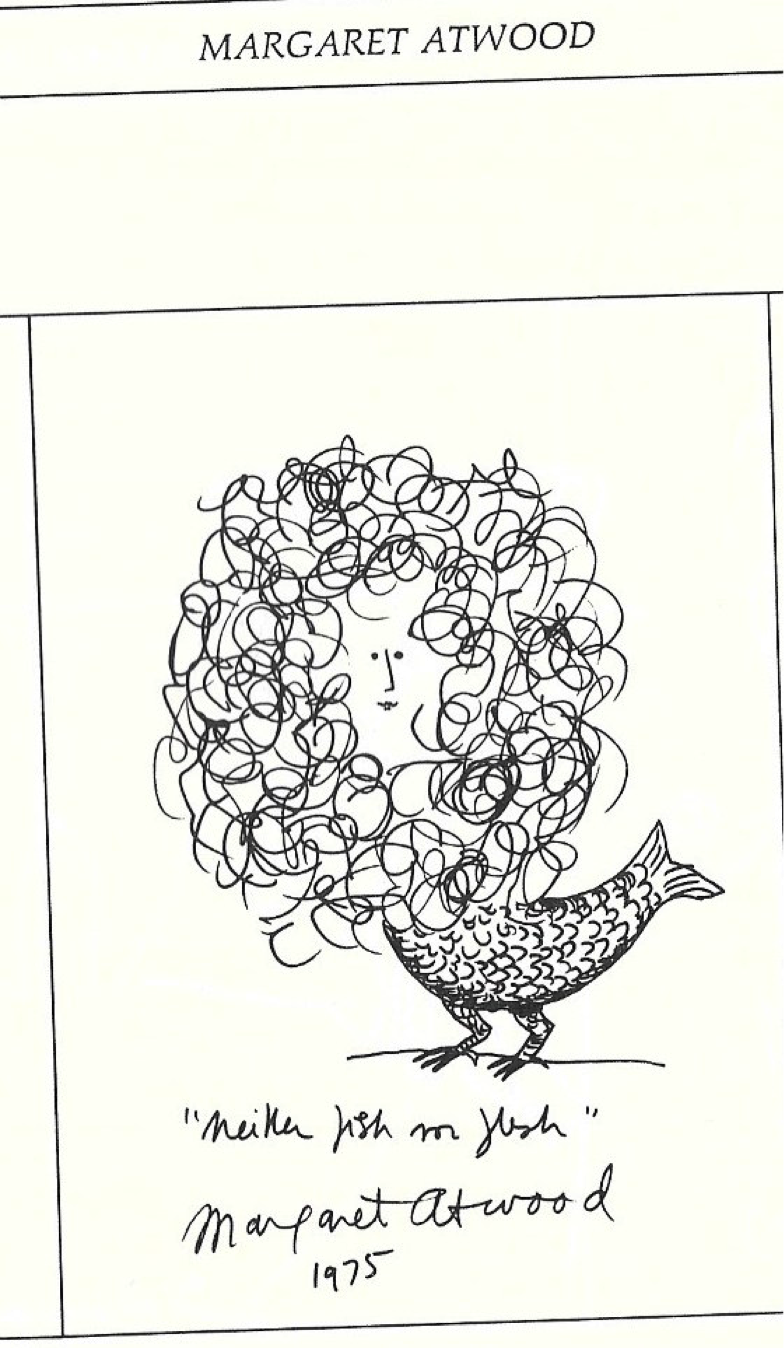 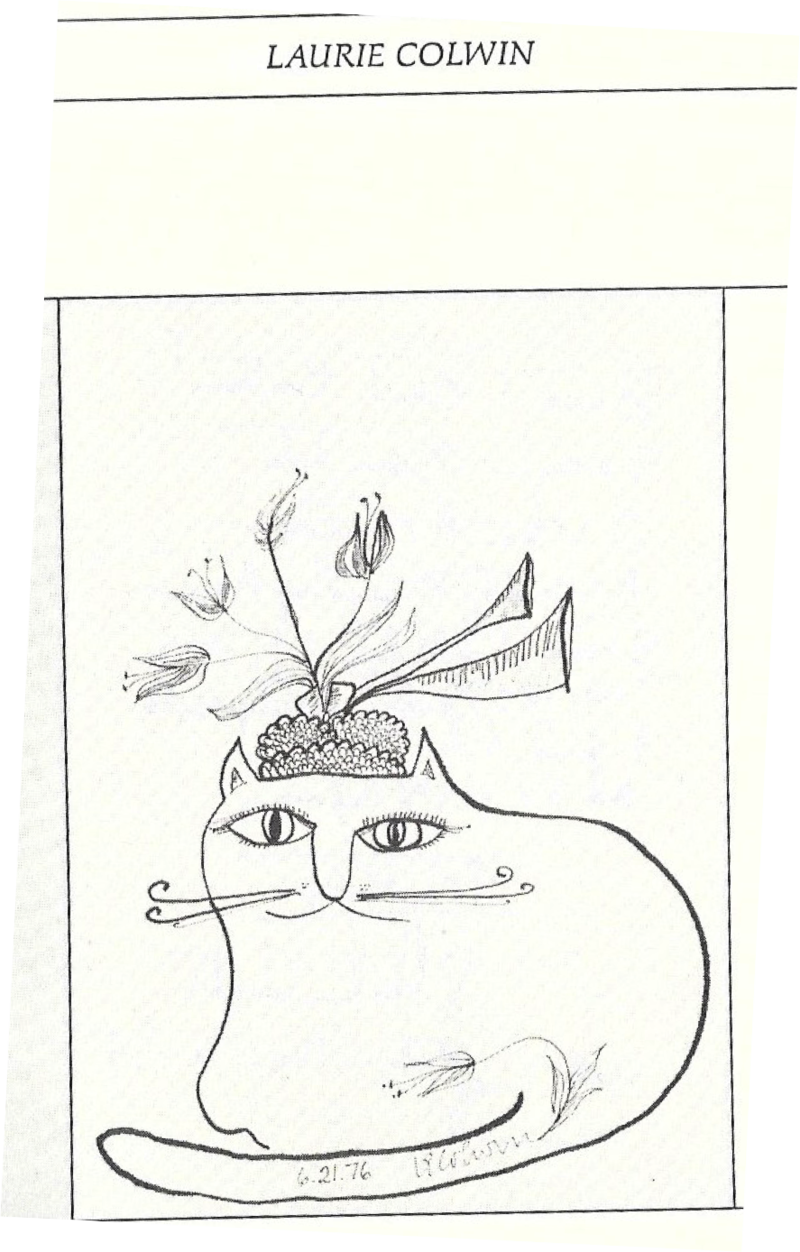 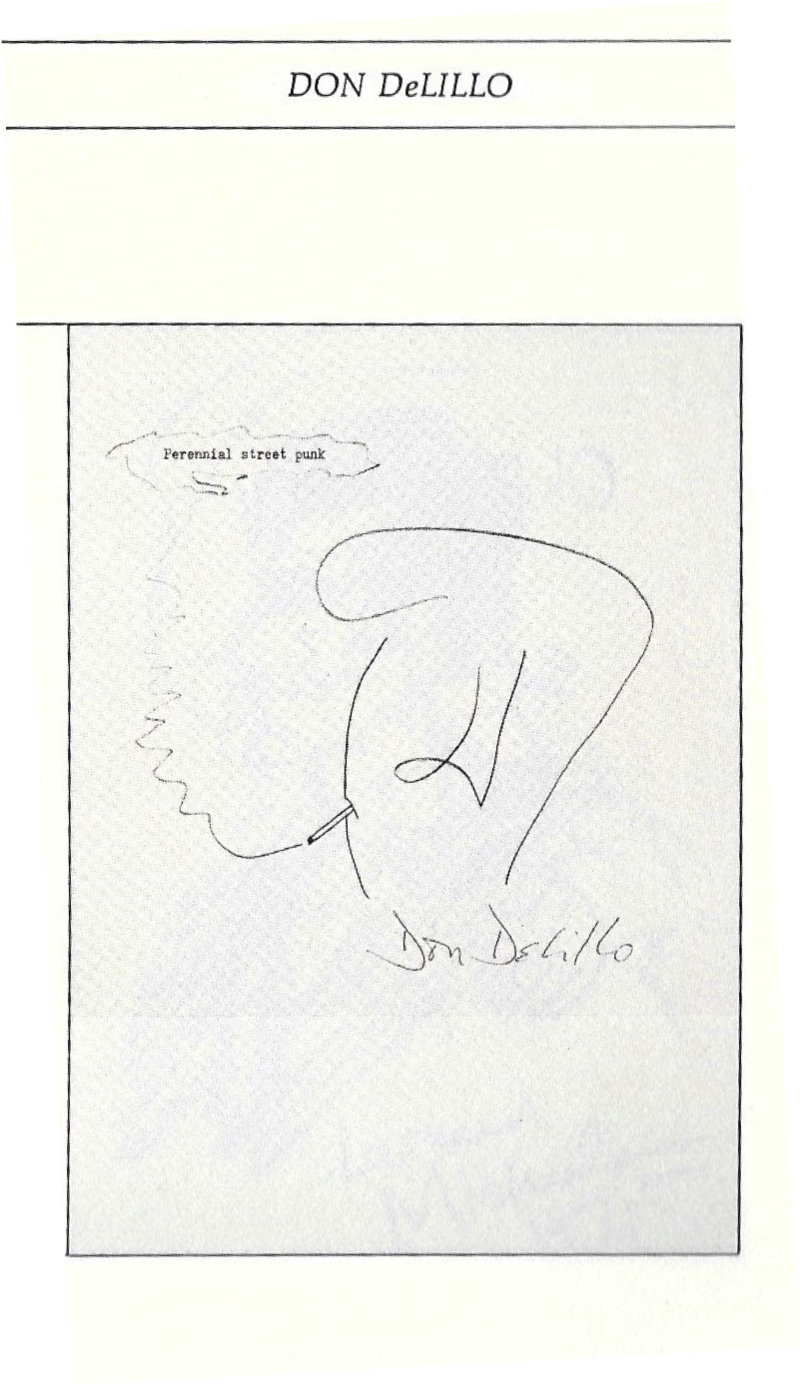 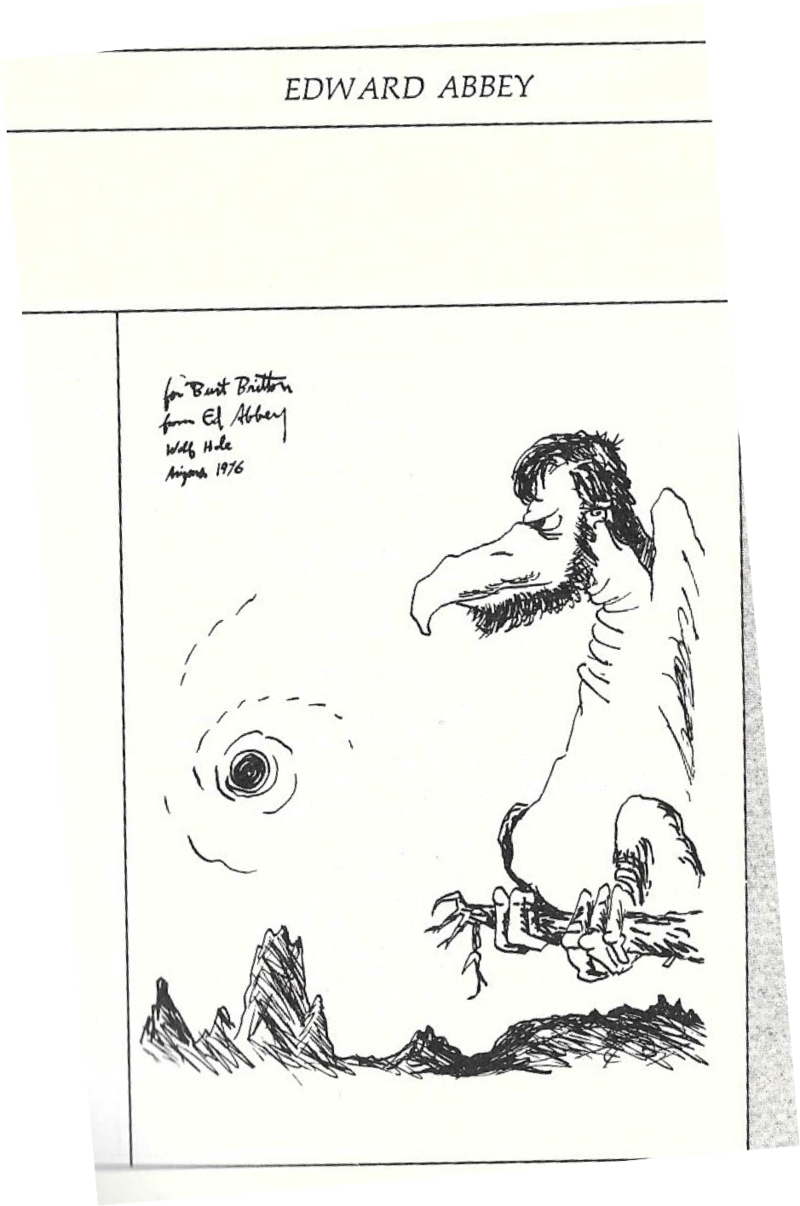 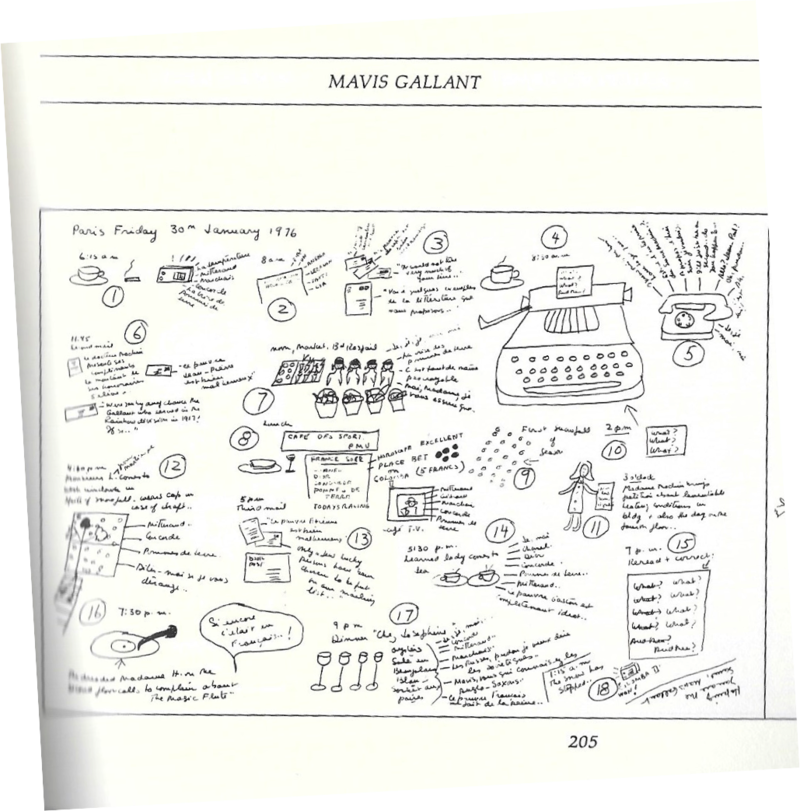 The writers, eager to see the finished product, lined up outside Burt’s office at the Strand right as the galleys arrived and each day for a fortnight there was a line of the greatest writers in New York. Here’s how Morris saw it:

Living writers without end. And as each one comes up Burt hands him or her a gratis copy of the book and let me tell you what they do, these living writers, each and every one, without fail. They turn, seemingly nonchalant, the pages this way, that way, calm, unhurried, only there’s nothing calm and unhurried about it. What they’re doing, each and every one of them, is seeing what page they’re on! Are they up the front with the important people? Are they in the middle with the riff-raff? Or, God forbid, down the back…More than that, are they in a good position on the page? Have they been printed smudgy or clear? Heavens, they are a curious bunch, these top literary folk!

Actually, Burt has been to great pains to avoid exactly this kind of fuss. He’s arranged the drawings in the most incredibly subtle fashion, separating playwrights (who might also be novelists) from poets (who have written short stories), journalists from essays, illustrators from real artists, and so on, the most logical scramble imaginable, impossible to take offence no matter where you are.

“The most logical scramble imaginable.” Literary social hierarchies are absurd, ever-shuffling, and as superfluous to the readers as they are essential to why writers begin writing in the first place. (Writers write because in a childish way they want people to admire them and put their verbose self-portraits on the fridge magnet.) Literary society and the climbing/falling involved? Stupid! For the birds! But this social mountaineering is the best method of managing writer egos we’ve invented so far, not the most perfect system possible but the most logical scramble imaginable.

And it’s dumb and mostly it’s scratch-my-back-I’ll scratch-yours idiocy, but, it’s all done for the sake of readers, readers, who love words, real words. All this is done to appease the writers, who only exist for themselves, so that they keep writing and the words themselves can continue to go to their actual owners, the ones who love them, readers. I’d like to think that Burt realized this too, no matter the pretensions, pleasures, and advance money brought to him by this book, which was responsible for “the greatest literary party in the history of New York.” Let me leave you with an image from Morris’ essay, where he is at the launch party for Burt’s book (with over 739 guests) and he’s milling around searching for the man who called himself “the world’s greatest reader”:

Looking for Burt in this crush of literary people, less than a tenth of whom I recognize, probably half that, there suddenly comes to me a staggering thought.

I am bowled over by this realization. And I think, maybe next year, or the year after, certainly some time in the future, there will be a literary party in New York to beat this one, more people, more famous names, but no matter how big it is, no matter how famous and numerous the guests, it won’t be the biggest literary party. Not the way this one is. Because this one is special, one of a kind, never to be repeated. New York will never see its like again. For this is a party of love.

And then I see Burt Britton.

Michael Mungiello is from New Jersey. What a world! He lives in Brooklyn and his Twitter is @_______Michael_