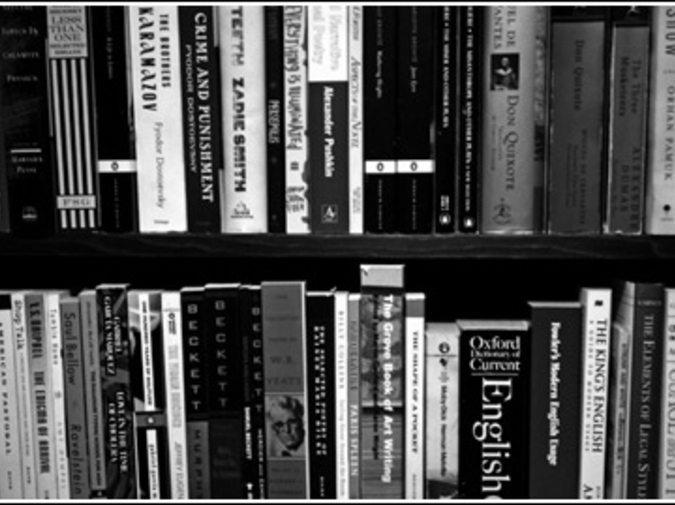 I'm functional in the sense that I make it to evening confrontations. At the sushi bar, Gita keeps talking about some girl she works with: "I just think that she's just really into identity. Identity politics."

I roll my eyes and she eyes me with a snivel, motions for the check.

We exit the bar. Main Street's cleaned up, like everything else. Everyone on the sidewalk vaguely reminds me of someone I've slept with. They each walk alone, tipsy on the ocean steam, charging the air with their private aspirations to danger. A salty city makes you feel like a part of something bigger than yourself.

I deliberately brush against an Orthodox Jew when he averts his eyes from my knees.

Back at home, it's his same thin face, same bony body. I think: When I'm drunk, I'll fuck anything. I stare at B.'s mouth.

"Maybe if you're drunk, you should just go to sleep," he says.

"Uh huh," I say. I watch him type into his iBook, in his wrinkled salmon-colored T-shirt. "Well, that'd make sense."

We're in the small, spare living room, waiting for midnight. I'm on the floor, sitting with my legs splayed, leaning back on my hands. He's straightbacked on the couch, surrounded by five books, neatly opened and bowing face down.

I nod with my best academic seriousness.

He turns back to the screen, begins the usual: The curious flurry of speedy typing. The strategic flipping through one book, then one more. The sharp exhalations. Even the rubbing of feet, followed by the bouncing of them.

I watch his high arches, his thin elbows, the bones of his neck, tense like a stainless steel fork.

Most days, I wake up with a dull pressure just above the right eyebrow, and another to the right center of the forehead. Sometimes, the pain moves to settle below the left eye. The bed squeaks when I eke myself out of it--B's long gone.

I step outside in yesterday's clothes, gripping my pen like a steak knife. The city's noise makes everyone short-tempered, tight-lipped. The new guy at the coffee shop gets his power trips by bumping my chair. I wince every time he clears the table behind me.

Dinner's a tense, quiet affair, his nerves hanging down from the ceiling in jagged strips, swaying lightly every time we breathe out.

I used to think what I liked in men was ambition, but now I guess it can't be desirable having two people skulking around a house, morosely plotting their petty attempts at a sort of world domination, world defined narrowly here to generally revolve around a select industry or genre or discipline with its attendant disciples to myopically collude and compete with.

B says: "Do you think you could just let me know if you break a glass? Cuz I cut my hand on it. Pretty bad, this morning."

Initially, I thought B might straighten out my life a bit, make me a little more content, complacent.

"Can I use this orange juice for a screwdriver?"

"I was going to have that for breakfast."

Today everyone looks slightly like someone I know and despise. I watch them over my cup, belittling their imagined lives. I sit for hours in the dank steam of the espresso machine, precisely mapping out the minute complexities of this particular hangover.

The party's getting ugly so Matt and I go exploring upstairs, find what looks like a guest room and close ourselves in. We both splay on the king-size bed with a big exhale. I kick off my heels, fish out the flask from my purse. We each take a big nip.

"B. opened some old bottle on Monday and we've done nothing but work on it all week. A full time gig, basically. This is the dregs."

"Why--Did you save the world this week?"

I get home still lucid. "They only drink beer, those Sierra Club people," I say. "You should come with next time."

B. turns back to his book. "I'm not into the environment," he says.

He looks at me, then at the empty bourbon bottle on the bookshelf, then back at me. I stomp over, grab the bottle, throw it in the recycling bin with a clang and he says "Okay then," turns to his book again.

Do I feel myself in my own home? It's hard to say. How does myself feel? Perhaps the way I feel now, in this room, is what myself is--is the defining feeling of what I call myself.

Choosing to be happy seems so often like settling for mediocrity, laughing at the same jokes, meeting yet again the same people who amuse or bore or annoy you in the exact same way they did last time. Yet don't I too have my habits, my own delusions, my embarrassing private aspirations?

B. leaves, saying he needs space to write. "It feels tense in here. Don't you think it feels tense in here?" he asks. I nod carefully. He waits until I come in the bedroom to pack a sorry suitcase--a change of clothes, scuffed shoes, a tie that doesn't match, and a few pens thrown in on top. When he closes it the suitcase is still mostly empty. The pens rattle when he lifts it off the bed.

He's waiting for me to create some usual scene, let it all blow up and settle into a comfortable strain. He walks towards the door but I can't bring myself to fight it, can't even muster up the curiosity to ask where he's going, or for how long or forever.

On lonely nights I blame myself. I leave a party after a guy I talked to--the shorter one with a hint of a beer gut--marches past me with a breezy half-goodbye on the way out. This makes me think about realistic expectations, the honing of them.

In the car: "Last week you were making out with this blond woman at the bar," Gita says. "And I was like, 'her boyfriend's right there!' And she was like, 'oh it's okay, he doesn't care.'"

"You said really scary things on the way home. Like, suicidal stuff. You really scared me."

In the evenings I take in the coastline, imagine deleting each footprint, along with the person who made it.

A few men wearing orange gloves slowly shuffle around under the pier, picking up bits of trash. Their hands seem to glow a little, luminous.

I eyeball the lumbar curve of the cold beach.

I have a recurring dream where I enter into a marriage of convenience. I get into the elevator in a big hotel lobby in my wedding dress, and each person getting on and off greets me with a cheery congratulations! Thanks, I say, nod, smile shyly.

The man's someone I could love, except that he's in love with someone else. A complex tangle of immigration and legal issues has made him need me for a wife. And I pretend it's all fine because I don't mind helping a friend out. I agree to do it.

We're on the balmy roof of Gita's downtown loft because the party was getting too crowded downstairs. I'm talking to the guy with the most emphatic haircut. Dark jeans, dark hair, dark T-shirt, dark beer in hand. A replant from Philadelphia. We talk Duchamp, creative license, financial identity.

"Cash is such a grubby, disgusting thing," he says. "But now--Credit. Well, that's the philosophy of capitalism. The intangible metaphor of what could be--"

I look carefully to see what makes him different. "Wait," I say finally. "You're missing an eye."

Siel Ju is desperately trying to wrap up her dissertation so she has something to show for the last six years of her life. She reads and writes in Los Angeles and blogs at greenlagirl.com. A few of her poems are forthcoming soon in How2.