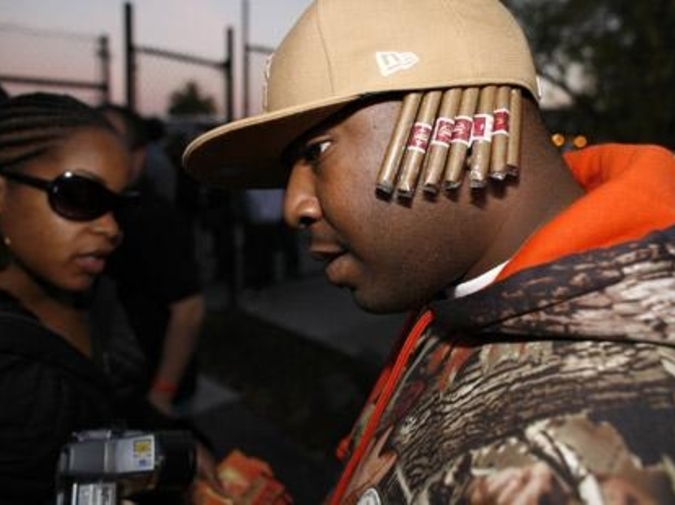 The Jacka is dead. I saw him about four years ago in concert during my sophomore year of college and according to early news reports, he was shot and killed yesterday after the Superbowl. People are posting Jacka songs on social media, remembering him as a Bay Area legend, a pioneer, a gangster, a mentor. When I saw him perform, I remember him taking off his sweatshirt, throwing it into the audience and a tall girl, who was wearing high heels that made her look even taller, catching it mid-air. I watched her quickly stash the sweatshirt in the space between the stage and a security barrier. I was at the show with my friend, Andrea.

We stood close to the stage, not quite the front row, but close – only a few feet from the tall girl in heels. Andrea stood close to me, her shoulder pressing against my sweat-stained armpit, and I wasn't sure if it was because it was crowded or because she wanted to be close. We went to the show with a few friends from the dorms, from whom we were now separated, but that didn't seem to matter to either of us. It seemed, at least to me, better this way. Then she leaned her head on my shoulder and a fight broke out next to us.

It was the first week of college when I met Andrea. Unfamiliarity made the days seem long. People were friendly only so they didn't have to be alone. The bathrooms were co-ed. I walked into a friend's dorm room where a mini-party was taking place and she was there wearing a pink Dipset shirt, sitting on the floor with her legs crossed. She smoked a joint with her eyes closed. We talked mostly about gangster rap and our mutual home of the Bay Area and drank beer and laughed at pictures on the internet. People often laughed at things Andrea said, even when she wasn't trying to be funny. Someone, I forget who, compared her to LeBron James because she made everyone around her better – as people, not at basketball. She quickly became popular. We started eating dining hall food together and took the bus home on Tuesdays and Thursdays.

Andrea weaved expertly through a dense crowd of dancing fans. She turned around, then motioned me to follow. I walked in her direction, dodging the wild swinging arms of the front row audience until I finally reached her. She looked at me and grinned. This particular concert remains one of the most violent music events I have attended. Earlier in the night I saw a skinny white kid get punched in the side of his head during a scuffle over a free CD that The Jacka had tossed into the crowd moments earlier. Beer bottles were breaking all around. It was a bad night to wear sandals. The Jacka and his crew threw lots of free items into the crowd that night, including alcohol, weed, a few T-shirts, and, at times, encouraged people to fight or, at least act aggressively toward one another, and he became noticeably excited each time a new brawl transpired. Andrea took a hit of a blunt of mysterious origins and passed it to me. I declined. The venue was a hotbox. The weed smoke didn't seem to pacify the crowd, though, as minor riots broke out between songs. People wrestled for free merchandise, unwilling to let go or retreat like possessive dogs. Security was busy that night. “This is so cool,” Andrea said, unfazed by the chaos around us, “I'm glad we came.”

Andrea and I watched The Jacka's performance from our new front row vantage point. I felt her shove something soft into my stomach. “Here, hide this,” she said. It was The Jacka's sweatshirt, a plain grey zip-up, the one caught by the tall girl. In one smooth motion, as if concealing drugs, I stuffed the sweatshirt into the corner of my jacket, giving me the appearance of a sideways pregnancy. The concert continued, The Jacka kept rapping. I wiggled in discomfort, adjusting continually to keep the sweatshirt from falling out. I tapped Andrea's shoulder after the last song ended, pointing toward the back exit. Before the encore was the time to make our escape. Holding the hood of my jacket so we didn't get separated, she followed me, pushing our way through the crowd, praying I wouldn't clumsily step on someone's all white Nike's. On our way to the exit an awkward teenager in a beanie tackled a fat guy in a beanie. To give the fighters room the crowd spread open. “Santa Cruz!” The Jacka screamed, “Who's trying to get fucked up?”

Better known as The Jacka, Dominic Newton was born in August, 1977 in Pittsburgh, California. Early in his career, Newton converted to Islam, changing his name to Shaheed Akbar. He released 14 solo albums, along with numerous collaboration records and mixtapes, including 5 with his group, the Mob Figaz. Working with top recording artists, Newton made songs with many famous rappers, including Mac Dre, Freeway, Paul Wall and E-40.

Once outside, I unroll The Jacka's sweatshirt from my jacket, revealing the XXXL garment, in all its glory, reeking of blunts and harsh body odor. “You can keep it,” Andrea says, theatrically holding her nose to demonstrate her distaste for the stench. “Are you sure?” I ask. But I knew that it was mine  the moment it was handed to me. To show my gratitude I buy Andrea a slice of pizza. I look around, paranoid, making sure the tall girl we stole the sweatshirt from is not looking for us. Andrea tells me to relax. We walk to the bus stop. She is smiling and we are both sweaty from the body heat from the concert. Her forehead is shiny. I try on the sweatshirt and Andrea laughs, clasping her hand over her mouth to hide chewed up pizza. “You look ridiculous,” she says, “Like a little kid trying on his dad's clothes.”

Once I get home I look at the giant sweatshirt and think about the night. The music, the fights, Andrea. She rested her head on my shoulder, leaned into me. She gave me The Jacka's sweatshirt. Maybe it was meant only to be platonic. Platonic sweatshirt. I try to think of other signs of affection she may have shown me in the past. She is friendly to everyone. I don't know. I fall asleep with my ears still ringing from the concert.

Two weeks after The Jacka show Andrea started dating a mutual friend named JT, a hunchbacked kid who mumbled like Hunter S. Thompson and never seemed to laugh. I once saw JT break a bottle over a local drunk guy's head, and I think it was somehow self-defense but I don't remember exactly what happened. I was drunk when it took place and the next day I remember waking up hungover with an image of a man with his face full of blood. That moment defines JT in my mind. I stopped hanging out with Andrea after they started dating, only talking to her when we bumped into each other on campus, making small talk, performing the charade of catching up out of obligation, not friendship, then moving on. She dated JT through her senior year and eventually moved into an apartment with him. They broke up the summer after graduation, after JT was accepted to Columbia Law School.

The Jacka died yesterday. He was 37. He made gangster rap, was in a group called the Mob Figaz and died like a story from one of his songs. It feels surreal and random like the passing of any other public figure. This is different from other celebrity deaths, though. It is an abstract sadness, as if a friend of a friend died, someone I knew peripherally, yet to whom I was connected in a strangely roundabout way. A few weeks before graduation, I see a sour mash-drunk Andrea at a party and she is introducing everyone to her younger brother, who is embarrassed and sober. I say hello, shake her brother's hand and discuss with her how it's “Sooo crazy that we're graduating,” “Where the time went?” and our “Exciting plans after college.” When I bring up the concert we went to roughly two years ago, Andrea's eyes flash with an intoxicated remembrance. She sways as she talks, as if floating back through her memories, casually nostalgic, a wash of moments in her brain, which, with whiskey on her lips, she converts into words, gestures and anecdotes. She lists songs The Jacka played and mimics his onstage persona. She brings up the small white kid who was punched in the face. “That was so brutal” she says, her smile now fading, “I don't know what he did to deserve that.” We keep talking and then eventually one of her friends takes her away and she waves goodbye, shrugging her shoulders and laughing as she leaves. The sweatshirt isn't mentioned. The thought of it, though, lingers like a dream or a bruise.

Kenta Maniwa was born, raised, and lives in Oakland, California. He graduated from UC Santa Cruz in 2014. He likes Hennessey and tacos.