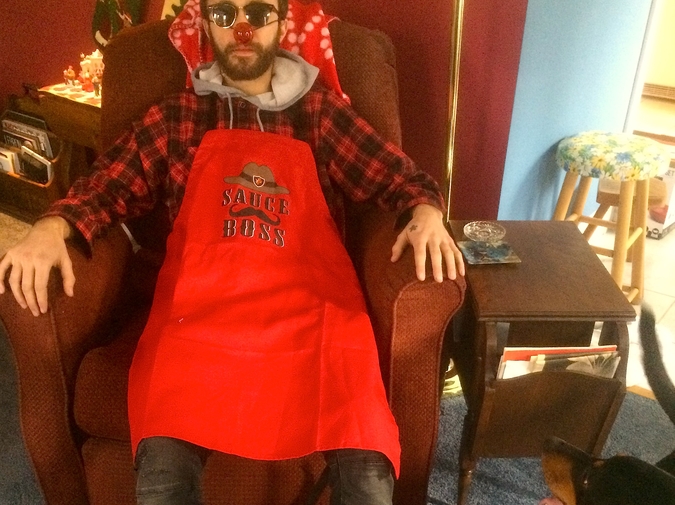 Despite the fact that Peewee Longway pretty much invented the triplet flow - popularized by Migos, among others - that is now used in essentially every rap song on the radio, coined the term/started the "dab" movement, and is, or at least was, who he says he is/was: a drug dealer - the specifics of which being unimportant to me, but the realness and humility with which he sets trends waaay before people know it and isn't belligerently trying to take credit for them make him worthwhile and admirable - he seems to be one of the most slept on rappers of the new Atlanta movement.

Following the release of his mixtapes Money, Pounds, Ammunition - a collaboration tape with Gucci Mane -, The Blue M&M and The Blue M&M 2, and others, Longway was set to released his debut album, Mr. Blue Benjamin, today, but I can't seem to find out whether or not it was actually released, via searching for it on the internet.

Memories of listening to Run-D.M.C.'s "Christmas In Hollis"

When I was ~6 years old my dad drove a white Toyota something-or-other and my brothers and I all viewed it as a “treat" when we got to ride in it.

During the holiday season my dad would play Run-D.M.C.'s "Christmas In Hollis" a lot. That was when I learned what collard greens were via the line "...Mom's cooking chicken and collard greens." I remember thinking that "...rice and pudding, macaroni and cheese" was a weird combination of food, but when I just re-listened to the song to find the video, I realized he said "stuffing" not "pudding." ...

Thoughts Re: Christmas As A Child

When I was ~4 years old I asked my mom if Santa Claus was real and she said "No."

Thought Re: Christmas As A Teenagers

When I was ~15 I got high and drunk alone in the woods ~9AM on "Black Friday" then went to the mall near my parents' house with my friend, his brother and his brother's girlfriend. I saw my friend Richard Wehrenberg, Jr. - who co-authored think tank for human beings in general with me - with a group of people dressed like zombies, getting escorted out of the mall. After ~15 minutes of waking around the mall I went outside and smoked a cigarette then asked my friend if we could leave. My friend's brother's girlfriend convinced me to by my now-ex-girlfriend edible lotion which I didn't ever use.

A lot of my teenage -ist -ism punk world-changing was really just my ego wanting to make everything all about me. I still feel like [things mentioned above] are fucked, etc., but instead of unsolicitedly telling people my opinions or alienating people because I'm Right And They're Wrong, I try to just like, try to be a son/friend/[person in general]. If I made all of my decisions in life simply based on my happiness with no consideration of others I'd be a shitty asshole - I know because I've been one.

It makes my parents happy for me to spend time and be present (no shitty pun intended) on Christmas, so it's like, the least I can do to spend time with them. They literally gave me life then endured the hell I put them through as a teen - [I can't write anything brief enough for the purpose of this piece re: my parents, but I was blessed with dope parents] - and it's like, not that hard to spend a day relaxing and just giving and receiving gifts.

Lines From Rap Songs Re: Christmas That I Like

"I caught her looking at my Rollie as my mojo spills / Snowflakey on the bezel, hope you know those real / Okay my white girl Veronica, black girl Monica got me celebrating / ChristmaHanuKwanzaakah / Rockin' dashikis with a yamulke / Where Christmas tree at? Let's design it up" - Kanye West ft. Big Sean, Jim Jones, Cam'ron, CyHi The Prince, "Christmas I Harlem"

"Thanksgiving, it was hell, nigga, and I stayed up on Christmas Eve / And I ain't have shit under the Christmas tree / But I still ain't blame my mama / Real talk, it motivated me to go and get them commas" - Rich Homie Quan, "Time"