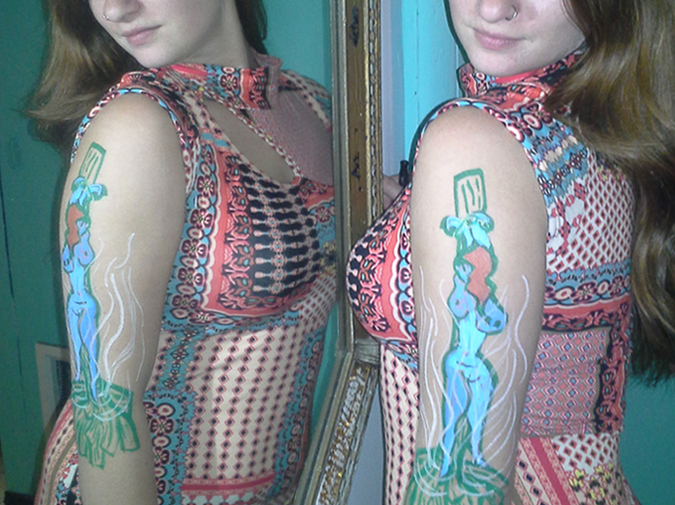 His new girlfriend makes things with her hands. You know. Things. Candle holders out of twigs. A mosaic picture frame out of broken bits of CDs. For his birthday, she drilled holes into a sanded down tree stump so that he would finally have somewhere to put all his paint brushes. She posted an image of the tree stump on Instagram alongside the caption, Wood you look at what I did? And then a thumbs up Emoji.

I tried to hate the tree stump but found that it was too good to hate. Instead, the tree stump made me feel happy for him, that he was in a relationship with someone so skilled and so earnest.

There is not much I can do with this happiness of mine. It sits inside me, unmoving. At least anger is stimulating. Anger propels your life forward. If I were angry, I could finish a book of poems. I could attend a class in burlesque dancing. I could clean out the freezer.

His new girlfriend is outdoorsy. She’s from a state like Vermont or Maine or Oregon. She knows how to chop wood. I do not know this for a fact, but I can look at her face and I can tell: this woman has chopped wood.

I don’t make things with my hands. I don’t know how to chop wood. I don’t look like a famous actress. People are always asking me, Haven’t I met you before? and I have to tell them, No, no. I just have the same face as a lot of people.

I never intended to become friends with his old girlfriend. I intended to see her. And, so, I started seeing her around the nail salon I go to because I started going to the nail salon where she works. I wanted to know what her face looked like when it wasn’t on my computer screen. I hated her throughout our entire of our relationship. Once we were over, that’s when I became curious.

He’s the kind of man who turns all his old girlfriends into a single sentence. He likes to trap us in a moment. The One Who Always Cried. The One He Thought He Might Marry. The One Who Didn’t Like Slaughterhouse-Five. The One He Fucked in the Bathroom of a Laundromat. He turns us into plastic.

Back when were were together, I would stay up late wondering what, exactly, is too much. Now I stay up wondering what story I’ve been reduced down to or I consider how I can reduce him. What souvenir do I get?

The One Who Needed Him Too Much works at the nail salon. It was her idea to go into the dog boutique where The One Who Always Cried is an assistant manager. Just to see if she recognizes us, she said. Like an experiment, I said and she shook her head. More like a test.

The One Who Always Cried recognized us right away. She did not cry. She said, Oh, wow. You’re both here. She said, Yeah, I’m free tonight.

When the three of us are together, we try to figure out what went wrong. We develop theories.

His rising sign, says The One Who Needed Him Too Much. He’s a Virgo.

No way, says The One Who Cried. It’s his moon sign that’s to blame. Gemini.

We all agree that if his moon was not in Gemini, we would still be dating him.

We wonder how The One Who Makes Things is similar to us. We wonder if loving a person can be a similar trait.

We stare at glowing screens and text one another Did you see the bookcase she made? Did you see the hat she knit? We make promises to stop looking at what she posts, that we’ll look one last time—this time, this is the very last time. We’re so convincing when we say it. We can almost convince ourselves that it really was the last time. Then we hit refresh and we reignite everything.