The Foreign Zoo: Tour(s)ing in Place 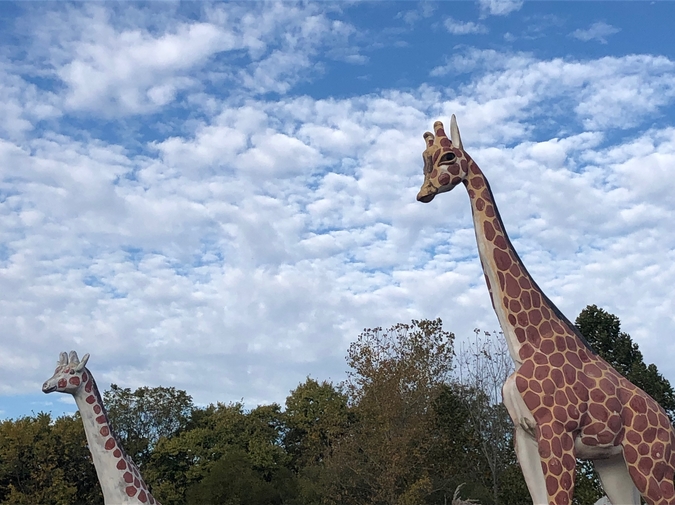 We will do anything to stay out of the University of Tours’s dormitory. It’s dirty, hot, angular, spare, and gray. La concierge grumbles when we ask for our mail. African students stuck here for summer vacation sing repetitive lyrics beat out by bongo drums until three in the morning.

But living here is far cheaper than a hotel—or even a hostel. My wife, Tia, a high school teacher, received a scholarship from the French government to take classes at the university, so she lives here for free. It costs me, for the month, the U.S. currency equivalent of eighty dollars, the price in the early 1980s of one night in a good Paris hotel, meaning with a functioning elevator fitting more than one person and baggage.

I settle into a routine. By the time we leave the dorm, the morning bus stopping to pick up campus passengers has run out of seats, so we stand for the half hour race to downtown Tours. The driver handles the bus like a Maserati, grinding up and down through gears and swerving in and out of traffic. We’re jostled back and forth through air thick with pungent body odor.

When Tia and the other scholarship students disembark, I join them, not because it’s my stop, but because I want to give them a sendoff to their odyssey through classes held in a large, Victorian mansion. I am their Penelope, waving at them from the pier as they disappear beyond the horizon.

The sun warms temperatures into the 70s. I stroll in my tattered London Fog raincoat, polo shirt, khakis, and running shoes through city streets where shopkeepers hose their sidewalk domain, then sweep with bundled straw brooms. Sitting outdoors at my favorite café, my French barely good enough to order, receive, and appreciate a café au lait, I write in my journal until the rich, ivory coffee drives me downstairs to the Turkish toilet. There I grasp the metal handles and squat over a porcelain hole while trying to direct my urine beneath me, occasionally missing my pant leg.

By the time I return to the table, someone has Rod Stewart playing on the jukebox. I record in my journal:

The battles rage between the dorm’s indigenous African undergraduate students and the interloping American graduate students, waged with slammed doors and cranked-up radios.

The taste of a Black Forest cake at a nearby patisserie.

The laundromat in Medieval Tours where a virtual United Nations of ethnic diversity washes and dries clothes together.

What the scholarship students learned in their Civilization class, that French men don’t drink milk, believing it proper only for pregnant women.

The yellow marigolds, red roses, and myriad of blue and purple flowers arranged in the town square and down the middle of broad avenues.

My reading list: James’s The Golden Bowl, The Herald Tribune, Newsweek, and a university pamphlet on Robert Frost.

Our return to campus one evening to discover spray-painted in black on the university’s entrance wall, “ICI ZOO ETRANGER” (HERE IS THE FOREIGN ZOO).

Someone begins playing a digital video game which adds points in an erratic series of deets. After two coffees, I wander down to la bibliotheque. My favorite of its high-ceilinged, silent, gargantuan rooms has windows, tall as two Ping-pong tables stacked end to end, overlooking the Loire River where dark, swift birds dart for invisible prey. Arrive early enough and I command a table large enough for most Arthurian knights to gather and situated only two bookstacks from English-written reference books.

I forage in the journal for poetic or fictive subjects—an idea, event, or image that raises curiosity, that wants looking into, that sits coyly on the fence with an expression teasing me over. If nothing prompts a new start, rough drafts get revised by listening to sentence rhythms, word sounds and nuances, plot or stanza structures reconsidered, reconfigured.

Three hours pass in fifteen minutes. Writing—and, surely, other arts—will do that. Takes you out of time, dissolves the physical world. I could be anywhere: at my desk in a northern Illinois suburb; in a cabin perched above a mile-long lake; or on a walk through a wooded Midwestern floodplain where the only sounds are birdsong and creek water flowing over the fish ladder built into a dam.

At noon, her classes over, Tia meets me for a picnic in a town square or park. The afternoons we fill with tourist traps, or, rather, tourist necessities. We visit not wineries but caves (sounds like “cobs”), our favorites in the town of Vouvray where we sample multiple varieties of their unique wine, including almond flavored and petillant—bubbly as bottles from the region of Champagne.

At night, after dinner, we plan weekend trips that come to fruition. At Cap Ferret, on the Atlantic coast, beneath a gray concrete German pillbox, a beautiful woman leaves her blanket on the beach for the surf where next to me she swims nude.

In Paris we listen to two men, looking homeless, argue in raged, raised voices on opposite sides of the station’s Metro tracks. Later, we walk by prostitutes in short, swank evening dresses leaning on a Mercedes Bens or BMW.

After multiple visits to les chateaux of the Loire Valley, we pick Chenonceau our favorite, its lovely curved supporting arches lifting the palace over the river. Inside these castles, we find tables inlaid with mosaic bones and hear about birds taught to dance to orchestral strings.

These wanderings work into the journal because at some time I want to return to them. And I do.

One day when alone, waiting for a bus, I’m approached by an elderly woman. She asks in French how to get to a place I recognize and am able to tell her which bus to take. When she boards and disappears, I realize that finally I have arrived, am no longer etranger, am no longer living abroad.

I am merely, miraculously, simply living.

Richard Holinger’s books include Kangaroo Rabbits and Galvanized Fences, a collection of humorous essays about surviving life in suburbia, and North of Crivitz, poetry focusing on the Upper Midwest, available at richardholinger.net. His poetry, fiction, and nonfiction have appeared in The Southern Review, Witness, Boulevard, and have garnered four Pushcart Prize nominations. Degrees include a Ph.D. from The University of Illinois at Chicago in Creative Writing. Holinger lives an hour west of Chicago in the Fox River Valley. He has been a teacher, security guard, stock boy, busboy, workshop facilitator, and columnist.