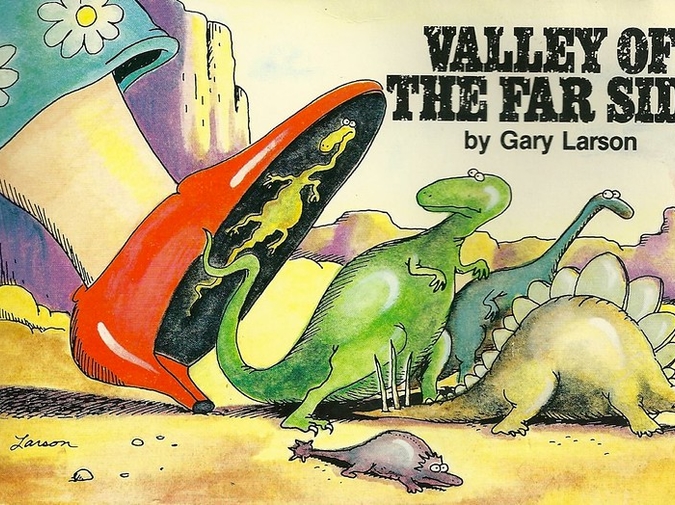 She was going up to Poughkeepsie to see a girl she had met on the internet who, promisingly, shared her passion for Gary Larson comics. She had not gone looking for love online; love had found her, and had just so happened to do so on facebook.com. But it could have found her anywhere. On twitter.com, say, or even irl.

She stared up at the Amtrak timetable which marked out the days in terms of comings and goings, all the AMs and PMs ending on odd, improbable numbers. We are always, she surmised, arriving at strange times.

Walking towards the track (12), she got the feeling she sometimes got that what surrounded her was merely a facade, merely paper-thin scaffolding obscuring the real architecture of the world. Passing the alliterative storefronts, the Jamba Juice and Krispy Kreme and Dunkin Donuts, she could glimpse in, say, the blinking D in Donuts, what was beyond it all: the old Penn Station, its high ceilings and mitochondrial activity, the roman numerals on the big clock marking the time like the pages of a book’s preface, giving the impression that all of it, every ticking second, was preliminary.

She elbowed her way through the crowd, eager to get a seat on the train which would carry her far, far away from prologue. She wore clanky mary janes and dark denim and her favorite blouse, emblazoned with a monarch butterfly.

How the train was already full, she did not know. Their bags stowed, books opened, coats folded, the other passengers all seemed thoroughly settled, as if they had been there for days now. She could only find a spot in one of those four-seaters at the end of the car, designed for friends who wanted to chat and families who could not risk even temporary separation.

Sitting alone as if she’d been abandoned by one of these families, probably for being too mute or dumb or odd looking, she began to wonder if her nerves would survive the seventy-five miles between her and that mystical-sounding place, Poughkeepsie. This traveling business gave her the confused, uneasy feeling she’d had as a child in airports, except now there was no one to carry her luggage; no one to carry her.

She attempted a deep breath but it came out shallow. She pulled her phone from her pocket and opened Facebook messenger and scrolled up to October 15th, when she had made a joke about her new haircut and the girl had responded “lmfao I love u.” She stared at the words, trying to imagine the girl’s face as she typed them, figuring she was not quite laughing her ass off but maybe at least smiling, maybe at least imagining the face on the other end of the chat and hoping it, too, was maybe at least smiling.

Everything was okay. She was glad to be on train 7305 to Albany. It was a relief, at least, to know she’d be carried in the right direction. She had always had problems with forward motion; the first steps she ever took were backwards, as if retreating hesitantly from some unseen threat. Only her grandmother was there to see it, and demanded the child be baptized immediately.

When she looked back up she saw there was a man sitting across from her. He was thin and elongated in that vaguely British way, his left leg spilling into the aisle, from which he swiftly retracted it at the menacing clack of the conductor’s ticket punch. A few minutes later the conductor came through again, this time without a clack of warning; when he saw the man’s leg in his way, he simply picked it up and placed it back into its proper compartment. He did not say a word.

She looked at the man then at the ground then at the man again. She had seen right: he was reading The Far Side. His lips were endearingly chapped, his eyes were beady like a cat’s; he was perfect and un-digitized and hey, look, they were already in the formal position of two people out to dinner.

She was disgusted at her disloyalty and yet, this being one of the only moments in her entire life she had felt genuinely compelled to action, found she could not let this impulse die.

“I love The Far Side,” she said, pointing at the magazine.

“This is the quiet car,” he said, pointing at the sign.

As the train lurched forward, she realized she was facing backwards. She was likely to be sick.