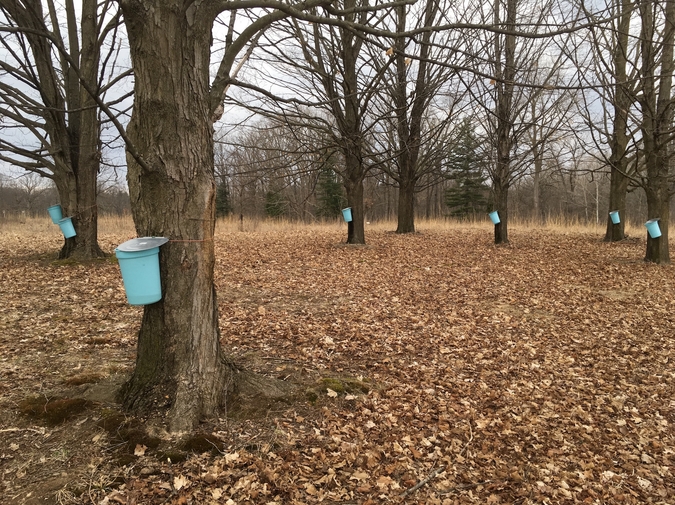 From the time I was seven until I started taking Seroquel, an anti-psychotic, I had this unending feeling of doom.  ‘My go to’, be that of death. It started with a stranger under my bed with a knife. My chance of making it through, till I fell asleep, depended on which way I lay.  I could not lie on either of my sides and I could not lie on my stomach. It had to be on my back. I made it out alive. I then started witnessing nobody around corners with ropes and chains strangling me from behind, dragging me down dark alleys.  I saw me hurling myself off bridges, over cliffs, and into raging rivers. I then started catching myself hearing a muffled voice. The first time I heard it I was doing my paper route. It was very early in the morning and there was no moon to guide me.  I specifically remember asking, “Did you hear that?”, but no one was around.

The season of fall had always seemed romantic to me.  Not romantic in a starry eyed kind of way, but a Sylvia Plath, The Bell Jar, kind of way.   My AA sponsor uses the word glamorous, I use romantic. Regardless, they are the same. It propositions some sort of yearning, pulling me closer, tight, telling me sweet nothings, come back, despite the suffering and pain.

I’m sitting here watching the yellow leaves fly off the tree outside this library window.  I could say that it is the most compelling, most beautiful thing I have ever witnessed - this moment.  And it is.

Fall used to be my favorite season. I loved the fall, the colors, the nostalgia, the change of wind, the holidays, death.   Along the way I acquired an impression that evolved people preferred the season of spring over fall. I didn’t want to be known as one of those who weren’t.  I thought if I said I loved the season of spring the most that I was presenting myself as if I was renewed and rebirthed. I thought if I said I loved the spring the best I would learn to believe it.  I could make myself relive, be rejuvenated, and rewrite everything. (I used to make up words with the prefix ‘re’ just for this purpose.) I forced myself to acquire affection for the season of spring to save face.  I started associating the season of fall with the glass half empty. Or maybe, I associated the glass half empty with the season of fall. I love spring. Spring is my favorite season. I love how it manufactured life for me all these years.

I just looked on my bottle of Kombucha by GT’s and there are ‘re’ words written all over it:  reawaken, rebalance, reimagine, repurpose, rethink, rekindle, reinvent, redefine, reclaim, recreate, recapture, rediscover…

I went to an art show once and met a photographer who took photos of things like rotten fruit, dirty and disheveled gadgets and dead things.  I told her how I appreciated her take, “that you don’t see that much”. She told me thank you, “I don’t meet many people who appreciate it that much”.  The first photo I entered in a contest was of a tree that had fallen and was split in two, wide open with colorful fall leaves strewn all over it- like a hairy naked woman waiting for someone to fall on top of her.

I had no idea what I didn’t know.  Like the first time I entered ‘the most creative’ birthday card contest for our local zoo elephant that had just turned 1.  I underestimated the caliber of others and I over-emphasized the quality of mine.

A good eye.  What do they mean exactly when they say that someone has a good eye?  My mother used to tell me I had good taste. She referred to that when she asked me to pick out one of two outfits, for instance, from a clothing store, or one pair of shoes out of two.  From her retort and that comment, I guessed good taste was a bad thing and that I had picked wrongly.

My mom has cancer.  She is going to die.  She is not only old but she likes the season of fall better.  I struggle to like my mom. I like to rationalize it by saying its mutual.  I had a friend tell me once how obnoxious it was when women bad talked their mothers.  Just another thing I wonder if I need to save face about. Just another something I may have to force myself to think differently about.

I believe I split off a long time ago.  I believe my split created a rift and I disjointed myself.  I believe I learned to desire it, finding it romantic and creative, making the sad songs seem sadder and my wildness woefully wonderful.

I entered this piece in a writing contest years ago.

Under the prodigious maple tree on a brisk fall day, Carl and I played.  I was five and he was three. I pushed him backwards and watched how his smile turned upside down, how his chest and shoulders caved and tears welled in his eyes.  I scooped him up and squeezed him tight, to discover his sweet smile yet again and his hug in return. I was partially conscious but curious and pushed him back again, watching his eyes in disbelief, his chest and shoulders heave and his smile curl and quiver.  I pulled him forward, snuggled him lovingly, and watched how his smile returned with unease. I looked toward the kitchen window to make sure she wasn’t watching. Telling myself one more time…I proceeded to, but I stop. I couldn’t bear to watch his body shake or witness his disbelieving eyes; so I turned away, but not without nestling him up with my detached arms, severed head and splintered heart.

I am reading The Handbook to Higher Consciousness by Ken Keyes Jr.  He states that, “The consciousness of an infant does not grasp situations and churn them with the rational mind”.   I just looked up the definition for rational: endowed with the ability to reason, as opposed to being governed solely by instinct and appetite.  I definitely can see my ‘instinct and appetite’ playing a role in my behavior back then, but solely?

I wonder if I should tell my mom that I am attracted to taking photos of dead animals, what I did to my little brother, that fallen trees look like naked women to me and that good taste is merely relative?

I wonder a lot about reincarnation.  My friend Claudia believes in it and thinks homeless people are paying back their karmic debt faster than the rest of us.  At times I used to think I was paying back my karmic debt by little spurts of seeming growth, doing good deeds, or humility.  I don’t think about my karmic debt anymore. But I do wonder why death has seemed to follow me. Maybe it’s because death preceded me.  Maybe I lost some brutal gladiator fight in 401 CE or played Russian roulette one too many times or maybe when I emerged from the water in the first portion of an Ironman competition I dropped dead.  Probably. All the contests I’ve ever entered I’ve lost.

That’s not to say that I’ll keep losing.  Fall is here. Death is coming. And then spring.

Margaret Sherwin is a freelance writer and a professional pursuer. When she isn't trying to acquire that ultimate job, she is practicing on changing the neural pathways of her mind. A believer in therapy, treatment, and sharing—with little filter, she realized she was still full of it. Being in her head most of her life, she decided to let it out on paper about nine years ago writing a nonfiction piece for The Midwest Writing Center's Iron Pen Contest in which she won 2nd place. Entering the writing contest every year, Margaret won another 2nd place prize a couple years back, and finally achieving 1st place in 2019. Neural plasticity is existent! Iron Pen is a 24 hour writing contest in which a prompt is supplied. Lately, Margaret has been trying her hand at poetry. Inspired by Ta-Nehisi Coates, she loves the notion of saying a lot with very little.