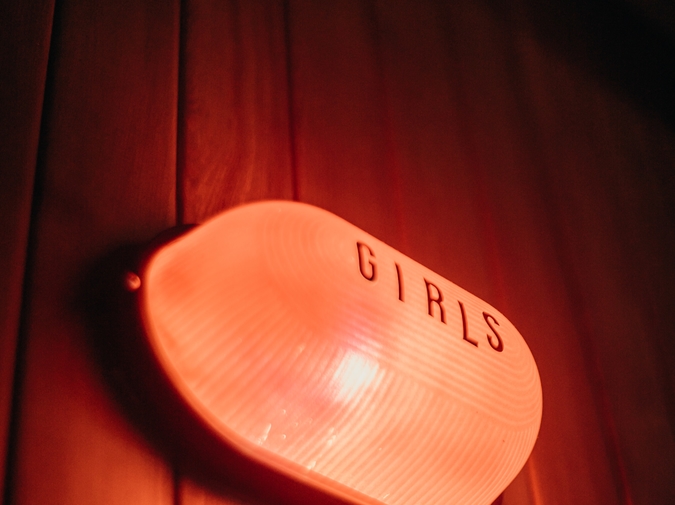 I painted my lips and fingers red the first time I was unfaithful. It was in college, with a girl with sharp orange hair who had a smile that said come. I never really liked her--she was arrogant and cruel but so attractive she made the spaces between your toes sweat. She was the kind of person all the girls wanted, so when she wanted me I fell into her bed mostly for the story. Then I fell again, a month later. This time, the adrenaline was to blame. When I confessed all this to my boyfriend, he shook the car so violently I thought I would be sick. We broke up. I went out and bought red lipstick and red polish. I began to color myself in.

One morning I woke with brick red hair. I left it, thinking, well, now they know what they’re getting. I was that age where most of my friends were settling into long relationships, but I kept falling from one to another, unable to stay true. “You just have to find your complement,” my friends said, “The one who balances you out.” Because in part, I wanted what they had. I wanted marriage and love, but I also wanted affairs on trips to foreign countries. Work conferences that ended with kisses and goodbyes. Adventure and flirtations and chemistry that beat like a drum.

Still, I was faithful in my first marriage. But at our wedding, I felt a spasm of panic. I was happy, but what if a better adventure came along? Can I love you now and leave you later? I almost asked. And yet, I never fell. But every day I had to fight the screws in my heart that said run, run. The lovers I wanted were everywhere: girls with tattoos and rosy lips with strong arms and messy hair who shot me that shiver of electricity when I knew—just knew—one wanted me. When our marriage was over, I kept insisting, “I was true, I was true.” My wife laughed and said, “Only in body.” When our marriage was over, I began to dress only in red.

For a while, I stayed single. Travelled abroad. Learned to box. Tried to burn myself out on lust. That’s when I met the second woman I would marry.

She was older, and used to fly planes, and was as steady as a river stone. She had grass-green eyes and a sage-green Subaru. She had a partner, too, who I hated instinctively. So instead of a lover, the woman who used to fly planes became my best friend. She joked at my conquests, and bought me lettuce and leafy greens, and believed I would find my complement. “She’ll be the best adventure of them all,” she assured me. Once, she took me to the flight museum. In front of an old fighter plane, she told me how she’d been so lonely in the Army. “You have no idea,” she murmured, and reached out reflexively for my hand. I had to go hide in the bathroom and cry. For a whole year I yearned; my conquests died away. And when she came for me I thought, well, now you’re a fallen woman too.

I wore white at our wedding. I was so excited I nearly tripped up the aisle, and the woman who used to fly planes ran down to catch me. “Don’t fall,” she laughed. She wore her mess dress greens, her hair tucked back in a ponytail. We said our vows. Exchanged rings. Thought we had glued ourselves together by the lips. But during the reception, I noticed the ends of my dress turning red.

I painted my body red after the man with moppy hair and tender eyes which lit like a match whenever he saw me. I relapsed on his desire, but in the end felt nothing. It was more habit than pleasure. Maybe that makes it ok, I reasoned. The woman who used to fly planes did not agree. So I bought a bucket of paint and swept large scoops of it across my collar bones and thighs and bottom of my feet. And when I finished with my body, I kept going. I painted the couches red, then the bannister up the stairs, then the walls of our room.

Hester Prynne. The Red Light District. The girl from that Police song. People associate lust with red. They also associate it with women. To them, lust is red because it is passionate, and sinful, the color of blood a woman bleeds. But I think that lust is red because it is the color of blood that comes when you stab someone in the throat. The color of fever in your lover’s eyes when she is filled up on betrayal. The color of walls in your empty room, when she has left you all alone.

Soon everything I touched turned to red—the quarters in my hand, the dog I petted at the park, the shoulder on which I rested my head. I placed my palm on the kitchen floor and out wound a river of red—it bled out from my house and down the drive, then to the street, then to all the other houses on my block. Red pooled in my footprints and spread outward, painting up the sides of schools and telephone poles and billboard signs. Only the grass resisted—the grass, and the trees, and our sage-colored car, and her mess dress greens I brushed by in the closet. I went and found the woman who used to fly planes. I asked for a second chance. She told me, “You weren’t true,” and I said, “Only in body.” I handed her a bucket of green paint. “You’re my complement,” I said, “My best adventure.” Then she colored herself in, too.

Madeline Furlong is an MFA candidate in Creative Writing at the University of Illinois at Urbana-Champaign, and a graduate of Wellesley College with a degree in women's studies. Her fiction has been published in Oyster River Pages. A proud native of the Pacific Northwest, Furlong lives and writes in Seattle. You can find her online at madelinefurlong.com or instagram @madsmooo.