The Cage Beneath The Stairs 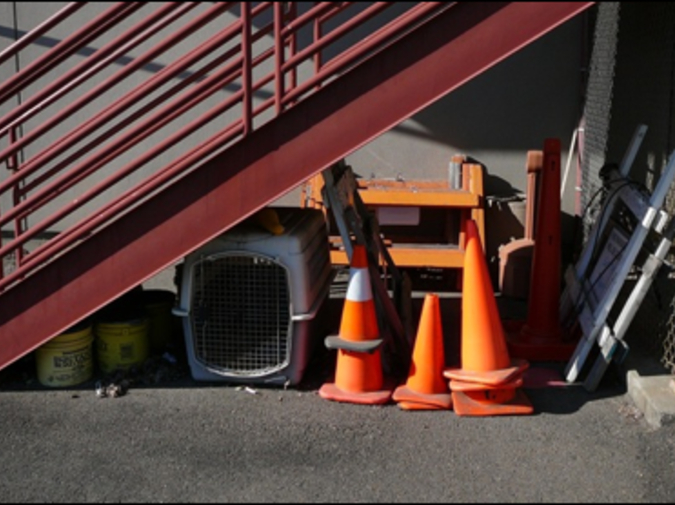 [The following text and pictures are taken from the personal website of my brother, Austin Hinderliter. It includes all posts made from April 25 — May 6, 2011. —Robert]

As I walk to and from work each day, I pass through a number of outlying facilities of Oregon State University. Behind one of these old concrete buildings, underneath a red stairway, is a cage.

I have passed by this cage for months and always wondered what sort of creature it was meant to hold. I have never seen it occupied. It is big enough to easily house a dog, but there is a layer of wood chips on the cage floor, which suggests some kind of rodent. The wood chips never seem to be spoiled. Also in the cage is a bowl of water that is almost always full. A closer view of the cage

One day last week as I was walking to work, I noticed that there was a giant yellow squash resting on top of the cage (see picture above). It seemed an odd place to leave a squash. Several days later, it is still there.

I find myself looking forward to the times in the morning and late afternoon when I walk by the cage, hoping to be given some clue as to the nature of its existence and the meaning of the squash. Some days the water has been refreshed, a new layer of wood chips added, the squash resting at a slightly different angle. I’ve started feeling disappointed, even angry, if the cage and squash are exactly as I’ve left them the day before. At work, I’m constantly checking the clock and counting down the hours until I can walk by the cage again to see if anything’s changed. I told Samantha about all this, but it doesn’t interest her. She says that whatever the cage is for won’t make a lick of difference in my life, and tells me not to get so worked up about it. She’s probably right. But still...

Yesterday after dinner a compulsion gripped me (anyone who knows me knows I’m prone to compulsions), and I set off in the direction of the cage. I found a spot behind a nearby cardboard recycling bin and crouched behind it, waiting and watching.

It began to grow dark. The night was unusually warm. I listened to the Blue Nile on my iPod.From a late night train...reflected in the water...when all the rainy pavement...leads to you. Two college girls bicycled by in jean shorts, showing miles of thighs. It reminded me how long it’s been since I’ve touched a woman. (Samantha, pretend you didn’t read those last two lines!)

It had rained the day before, and I sat on the ground behind the recycling bin breathing in the faint odor of wet cardboard. I waited for what seemed like an eternity. The cigarettes, the magazines, all stacked up in the rain. Slowly, I began to experience an inexplicable fear that I was rapidly growing old, that if I could look into a mirror I’d see my skin begin to loosen and sag and my hair turn white. It’s over now...I know it’s over now...but I can’t let go... I turned off the music and tried to shake the disturbing thoughts from my head.

The night had long taken on its full darkness when I finally saw movement near the cage. The door at the top of the red stairway slowly opened, and a man emerged. I could see from a light on the side of the building that he was middle-aged, with long unkempt hair and a round gut filling out a white t-shirt. He was holding a pitcher of water. I remained perfectly still as he glanced around before descending the stairs.

When he reached the cage, he unlocked the door and filled the bowl inside with water from the pitcher. Then he took the squash and set it inside the cage, closed the door, and sat down on the ground. He was about twenty feet away, and I could hear him talking quietly, although a slight wind kept me from understanding the words. I got the sense that he was speaking gently to something he thought was in the cage.

He sat there for almost half an hour, and I sat behind the recycling bin and watched him. Eventually, he stood up, took the squash from the cage and put it back on top, locked the door, and climbed the stairs and entered the building. I sat for a few more minutes in case he returned, and then I rose to my feet and walked forward to examine the empty cage. Clean wood chips, fresh water, and an untouched squash resting on top.

That night, I dreamed I was walking down an alley that never came to an end. Crumbling brick walls as far as I could see. Slowly, though no desire of my own, I began walking faster. Before I knew it I was running, splashing through puddles and hurtling past dumpsters, careening down a narrow and squalid path with no end in sight.

As I was walking home from work yesterday, I saw a police car parked next to the Cage (the capitalization feels appropriate, for some reason). Two police officers were standing by the car and talking. They were looking at the Cage, and one of them gestured to it and then to the door at the top of the red staircase. I crouched in the shadow of a building twenty yards away and pretended to tie my shoe. Neither of them looked in my direction. After a couple minutes, the officers climbed the stairs and entered the building. The door at the top was unlocked. The police have shown an interest in the Cage

I moved forward to take this picture, and then I approached the Cage. It was just as it had been when I walked past it in the morning: fresh wood chips and water, the squash resting on top, its skin beginning to wrinkle. I returned to the shadow of the building and resumed my crouched position. If the officers saw me when they came out of the building, I would finish tying my shoe and continue walking.

After less than five minutes, the officers emerged from the door and descended the staircase. One of them was laughing, the other shaking his head with a serious expression. They didn’t see me. Before returning to their car, both men glanced at the Cage. They drove away, and I walked home.

Later that night, I jolted awake from a dream I couldn’t remember. As I tried to fall back asleep, I could think only of the unlocked door at the top of the stairs. Tried to call Samantha. No answer.

I have opened the door at the top of the stairs. I need to collect my thoughts. Will write more soon. At the top of the red stairs, a red door

Samantha, are you reading this? Robert? I feel as if the world has turned upside down and shaken me loose from it. Behind the red door: [Since this time, Austin’s website has been inactive. Attempts to contact him by phone and e-mail have been unsuccessful. Austin has long been a recluse and struggled to find employment and form friendships. The rest of the family was not aware that he was currently employed, so we are unable to contact his workplace. If anyone reading this has any information on his whereabouts, or knows who this “Samantha” individual may be, please contact me immediately at r.hinderliter@gmail.com. Austin, if this message somehow reaches you, please call me or Dad and Shelly immediately. We are concerned for you, and we love you. - Robert]

Robert Hinderliter's writing has appeared in SmokeLong Quarterly, decomP, trnsfr, Pear Noir!,and other places. You can read more of his work by visiting his website: http://roberthinderliter.wordpress.com.