THE ANSWER IS, PROBABLY NOT 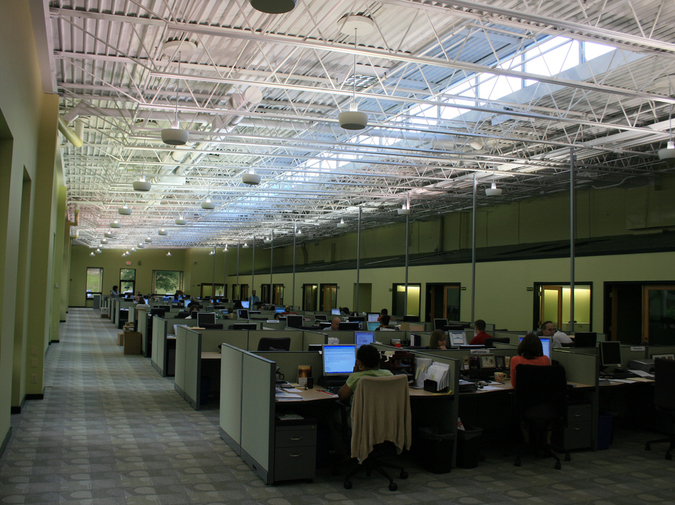 Why is this office an open, collaborative workspace? In the open office, everyone has questions. Now you have questions. Why won't Jill (to your direct left) turn the volume down on her computer? Why won't Rogier (pronounced, Roge-ay) let you open up the window shades? Will your two succulents — which you named Coutinho and Neymar Jr. after the recent World Cup — die before the end of Q3? You printed off jerseys and taped them to the pot of each succulent. Coutinho is a cactus succulent in a square pot. Neymar Jr. is a cactus succulent in a round pot. “I get it,” Dixon said. “Neymar, because he rolls.” Will you be able to sneak-watch the Manchester United and Leicester game this afternoon? Who will win the Premier League this season? Why would anyone from Kansas name their child Rogier? What would Jill’s response be if you reached over and turned the volume down on her computer? Should you do it? Should you do it now? And why does the whiteboard on the left say “NBZT Trade Show Countdown! 67 Days!” and the whiteboard on the right say “NBZT Trade Show Countdown! 71 Days!”? (Are they two separate time streams?) Will you make it to the end of the day without ordering noise cancelling headphones off Amazon? BEEP-BOOP; email bing. “Everything intertwines,” Rogier said in earnest. Reset.

Add a pair of Bose QC25 noise-cancelling headphones to your cart. Cringe at the price. Is silence worth it? Why won’t Jill wear headphones when she watches a B2C email advertising tutorial video on YouTube? And what parent from Kansas names their son Rogier? It’s like watching a bodybuilder sculpt a porcelain pot — the slow vertiginous realization that, hold on, this shouldn’t be happening — though you haven’t been to Kansas in ages, so maybe things are different now — BEEP-BOOP; email bing.

Other people around the open office have questions of their own. Did you align with Jill? That was Phil. Do you have some time today to talk about it? Could we set up a meeting later this afternoon, maybe? Do you want to do three to four? With the names, right? Did we get back to them? Is the metric still there? Will you copy me on that? Is this the guy? You're kidding, right? Have you eaten there? Was it good? Your thoughts? For the speakers? How many speakers do we have? Ten? External speakers? Are we going to do branding? Do we have anything that we can share with them that would help them understand? Phil? Could I interrupt you?

Norris Eppes’s writing is published in The Surfer’s Journal, Newsweek, Bitter Southerner, and elsewhere. He works on staff at the Sewanee Writers’ Conference, received his MFA in fiction from the University of Tennessee, and was editorial intern at the Sewanee Review.