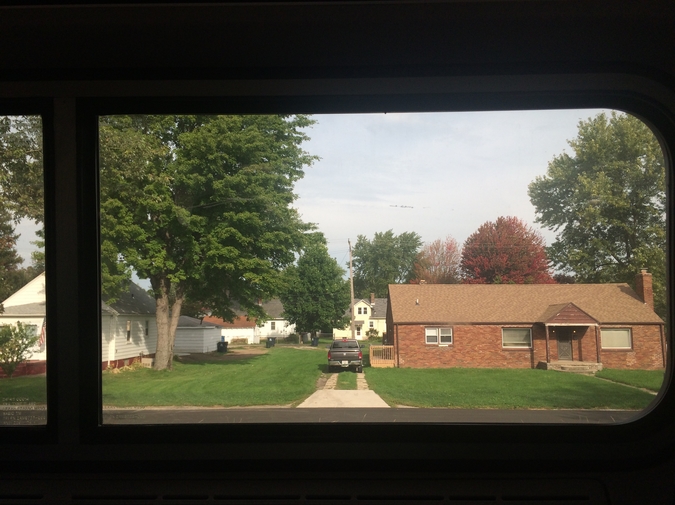 Married twenty years today, Heather and Vic play that game. After dinner, in their California King. With the lights off and no TV on because: special occasion. Where they take turns confessing things one might not know about the another. How Heather once French kissed her second cousin. Or Vic fooled around with his roommate in college. The threesome she had with those football players, linebackers from a visiting team she can’t remember. The time he saw his childhood neighbor making love to a cow. Had Vic told her about the cow already? Well she’d told him about the football players, too. “What else?”

The game goes into a dying fall. With the realization they’ve traded these stories before. And what’s worse? Had forgotten doing so. The forgetting and the remembering now just one more pattern they’ve fallen into. Like the annual trip to the Italian restaurant, Vic’s gift of antique jewelry, or Heather’s blue velvet blouse. The extra glass of wine to prime themselves for the lovemaking to follow. Tedious now. Everything just another beat of the same.

Not to mention, Vic badly needs to urinate. His bladder full of celebratory wine. But refuses to get up to relieve himself out of the fear Heather will turn on the TV and return them to their usual routine. Which, paradoxically, is all he really wants. And he hates himself for this: wanting to urinate and watch TV instead of make love to his wife of two decades.

Did she remember when he painted that old General’s lake house up in the Adirondacks? That friend of a friend of her mother’s? When he had to camp out in the yard and bathe in the lake because the General wouldn’t let him inside?

That humid summer they sunk their money into fixing up that rotten bungalow? And they thought Junior had Lyme Meningitis?

“I said I remember.”

“I’m sorry,” Vic says. He just wanted to put the story inside its proper context. Without the proper context, she might misinterpret what he’d done. Might not forgive him.

Most of that day, Vic spent touching up. Knocked on the General’s front door around noon, expecting to be paid. But instead of the check—which the General made a point of writing out in front of him—was handed a punch list full of bitchery and tedium: slightly jagged lines he’d cut, hairline cracks uncaulked. Lead paint chips in the unkempt gardens.

So, a couple hours later, after ticking off each item, he knocked again. Once, twice, three times. No answer. Which was weird because every other time the General had opened the door like he’d been guarding it. Now he was nowhere to be found.

Cheap bastard, he thought and tried the handle. Which to his surprise creaked opened onto a foyer from which a dark hallway branched. After making his presence known, he then stepped into the house, walked down the hallway until giving way to a high-ceilinged living room flooded with dusk. Still, he remembers the way the woods burned through every window. Still, the way the General sat there in a bathrobe, his white hair appearing to burn, too as he watched TV with these enormous headphones cupping his ears.

“All finished,” Vic said now stepping forward into the General’s line of sight. He waved a hand and waited to be noticed. Waved it faster. Wilder. “All finished!” he said. Yet he couldn’t seem to capture his attention. The old man seeming to stare right through him. Softly. At something else. Until, suddenly, the General’s eyes sharpened, focused into an accusatory glare. As if he’d caught Vic mid-burglary and was about to leap to his feet, dispatch a series of ass kicks.

So, imagine his surprise when, instead of berating him, the General removed the headphones, offered a dentured smile. “From such a dour man, I swear to God, it felt obscene!” Vic says. The way the blue TV light played on his teeth as the dusk burned like neon in his white hair. The headphones whining in his lap. The mosquitoes the sound conjured, the ones that’d plagued him all through that dreadful week.

“Cynthia?” the General said and squinted and peered up at him. “Honeybee?”

“It’s Vic,” Vic said. Embarrassed for this old man. Who probably fought in WWII, some fascist regime. A decorated man of honor. Figuring he must’ve been napping. Coming sweetly out of a dream. About his dead wife, an old lover. A dear friend. Back into the cold harsh lonely of his life. Because if there was a wife or lover or friend, Vic hadn’t seen her. No one had come or gone from the house all week. “All finished,” he said.

Nevertheless, the general persisted. “Cynthia? Cynthia? Cynthia? Honeybee?” he said. Until, unable to take any more of this, Vic walks over, turns on the light to rouse the General back to his senses.

“Cynthia!?” the General said again. But different now. Not so sleepy looking anymore in the light. But alarmingly awake. While his face remained peaceful, the rest of his body appeared rather taut. Straining. Sweat pearled on his bare chest and forehead. The chords raised in his neck as if attempting to lift the slack peacefulness of his still-smiling face back into its usual scowl. “Pudding cup!?”

Now it became obvious to Vic that something had happened to the old man. Was happening to him. Internally. Something dire. And Vic rushed to the landline. A rotary phone fixed to the wall. He turned the dial to nine. To one—

And it’s here, Vic wants Heather to remember their financial hardships at the time. Their fledgling real estate business, his renovations on the bungalow. Junior, their fragile little boy. How he’d been bitten by that tick and couldn’t put his chin to his chest, the infection working up his spine. The real possibility of losing everything. Wants her to remember this, all of this, when, instead of turning the rotary dial one last time, he placed the phone back on the wall.

Could she remember? Did she understand? Heather didn’t say one way or another. Her expression, hard to read in the dark. Well, anyway, Vic continues, at this point, upon returning to him, the General’s eyes closed. But behind their wrinkled shells, however, they continued rolling. So, he shook him. “Wake up,” he said and shook him again, hard. “I’m going to help you. But I need you to pay me.”

Now the General’s breath rasped in, out. “Please,” he said, still shaking him. This dying man. Shaking him and pleading with him more. Until, suddenly, a floorboard creaked, tore his gaze up after the sound. Half-expecting to discover the old General’s wife, Cynthia. To find her standing there in her robe in the dying light, trembling. Afraid for her life. Accusing him of killing the man, attempting to burglarize their home. “Cynthia?” he called into the house. No response. And when he looked back, the General had stilled. Found peace. His eyes no longer moving. The headphones still whining in his lap. Dead.

After this, the first thing Vic remembers doing was shutting off all the lights. Powering off the TV whose light still played on the General’s face, giving the impression of coming back to life. Despite there being few neighbors. As the dusk transitioned into night. On the off chance they caught him as he stalked about the house.

He started with the drawers, moved to cabinets. Then went back through the drawers again. Finding nothing but bills and silverware, he moved through the kitchen closet, the coffee table. Shaking out the few magazines neatly stacked there. Then, exhausting those options, he moved to the General himself. He had no choice. Remember? Their predicament back then? The check, he’d thought, must be inside his pocket. When he reached, he realized the General had soiled himself. He still remembers the way the order wafted up, sweet and fetid. The empty pocket. The invisible mosquitoes that buzzed around his neck. Removing his hand to slap them.  Then cursing softly and looking around the dark house. “Cynthia?” he said again.

No, of course Vic didn’t want to go upstairs. Didn’t even intend to, really. Until, then, suddenly, he was. Tiptoeing up the stairs, looking for that check. Or, okay, he’ll admit it, maybe something else now. Of equal value. To bring home for them. For his family. Jewelry perhaps. Antiques. Bond certificates. He didn’t know what. Just that he—they—needed the money.

Remember? As he continued upward, he certainly did. Moving carefully up the steps so as not to release any of the noise they held. Down the bare hallways. Toward the bedrooms. To see what he could find. “Ok, fine, steal,” he says. “Are you happy? Steal from a dead man…”

Did Heather even want to know what he’d found? Did she want to know why he’d kept this from her for so long? He looks at her, trying to read her expression from across California King. A smile? He didn’t know. It’s still too dark. Had he told her this before? Did she not find the circumstances as damming as he thought?

In this way, her movement toward him made no sense either. Disorient him. Accompanied by a slight jingle from the bracelet he’d given her as an anniversary present, she reaches for him. Touches his face. Finds his mouth. The same as always yet alien with passion. Her body rending differently also. Through the dark. Her blue blouse coming off, being thrown off the bed. Her body on his. Hot. Made different with fervor. Someone else.

“Pudding cup,” she says, shoving her index finger into his mouth.

Afterward, Vic rolls off her. Maybe embarrassed but also satisfied. Happy to have revived something in separating themselves enough to come together again. Spark that initial spark through his morbid story. As he continues this roll, stumbles off toward the bathroom. Over their cast aside clothes and shoes, wondering how long the feeling might last. His fingers dusting the wall. Bang! He stubs his toe on the TV stand, curses softly. On account of the pain but also at the realization: what other stories were they to tell? Disoriented from sex and wine and storytelling, he trips again. Curses louder now. Too afraid to ask Heather to turn on the TV or bedside lamp. The condition he might them in once the room went bright.