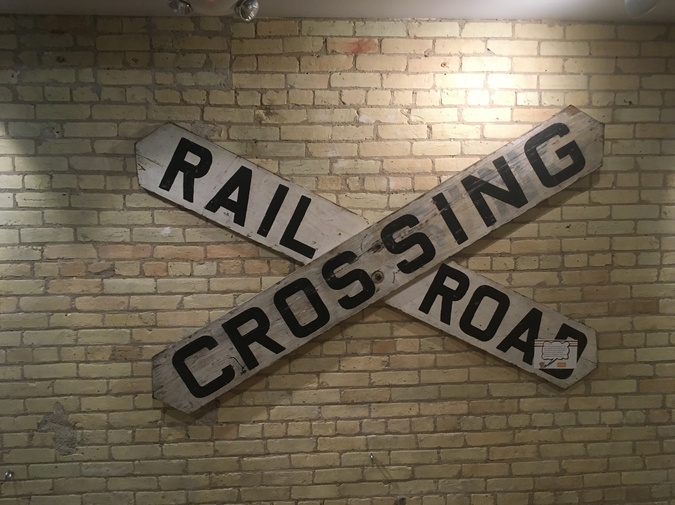 They walked along the railroad somewhere in Atlanta on a cold and bitter night, the full moon above them like a yellow coin some unforgiving God had tossed far out into the galaxy. In the near distance, Christmas lights decorated storefronts, a startling contrast to dark alleys and streets.

The dusky-skinned woman was so petite she might have resembled a child from a distance, but up close you could see that she was at least in her forties — her thick curls were streaked with silver near the temples, and her eyes, thick-lashed and startingly green, were enhanced by fine wrinkles. She wore a lavender 1970s shift dress, matching shoes, no coat. Her gait was steady, her gaze rarely straying from an invisible point up ahead.

The man was tall and largish. He wore a dusty suit and carried a medium-sized briefcase. His skin was startlingly white, his hair so blonde it shone in the dark. His brow was deeply furrowed, the gray eyes beneath them despairing.

The sound of laughter and humming engines occasionally reached them but were unacknowledged. The husband and wife were intent on reaching the destination that had been awaiting them since their murder some 60 years before. Indeed, the memory was still very much alive, a root that had imprisoned their souls  — look, here’s the white stranger, his eyes maniacal, his hair long and gray, his hand wielding a rifle. Here’s him killing their baby girl in her sleep. Now, here he is coming after them, chuckling at their screams, his words like hissing bees: You should have known better than to go marryin’ her, you fool of a man. And you, you whore woman, you tempted this man here, didn’t you? He shot them right in the face, his grin wide and satisfied.

Their baby girl was waiting for them on the other side of this world, but they followed the murderer as he traveled across Georgia by car. His rage was a ravenous tornado — he snuck up on families in the night, watched until they’d gone to bed. The husband and wife ushered these confused spirits through with the sweetest words they could manage. Here’s the paradise you always deserved. There you go now. Love is plenty there.

Eventually, they found out his name was Tom. Children and dogs ran from him, sensing his rabidity. His two children, daughters, had long since moved states away, refused to pick up his calls. The police sniffed around his place sometimes, but they always left, satisfied the man wasn’t doing much more beyond getting drunk every single night.

Then a black man, bless his soul, shot Tom point-blank in the chest after finding him in his backyard shed. He didn’t go to jail either, knew well enough to bury the man in a remote area where no one ventured.

The husband and wife didn’t stop there though. They kept on helping souls through, showed them there were two ways to leave this dying earth — the first, through the clouds just as the sun was rising, and the second, through the earth itself, a womb that swallowed them and passed them through to the other side.

No matter how many people they helped, the deaths didn’t stop, not even when a new century came and went with its rosy cheeks and promise of rebirth. There’s a young black woman, her hair long and lustrous, strangled to death because she was born a boy; there’s a little girl, her skin like dark chocolate, dressed as an African princess, out trick-or-treating when a stray bullet lodged in her chest; there’s a man with cheekbones like polished ebony, reaching into his pocket for his phone when a policeman shot him.

One day the wife sank to the ground in a forest and rested her cheek against the soil. She spoke, a whisper. We have to go home and join our baby girl, or we’ll be trapped here forever. This earth, it ain’t going anywhere anytime soon, and we gotta stop sometime, give ourselves a chance to just be.

Meanwhile, the man picked up the velvet pouch resting at the bottom of the suitcase. He pulled out his wife’s bones and arranged them at the foot of the maw while his wife climbed in, baby still cradled against her chest. Soon, the man joined them. They covered themselves with dirt, their hands reaching until Atlanta disappeared and so did the world with its strange beauty and rotten shadows.

Juliana Crespo’s work has appeared or is forthcoming in North American Review, Hobart, PANK, Literary Orphans, Ruminate, and Fiction Southeast, among others. Originally born in Rio de Janeiro, she is now ironically a high school English teacher in Bloomington, Indiana, where she also lives with her family.