Still, It Was Baseball 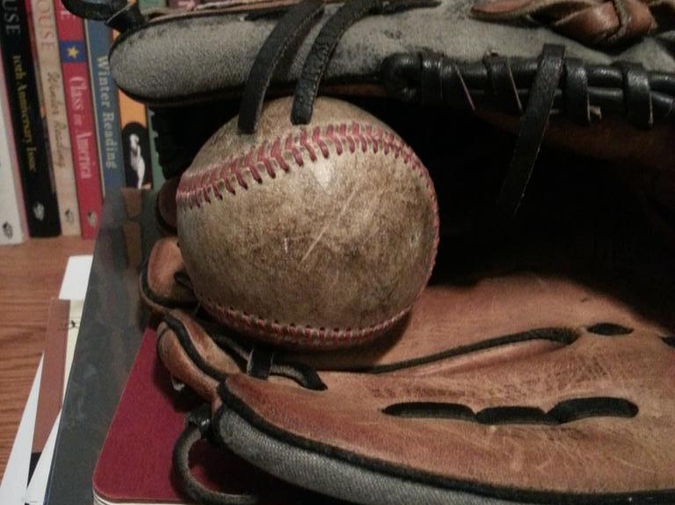 Pregame notes: You could tell Heather was a catcher by looking at her thighs, but she brought an infielder's mitt to the game that day. I was thrown off when I saw it sitting there on the passenger seat of her old Subaru. I just couldn't picture this girl ranging to her right to field a grounder. "What the hell are you waiting for?" she said, laughing. "Just throw it on the floor and get in." I did, and the glove coughed up a little cloud of dust that enveloped me as I settled into the vinyl.

I was nervous. Heather was two years older than me and three inches taller, with a blonde ponytail and vaguely threatening eyes that were the reddish brown of a warning track overcome by shadows. We'd been flirting for weeks and I still couldn't figure out what she saw in me, but when an older girl with her own car approaches you after freshman baseball practice and invites you on a date to see the Mariners play the Tigers, what choice do you have?

We were on the freeway when she grabbed my hand and put it on her leg. I wasn't sure what to do, so I started babbling about the team's prospects for the nascent season. Randy Johnson was a can't-miss freak show, and of course there was Junior, but the team was still destined to lose a hundred games, I said, because losing is what the Mariners do. Heather played varsity softball, she knew her stuff, but she was more interested in what I was doing with my hand, which was not much. I was hopeless, a virgin with damp palms and skin problems. I panicked. "Can we listen to the pregame show?" I said. I reclaimed my hand by pretending to scratch an itch on my arm. Heather smirked.

We held hands and walked toward the Kingdome, the massive concrete pustule in which the Mariners played their first twenty-two seasons. Baseball in the Kingdome was to baseball in a traditional outdoor ballpark what Oasis was to the Beatles. That is to say it could be entertaining, even exceptional at times, but it lacked the spiritual velocity of the original. Still, it was baseball.

Through the turnstiles, up the undulating ramps, we climbed toward the 300 level. "We can move down behind the dugout later," she said as we took our seats. "But I wanted to show you something up here." The crowd, as usual, was sparse. You could see tens of thousands of empty red seats in every direction. Big blue tarps were draped over entire sections of unsold seats. I watched Randy Johnson, improbably tall and mulleted and potentially malnourished, throw his warm-up tosses. I thought about the pocks on his face, how I used to wonder where they came from before deciding it was better not to know. Then it was time for the first pitch.

Top first: Tony Phillips led off the game with a home run. Heather leaned over and kissed me.

Bottom fourth: With a man on, M's first baseman Greg Pirkl deposited a poorly located fastball into the left field seats. 2-1 Mariners. "Come on," Heather said, dragging me by the hand down the aisle as Pirkl rounded the bases.

"Just come on." We walked two sections over and waited until the usher guarding the entrance turned his back. Then we ran past the rope, climbed the stairs to the top of the empty section and crawled beneath the blue tarp, all the way to the middle of the row. The light beneath the tarp was blue and diffuse, and the sounds were muffled, like we were laying at the bottom of a river. When we crawled back into the dome's pale light I was no longer virgin.

Bottom sixth: Back at our seats, the game was tied at three. "First time?" she said.

"Was it that obvious?" I said. Jay Buhner stepped into the box.

"I don't know," she said. "It was my first time too." I looked at her incredulously. Buhner took an outside fastball. Heather shrugged. "My family is moving to Nebraska. I wanted to get this out of the way before I left. Gain some experience, you know?" I was speechless. Buhner fouled off breaking ball. "Dude," she said, lapsing into dugout vernacular. "Lighten up. You just got laid." I smiled meekly. "There's nothing sad here," she said. "No strings. I just wanted my first time to be unique, okay? On my terms."

"Because I like you," she said. "You're sweet. And safe." She gestured toward the field. "And we both like baseball." Fireworks exploded near the Kingdome roof, the paltry crowd applauded. Buhner had just homered.

Post-game notes:  On the walk back to the car we held hands and promised to stay in touch. The windows fogged up when we shut the doors and I sat there in the quiet as Heather fumbled with her keys, the first sign of nervousness she'd revealed all night. Already I was mourning her departure. The following year, when she had vanished from my life and the Mariners were making a dramatic run to their first division title, I thought of how much we owed to two decades of futility and the resulting fan indifference that had led us, thankfully, to the space beneath that blue tarp. We listened to Heather's new CD instead of the postgame show on the way home. "Sounds British," I said when the vocals came in. "Almost like a lost Beatles track."

"Not bad," I said as the Kingdome receded behind us. The next time I looked back it was gone.

Chad Schuster lives near Seattle with his wife and two kids. He earned a journalism degree from the University of Washington and, back in the day, wrote for several Seattle-area newspapers. His fiction has appeared in Glimmer Train. Follow him on Twitter at @Chad_Schuster.